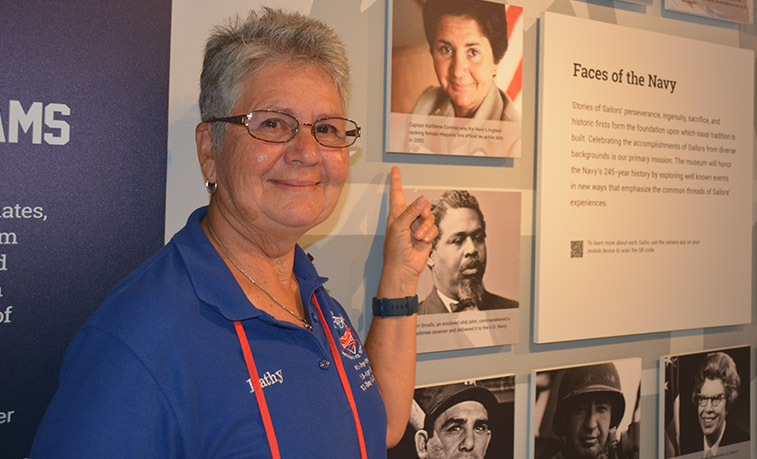 Kathy Contres, a 1977 Slippery Rock University alumna, points to her portrait hanging in the National Museum of the United States Navy during her recent visit to Washington, D.C., as part of the first-ever all-women veterans honor flight (photo courtesy of Chris Lipp).

SLIPPERY ROCK, Pa. — "Oh, was your husband a veteran?" is a question people like Kathy Contres are asked when they use a parking spot reserved for veterans or receive other benefits for those who served in the military. "No, I'm the veteran," is how women veterans respond to correct people.

"It's been that way forever, but we're finally getting the recognition," said Contres, a former U.S. Navy captain and a 1977 Slippery Rock University graduate with a degree in allied health.

Contres was recently part of the first-ever, all-women honor flight, as more than 100 female veterans of the U.S. armed forces traveled by chartered plane from Sanford, Florida, to Washington, D.C., to visit the veterans memorials and other attractions in the nation's capital. The trip was organized through the Villages Honor Flight and the Tri-County Womens Veterans Association in Florida, which raised more than $130,000 for transportation and hotels for the veterans, their guardians and staff.

Villages Honor Flight is part of the national Honor Flight Network for which veterans travel to Washington, D.C., many within a 24-hour span, and occasionally with a few women veterans joining groups consisting mostly of male veterans. In the past year, Contres, who is active in military veterans organizations, served as a guardian on two honor flights for men who served in the Korean War.

"It's so heartwarming," Contres said. "When the veterans go on these flights, they have tears in their eyes because it's just something that they never thought they'd ever get to do or receive the recognition and the acknowledgement. It's red-carpet treatment the entire way." 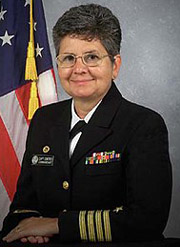 The all-women honor flight, officially Villages Honor Flight Mission No. 53, featured a patriotic sendoff and homecoming at the American Legion Post 347 in Lady Lake, Florida, May 31 to June 1, with flag-waving supporters and music. When their plane landed at Baltimore/Washington International Airport, they were greeted on the tarmac with a water salute, as the aircraft taxied under plumes of water discharged from firetrucks.

"When we got off the plane and walked to the bus, there were people lined up and applauding us and thanking us for our service, and it was like that all day long," Contres said. "Everywhere we went, even with all the high school trips -- there were a lot of high school students (in Washington, D.C., visiting the memorials and museums at the time) -- and when they heard that we were all women veterans, they would come over and high-five us. It's just so nice for the women to finally be recognized."

Women have long been part of the U.S. military, dating back to their involvement in World War II as typists, switchboard operators, mechanics and bakers, but they weren't officially enlisted until 1948. They were barred from combat until 2015.

Contres served in the U.S. Navy for 30 years. When she retired in 2010, she was the highest-ranking female Hispanic American officer in the Navy and the first Hispanic American woman to command the Defense Equal Opportunity Management Institute. The DEOMI is a U.S. Department of Defense joint services school that offers education and training and conducts research in areas of equal opportunity, intercultural communication, religious, racial, gender and ethnic diversity to optimize force readiness.

She was stationed everywhere from the Pacific, including Guam and Hawaii, to Buffalo, New York. Her most challenging assignment was at The Pentagon, where she worked in the Navy Training Directorate and managed the training budget for all shore training commands. Also, according to Contres, one of her most honored assignments was serving on President Barack Obama's presidential commissions that studied and made specific recommendations to him regarding diversity leadership in the military.

Her final duty station with the DEOMI allowed Contres to harken back to her SRU education and early career before she joined the military. A native of Spangler, in Cambria County, Contres was a teacher, athletic training and coach at high schools near her hometown, before she was allured by the opportunity to "Join the Navy and see the world," as the slogan at the time suggested.

"The things that I learned at SRU and being from a small town and attending a small college, I understood where a lot of young folks were coming from, such as a farmer who came from Iowa," Contres said. "That helped me identify with the students and the experiences that I had both at home and in college were beneficial."

Contres has been called a "Hispanic American trailblazer," but for a long time she didn't identify herself by her ethnicity because she didn't speak Spanish and her grandfather, who immigrated to the U.S. from Mexico, wanted to protect his family from some of the harassment and prejudices he faced. But she's embraced the moniker to encourage other Latinas to find a career path in the military and know that they belong and can contribute.

Still, she was surprised to discover her portrait on the wall at the National Museum of the United States Navy during her recent visit to Washington with her fellow women veterans.

"I'm walking through checking out the old ships and memorabilia and suddenly I hear people saying, 'Kathy! Kathy! You've got to come over here; you've got to see this,'" Contres said.

There, on the "Faces of the Navy," alongside portraits of John F. Kennedy, Admiral Grace Hopper and Admiral Chester Nimitz, was Contres, recognized for being the Navy's highest ranking Hispanic female line officer on active duty in 2002.

"I cried and I was so shocked," Contres said. "To be up there with people who are far, far, far more heroic and famous than I am, it's such an honor."