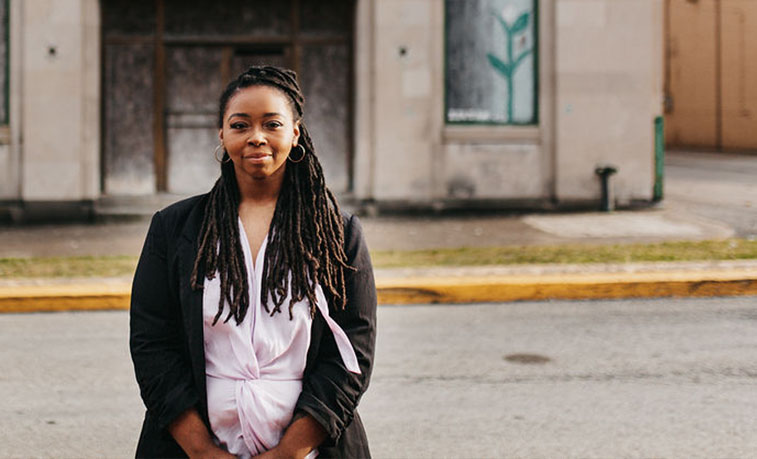 Kenya Johns, a 2014 graduate of Slippery Rock University with a degree in psychology, is set to become the first Black woman to serve as mayor of Beaver Falls after she won the primary election. She will run unopposed in November.

SLIPPERY ROCK, Pa. — As a first-generation college graduate who's now on her way to earning a doctoral degree, Kenya Johns is ready to be a pioneer for her community, not just her family. Johns is set to become the first Black woman elected mayor of her hometown of Beaver Falls in the city's 153-year history. A 2014 graduate of Slippery Rock University with a degree in psychology, Johns won the city's Democratic primary election last month and will run unopposed in the November general election, which means she'll become mayor next year, unless a write-in candidate wins, which hasn't happened in at least 50 years according to the city clerk.

But Johns is not seeking status, a historical feat or even a noteworthy entry on her resume -- she's building community and allowing voices to be heard, that aren't just her own.

"The significance is huge, not just because of my racial identity, but because of the tumultuous state of our world and people feeling like they're not being seen and heard, especially African Americans," Johns said. "It really means a lot to be able to let everyone know that (you can make a difference) with community engagement and by working together. I didn't get here alone: it was the city that got me here, it was my neighbors and their neighbors and all the people who for so long felt like they didn't have a voice. That's what inspired me (to run for mayor) because it's allowing the city to see that we can make sustainable change in our community when we work together again, we can love each other again and we can really build our city."

Beaver Falls, a community of about 8,300 residents, consists of nearly 30% racial minorities, while all of Beaver County is more than 90% white. Johns said that differences exist within Beaver Falls and there needs to be greater unity. Division has also come from outside the community with many negative views and comments about the city being perpetuated by those not from the city, according to Johns.

Among Johns' agenda items are increasing collaboration between the city and the police department and getting more women on the force.

"We have a wonderful police force, but a lot of our city and community members don't know the police officers and I think that's essential to building a stronger, more united community," Johns said. "We've also never had a female officer here, and I think that needs to change, especially when we know that there are women out there who could have an interest in going into law enforcement and that by seeing someone who looks like they do could increase the likelihood that they'll follow that path too."

That is also why a Black woman becoming mayor might have seemed unlikely before Johns' successful campaign. A licensed professional counselor, Johns has many ties to the community, from mentoring with transitional age youth to serving on the board for organizations such as TRAILS Ministry which helps people affected by incarceration. She doesn't, however, see herself as a politician.

"I didn't necessarily jump into (becoming mayor) because I wanted to be in politics, but our city really needs change," said Johns, adding that her mother, Debra, who passed away late last year, encouraged her to pursue public office. "She really raised me and my sister to be committed to our city and our community. Just talking to her before she passed, I let her know that I wanted to do this."

Johns is also currently working toward completing her doctoral degree in counseling education and supervision from Duquesne University and does diversity and equity consulting work for organizations from a variety of sectors.

She chose SRU for her undergraduate studies because of the psychology and counseling program and for the opportunities to stay close to home and be involved with people's lives.

"The best way for me to do work with people was to go into psychology and counseling," Johns said. "(SRU) is a close-knit community and that was something that I looked for and is still important to me."

Johns initially attended Temple University but transferred to SRU after which she said she "hit the ground running" and proved that she was able to succeed while also raising a family and working multiple jobs.

"My experience at SRU really shaped and developed me into the person who I am," said Johns, who worked in the Women's Center at SRU and served in several leadership and mentoring roles, as well as studying abroad. "I developed strong relationships with my peers and with my professors. I feel like there's nothing that I can't tackle or do, as long as I work hard, collaborate and am open to learn and grow."