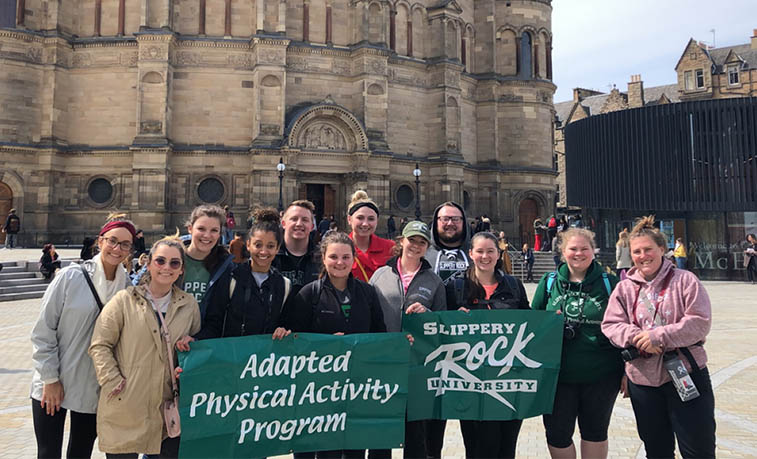 SLIPPERY ROCK, Pa. — Three of the 12 Slippery Rock University students who attended a disability sports conference in Scotland last month missed their commencement ceremony at SRU. Instead of moving their tassels from right to left upon receiving their SRU degrees, they were tapped on the head by a Scottish professor with a rugby ball in an impromptu ceremony that was inspired by a graduation tradition at the University of Edinburgh.

"The tradition is (to use) a pair of trousers, so I'm glad they used a rugby ball instead," said Zachary Baynham, a graduate student in the adapted physical activity from Finleyville. "They called us up in front about 100 people and everyone in the room knew who we were. It was a neat moment. It was a hard decision to miss graduation, but it was worth it."

The impromptu ceremony was an unexpected benefit. Baynham and his colleagues were in country to meet researchers and conduct presentations at the International Symposium on Physical Activity and Individuals with Visual Impairments or Deafblindness, known as PAIVID, at the University of Edinburgh, May 9-12.

Baynham and two other adapted physical activity graduate students, Ashley Kratz, from Honey Brook, and Daisy Hayward, from Benicia, California, chose to attend PAIVID instead of walking in the commencement ceremony at SRU, May 10, although they are still enrolled as SRU students while they complete their internships. 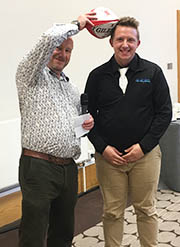 From left, John Ravenscroft, professor at
the University of Edinburgh in Scotland,
taps SRU student Zachary Baynham on
the head with a rugby ball for an impromptu
commencement ceremony inspired by an
Edinburgh tradition.

John Ravenscroft, professor of childhood visual impairment and former dean at Edinburgh, performed the ceremony in front of all the PAIVID attendees, tapping the heads of the SRU graduates with a rugby ball. Edinburgh graduates are traditionally tapped on the head with a cap believed to be made from the seat of trousers worn by John Knox, the renowned 16th century founder of the Presbyterian Church.

SRU faculty and students conducted two presentations at PAIVID, which was attended by more than 100 educators, researchers, mobility and rehabilitation specialists who are interested in sport and leisure activities for people with disabilities.

Baynham presented best practices and information about blind ice hockey. As a student at SRU, Baynham worked with a nonprofit organization, Envision Blind Sports, that partnered with the Hockey Sticks Together Pittsburgh Foundation that provides opportunities to play hockey for people who are blind or who have visual impairments.

"No one knows about (blind hockey) there and we wanted to take the sport to an international level," Baynham said. "The U.S. and Canada are the only two countries playing it right now and we want to get more countries involved so it can be a Paralympic sport someday."

There were more than 16 countries represented at PAIVID. SRU was the only organization that brought college students.

"The conference was very educational," Baynham said. "I presented my systematic review for class the day before we left and two days later I was meeting the people who did the research in the articles I reviewed, the big-name people in the field. I was starstruck."

The other presentation was led by Wendy Fagan, instructor of physical and health education, and Jillian Stringfellow, project coordinator in the physical and health education department. Fagan founded Envision Blind Sports in 2017 and has organized camps at SRU for blind or visually impaired people since 2006. Fagan and Stringfellow were invited to give a presentation with their students about how organizations like Envision Blind Sports can work with a university and how this type of collaboration can be used as a teaching tool for students.

"We have a lot of programs (through Envision Blind Sports) where students can accommodate sports and physical activity for kids and adults who are visually impaired," Fagan said. "We were asked to present but we also learned about other sports like blind rugby or blind cricket and (the PAIVID) reinforced other sports that we've just begun to learn about, like blind tennis. (The experience) made us aware of where our strengths are and where we can learn some more, and the students got to network and meet some interesting people."

In addition to Baynham, Hayward and Kratz, the other SRU student who was part of the Envision Blind Sports presentation was Brianah Misosky, a senior recreational therapy major from Painesville, Ohio, who is minoring in adapted physical activity and has worked as a counselor and coach through Envision Blind Sports.

Fagan and Stringfellow agreed that another lesson learned from the conference is understanding the needs gap for the United States in serving the blind and visually impaired population as evidenced by Envision Blind Sports servicing more than 100 clients from as many as five states.

"We, as a nation, have a lot more ground to cover and that's why it may seem like we are behind," Stringfellow said, noting that Scotland is about the size of South Carolina. "Blindness and visual impairment is a low-incidents disability, so some kids might be the only child in their school with that disability and to get services for them is very hard because people don't want to start a program for so few people or only one person. The United States has a long way to go as far as stigmas, changing perspectives and inclusion, but going to an international conference, we learned that we aren't doing so terribly. Other countries also have services that are a lot harder to get and there aren't as many opportunities or people in the field serving the population."

"A lot of people asked us, 'How do you do this (at SRU)?' or they said 'We need to learn how to do this,'" Fagan said. "Our University promotes this and they let us come during finals week. It was a good decision because you don't get to do something like this all the time, and not every university is as understanding as ours and we want our students to have these international experiences, especially when it comes to presentations."