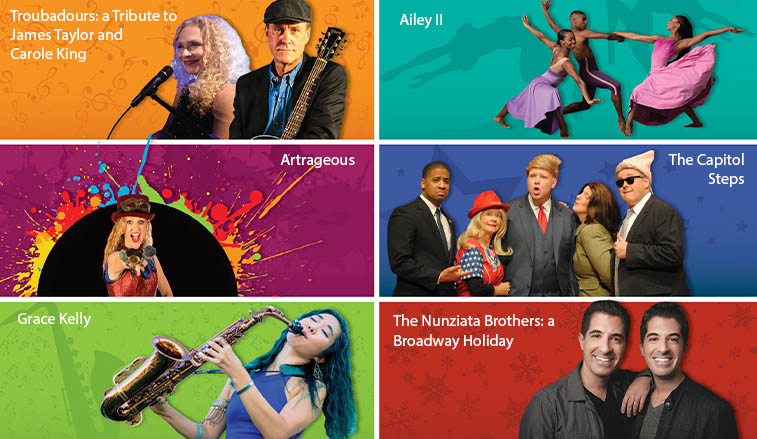 SLIPPERY ROCK, Pa. — The curtain has been drawn to reveal the Slippery Rock University Performing Arts and Lecture Series' 2021 season schedule. SRU will host an expanded variety of shows including performances in Miller Auditorium.

Miller Auditorium is part of the University's ongoing $29.2-million Performing Arts Center renovation project that started in summer 2018. The project was hit with a delay due to the COVID-19 pandemic but with construction again underway when Butler County was phased into "green" by Gov. Tom Wolf, the building is scheduled for completion in October.

In recent years, the PALS was limited to music and lectures in the University Union's Multipurpose Room with a stage and limited technology that could not accommodate certain theater and dance acts. That will change when the 753-seat Miller Auditorium opens with its permanent wood stage and 242-square-foot orchestra pit.

"We developed a season that is now filled with theater, dance and music shows," said Deb Baker, retired director of special events, who organized the 2021 PALS season. "We're very excited that we can finally bring back professional dance and theater companies to campus. We are now able to enhance our season by bringing in a broader variety of artists and types of performances that we haven't been able to do for a long time."

Although Miller Auditorium is scheduled for completion in October, there are no PALS events planned until February 2021 because of the uncertainty surrounding social gathering restrictions resulting from COVID-19. As with the entire performing arts industry, scheduled events are subject to change as organizations follow public health restrictions related to the coronavirus pandemic.

"The health and safety of our patrons is a top priority," said Baker. "If there were to be a resurgence of the virus and the University were to close again, we would of course postpone the performances in the best interest of the everyone's well-being."

To offer better flexibility for people concerned about purchasing an entire season subscription, the PALS organizers are offering "pick your series" options. Subscribers can choose ticket plans that include either four, five or all six shows. People also have the option, like they have had in the past, to just purchase tickets for individual shows.

Current subscribers will have until June 19 to re-subscribe and keep their current seats or request a change of seats. For those renewing their subscriptions, similar seating placements from the Multipurpose Room will be honored based on the configuration for Miller Auditorium. After June 19, new subscription orders will be fulfilled.

Cost for subscriptions under the new "pick your series" plan include:

Subscribers from last season should note that recently mailed PALS brochures reflect previously scheduled event dates. The rescheduled dates for the 2021 season are reflected below.

The six shows for the 2021 season include:

• Artrageous, 7:30 p.m., March 19, Miller Auditorium. Artrageous is a troupe of 11 artists, singers, dancers and musicians that combines visual art, song, dance, humor and interaction in a frenzy of movement and color with a message of the arts being an integral and valuable part of human existence.

• Grace Kelly, 7:30 p.m., April 10, Miller Auditorium. Kelly is a musical prodigy, singer-saxophonist-songwriter-composer and band leader, who has rocked the jazz world with sold-out concerts, 13 acclaimed albums and a resume that includes performing at the Hollywood Bowl and as part of the house band for "The Late Show with Stephen Colbert." She will be accompanied by the SRU Jazz Ensemble.

• Ailey II, 7:30 p.m., April 24, Miller Auditorium. Under the artistic direction of Troy Powell, Ailey II is an American modern dance company affiliated with Alvin Ailey American Dance Theater. The group is universally renowned for merging the spirit and energy of the country's best young dance talent with the passion and creative vision of today's most outstanding emerging choreographers.

• Capitol Steps, 7:30 p.m., Sept. 17, 2021, Miller Auditorium. Capitol Steps is a theater company that performs sketch political comedy. The troupe began in 1981 when a group of U.S. Senate staffers set out to satirize the very people who employed them through song parodies and skits. Capitol Steps has recorded more than 35 albums, including its latest, "The Lyin' Kings." The group has been featured on ABC, CBS, NBC, NPR and PBS.