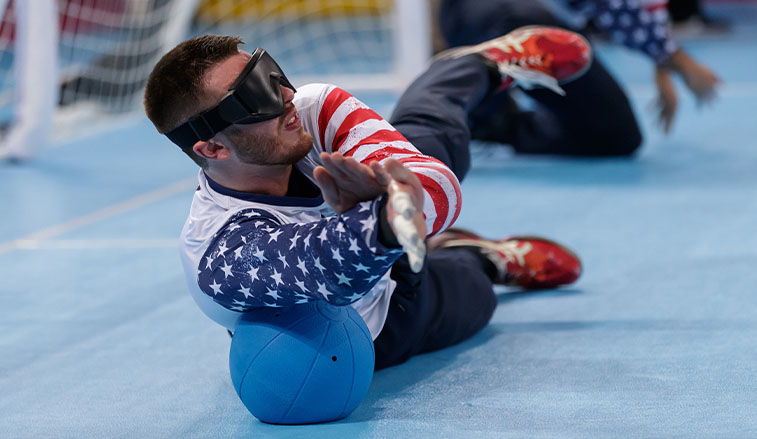 Calahan Young, a 2017 Slippery Rock University graduate, is a co-captain of the U.S. men’s national goalball team that will play in the 2021 Paralympic Games in Tokyo in August. Goalball is a sport played blindfolded that is designed for athletes with visual impairments (photo by Joe Kusumoto / U.S. Olympic & Paralympic Committee Archives).

SLIPPERY ROCK, Pa. — Trust is important in the sport of goalball. Athletes are literally blindfolded to provide an equal playing field for competitors who have varying types of visual impairments. As one of the top goalball players in the country describes trust, "you have to be where you say you are going to be."

For Calahan Young, co-captain of the U.S. men's national goalball team, he's been training intensely the last few years to be where he said he wanted to be ever since he was 12 years old.

That place is the Paralympic Games.

And while he made the U.S. national team in 2018, his first opportunity to reach the pinnacle of his sport, the 2020 Paralympic Games in Tokyo, Japan, was postponed to August 2021 because of the COVID-19 pandemic. But throughout the long delay, he's continued to trust his training, his teammates, the Paralympic organizers and, really, the world's ability to overcome a global health crisis.

"We never thought (the Paralympics) would be canceled, so when that happened it was a bombshell," said Young, a 2017 Slippery Rock University graduate with a degree in recreational therapy. "We tailored the entire year prior to the games for training, so it was really deflating and hard to stay motivated when it suddenly felt so far away. But once we got into 2021, it was reinvigorating when we learned that the games were actually going to happen."

Young, 26, has been anticipating his opportunity to play in the Paralympic Games since he first discovered the sport of goalball in 2007. Growing up in Irwin, Young played traditional sports such as basketball and football, but he couldn't compete at a high level because he developed a genetic retina condition called retinitis pigmentosa, or "RP" for short, that has gradually diminished his vision since childhood.

After learning about goalball during an adaptive sports demonstration for people with disabilities, Young enrolled in a youth camp at SRU through an organization that's now called ENVISION Blind Sports. The director of the organization is Wendy Fagan, SRU instructor of physical and health education. 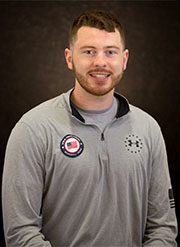 Goalball is played with a 3-pound, slightly deflated ball, about the size of a basketball. The center of the ball contains bells (think sleigh bells), so that blindfolded competitors can detect it on a 9-by-18-meter court. There are three players on the court for each team and the object is to roll the ball from your side through your opponent's 9-meter side, which is the "goal," to score points.

"People are rolling the ball as hard as they can, so it's going 30 to 50 miles per hour," Young said. "The defenders are using their bodies to dive and block the ball. It's a cool sport that most people have never heard of because, but it's hard to explain what it is. It's basically handball for the blind, but most people in the U.S. don't know what handball is."

In high school, Young played for club teams that practiced at SRU, traveling to campus at least once a week. He later enrolled at the University, but that was after his club team won two youth national championships and he was invited to train with the U.S. national team in Lake Placid, New York.

Young, who minored in adapted physical activity at SRU, is a former president of the Goalball Club Team at SRU, which features students with and without visual impairments. As all participants wear goggles that completely black out players' vision, the playing field is level regardless of a person's everyday vision.

Because of his RP, Young's vision has diminished so much over the years that he can no longer play certain sports that he could as a child or teenager. He now has no peripheral vision and compares his condition to looking through the cardboard centers of two rolls of paper towels.

"Your peripheral vision is what pulls in light so I'm night blind and my eyes don't have the ability to take in the extra lights to see what's around me, so whenever it's dark out I can't see at all," Young said. "I'm also colorblind and I have astigmatism because my eyes shake when they are always trying to see what's around me to try to pull in more information. I joke with people and say it's a cluster and I have a little bit of everything going on with (my eyes)."

Young uses a cane to walk around and he doesn't drive a car. He said people with RP usually don't end up losing all of their vision, but the condition will continue to constrict his peripheral sight.

His gradual loss of peripheral vision has inversely correlated with his increased success on the goalball court. In 2018, made the U.S. national team and traveled all over the world for competitions in places that included Lithuania, Sweden, Peru and Brazil.

"Once (goalball players) get in their 20s, they start to really hone their skills," Young said. "Through the major competitions that we go to, we are able to break down what we did and what we need to do to get better, both as individuals and as a team, and what we can bring to the table."

At 6-feet, 5-inches tall, Young's body covers two of the court's nine meters in width, but, as in basketball, achieving success requires more than just being tall. "It's like when LeBron James, Dwyane Wade and Chris Bosh played together (for the NBA's Miami Heat)," Young said. "They needed time to mesh and build rapport. You have to gain that confidence and trust with your teammates."

Young and the U.S. team placed eighth at the 2018 world championships and second at the 2019 Parapan American Games, where Young scored 15 of the team's 62 goals. That tournament in Peru qualified the U.S. for the Paralympic Games in Tokyo.

Young lives in Fort Wayne, Indiana, where he volunteers as part of a residency program at Turnstone, an organization and facility that provides rehabilitative, educational, wellness and other recreational programs for people with physical disabilities. Turnstone is also where multiple U.S. Paralympic national teams train, including the goalball team. Young, who trains or practices almost every day, is also a full-time graduate student. He plans to complete an online degree in health care administration from George Mason University in June 2021.

His goal, other than winning gold at the Paralympics, is to be an administrator or consultant with a health care organization. He credits his experience at SRU for putting him in the position he's in now, on and off the court.

"SRU gave me so many different opportunities and I was able to utilize so many different resources," Young said. "I was able to grow and learn and I still have all the skills that I took from those experiences and kept my edge (as a goalball player) while I was in school. A lot of people don't have the opportunity or a place where they can train."

Young is also grateful to be able to train again with his U.S. national team, which consists of a pool of nine players, including six that will go to Tokyo. With the Paralympics delayed a year, his training and practice only intensified as he and his teammates waited for normal life to resume.

Although Turnstone was closed for training for the first four months of the pandemic, four of the team members resumed workouts at physical distances last summer. It wasn't until March 2021, after a full year of the pandemic and some players who live outside of Fort Wayne were vaccinated, that all nine players practiced together. No international competitions have taken place since March 2020, but there were some domestic tournaments this spring.

Young said the pandemic gave the players an extra year to adapt to a new coach, Keith Young (no relation), who took over the team in late 2019.

"It was hard because we went awhile without interacting in person," Calahan Young said. "But in other ways, it was good because it gave us an extra year to become a cohesive group. If you have one weak link, that will make the whole thing fall apart, so I think we got stronger as a unit because of this."

While Young was talking about his goalball team, the same can be said about the fragility of the wider world, and the wide world of sports, all of which fell apart but is coming back together before our very eyes.

For more information about the U.S. men's national goalball team, visit the U.S. Association of Blind Athletes website. The team's first game in the Paralympics is scheduled for Aug. 26. A complete schedule is available on the Tokyo 2021 Paralympics website.