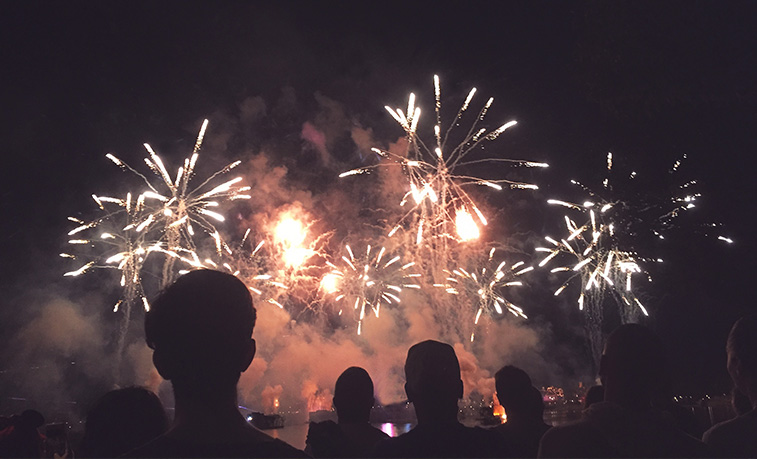 Pennsylvania residents are urged to adhere to ordinances of their local municipalities and follow the necessary safety precautions when celebrating the Fourth of July.

SLIPPERY ROCK, Pa. — Pennsylvania residents' access to fireworks went from boom to KABOOM when the commonwealth updated its fireworks laws two years ago, but that doesn't mean residents should be less mindful when celebrating Independence Day, July 4. In fact, the opposite is true.

Under the Fireworks Law, Act 43 of 2017, consumer-grade fireworks including bottle rockets, Roman candles and firecrackers containing a maximum of 50 milligrams of explosive material, became available to consumers. Previously, under legislation from 1939, only ground-based fireworks, such as fountains, were allowed. Display fireworks, such as aerial shells, still remain illegal in Pennsylvania unless used by trained pyrotechnicians who obtain a permit from a municipality.

Some restriction still apply: you must be at least 18 years old to purchase, possess and use consumer fireworks in Pennsylvania; you cannot intentionally ignite or discharge consumer fireworks on public or private property without the permission of the owner; use fireworks while under the influence of alcohol or a controlled substance or another drug; or use them within 150 feet of an occupied structure.

Despite the newer regulations, Slippery Rock University Police recommend that people contact their local municipality before setting off fireworks, because some communities might have more stringent laws.

"You should first check with your township or borough to see if there's an ordinance on shooting fireworks," said Kevin Sharkey, acting chief of University Police. "The state law changed on which type of fireworks you can have, but fireworks are still explosives and you have to know what you are doing before setting them off."

Slippery Rock Borough has an ordinance that restricts the storage and discharging of any fireworks within the borough except in licensed public exhibitions approved by the mayor and borough council. Fines for such summary offenses can be as much as $1,000.

"Codes vary among municipalities, but there are greater risks within a borough because there are more buildings closer together than in a rural area," said Christian Laskey, a senior geography major from Slippery Rock, who is serving an internship this summer as Slippery Rock Borough's code enforcement officer. "This helps make Slippery Rock a better and safer place to live."

According to the Insurance Journal, at least eight people lost their lives in fireworks mishaps in 2017 while nearly 13,000 others ended up in hospital emergency rooms with injuries.

The deaths in 2017 included a four-year old Wisconsin girl who died from shrapnel when a metal tube filled with sparklers exploded after being set off by her father in their yard.

The Consumer Product Safety Commission has received an average of seven fireworks-related death reports a year since 2002.

Burns to fingers, hands and arms are the most common injury.

• Never allow young children to play with or ignite fireworks.
• Avoid buying fireworks that are packaged in brown paper because this is often a sign that the fireworks were made for professional displays and that they could pose a danger to consumers.
• Always have an adult supervise fireworks activities. Parents don't realize that young children suffer injuries from sparklers. Sparklers burn at temperatures of about 2,000 degrees - hot enough to melt some metals.
• Never place any part of your body directly over a fireworks device when lighting the fuse. Back up to a safe distance immediately after lighting fireworks.
• Never try to re-light or pick up fireworks that have not ignited fully.
• Never point or throw fireworks at another person.
• Keep a bucket of water or a garden hose handy in case of fire or other mishap.
• Light fireworks one at a time, then move back quickly.
• Never carry fireworks in a pocket or shoot them off in metal or glass containers.
• After fireworks complete their burning, douse the spent device with plenty of water from a bucket or hose before discarding it to prevent a trash fire.

The easiest way to remove any potential risks or dangers while celebrating America's independence is by leaving the fireworks display up to the professionals. Many local communities will provide residents with fireworks shows on July 4, including: