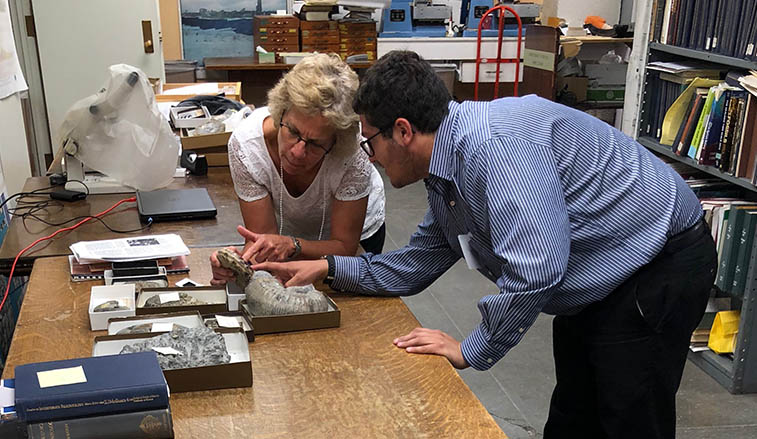 From left, Tamra Schiappa, Slippery Rock University professor of geography, geology and environment, studies a fossil with senior geology major Nico Russo at the Carnegie Museum of Natural History in Pittsburgh. As part of a summer research project, Russo is spending the summer plotting fossil locations on a geographic information system map.

SLIPPERY ROCK, Pa. - Many students help put Slippery Rock University on the map with their undergraduate research, but one student is representing SRU by actually putting rock locations on a map.

Nico Russo, a senior geology major from Sarver, is spending his summer working with the Carnegie Museum of Natural History in Pittsburgh by plotting locations in the greater Pittsburgh area where fossils in the museum were found and where people can go to possibly discover more remains that are 300 million years old.

"I like to study outcrops, see the depositional environment and see what past life might've looked like," Russo said. "I want to put these outcrops on a map so people who are interested in geology can go to them, study them and enjoy them because some are hard to find."

Thanks to a Summer Undergraduate Research Experience grant from the University, Russo is getting paid to conduct research that will ultimately benefit the public. Russo is tasked with matching up the descriptions of where fossils at the CMNH were recovered in Pittsburgh and the surrounding areas, determining their coordinates and using software to plot them on a geographic information system map.

"(Nico) is creating a map for non-scientists," said Tamra Schiappa, professor of geography, geology and environment, who is president of the Pittsburgh Geological Society and has maintained relationships with the CMNH to connect additional SRU students with research opportunities. "Thinking about how people who are not familiar with GIS can manipulate the map will be a challenge for him. He's had several classes in GIS, so he's able to apply what he has used here at SRU to create something for the public and that's something that is unique. Most people never use maps because they have a phone to tell them where to go."

Learning GIS has inspired Russo to pursue a career in industries that rely on this technology, such as the oil and natural gas industries. But rather than locating fossil fuels, Russo is helping people locate fossils, mostly from the Pennsylvanian Age, a geologic time period between 285 and 320 million years ago named for the state where coal-productive beds of this age are widespread.

Russo is plotting more than 270 locations where fossils such as corrals, bryozoans, brachiopod, crinoids and trilobites can be found. For example, there's an outcrop near the Freeport/Millerstown exit along Route 28 and the museum has only a vague description of where the fossils where recovered. Russo is not only plotting the longitude and latitude coordinates but directions using landmarks such as businesses and roads with the help of street view images on Google Maps.

"As a student, this research helps me sharpen my GIS skills that I can put on my resume," Russo said. "I also develop relationships by working with the museum staff and working with my professor, which will make me a better student."

In addition to Schiappa, Russo will work with Albert Kollar, collection manager of invertebrate paleontology at the CMNR, who could potentially implement Russo's work into an exhibit at the museum. Russo plans to present his research at the PGS Student Night meeting next year, as well as other conferences such as the SRU Student Symposium for Research or the Geological Society of America.