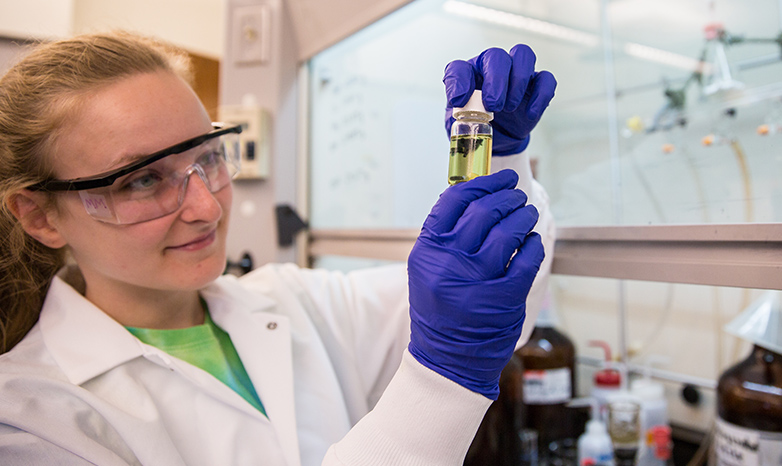 SLIPPERY ROCK, Pa. - You probably think jigsaw puzzles are difficult to put together and easy to take apart. For McKayla Miller, it's the exact opposite.

Miller, a junior chemistry major from North Ridgeville, Ohio, is spending her summer in the chemistry lab trying to solve ways to deconstruct a puzzle - an amino acid puzzle. As a recipient of a $725 Summer Undergraduate Research Experience grant, Miller is attempting to find ways to prevent carbon chains from stacking like puzzle pieces via her research topic, "Synthesis of Complex Alpha, Alpha Dialkylated Amino Acids."

The carbon chain stacks in question can form the plaques in the human brain that cause Alzheimer's disease. While Miller isn't testing cells or cultures, her research could help other scientists understand more about amino acids, which are the organic compounds that are often described as the building blocks of the body.

"This research can provide some foundational insights in how these amino acids work so people can use these more appropriately or optimize the way they use them," said George Lengyel, assistant professor of chemistry. "McKayla had an interest in doing the research and she's been very successful in her chemistry courses, so it's been a good fit."

Miller is testing different ways to add two alkyl groups, or "dialkylations," to disrupt the carbon chains from stacking. Part of her testing process involves isolating amino acids from compounds and determining how they react to extreme conditions, such as when mixed with stronger acids or exposed to high temperatures.

It's a research role she is embracing, as well as the opportunity to learn outside of typical laboratory exercises, where students follow steps with expected outcomes.

"I've taken labs for chemistry but this is different because it's more problem-solving," said Miller, who is spending four mornings per week throughout the summer in SRU's organic chemistry laboratory. "The hard thing about chemistry is you can't just look at something and know that it worked. Molecules are so tiny (that) you don't know what you have. Every time you do something you have to test it and characterize it."

After her research is completed, Miller plans to present her findings at state and regional conferences next spring and potentially at the American Chemical Society's national meeting in August 2018.

Her future plans are to attend graduate school and conduct further research, which makes her experience this summer an important step in her development.

"After being here for a while and getting comfortable with it, I'm enjoying it and it made me feel more comfortable about going to grad school," Miller said. "It's put more things into perspective."