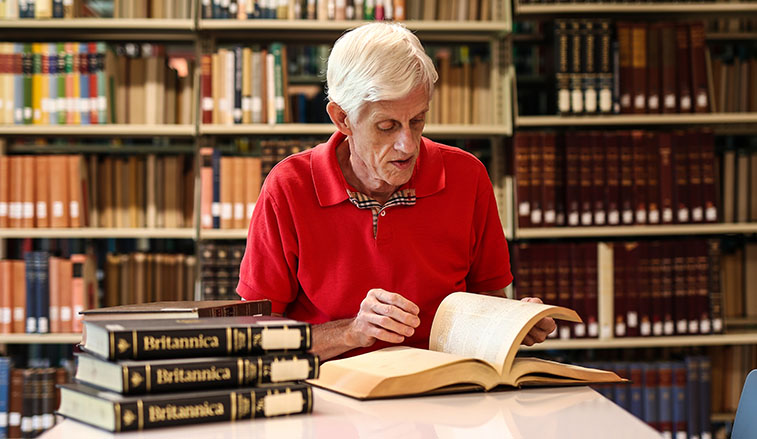 SLIPPERY ROCK, Pa. - The Encyclopedia Britannica is celebrating its 250th anniversary this year, but at schools like Slippery Rock University few students are likely to recall ever opening an encyclopedia, let alone appreciating that the most venerated encyclopedia was first published in 1768. After all, Encyclopedia Britannica discontinued its printed editions in 2010 and the last edition on the shelf at SRU's Bailey Library is from 2007.

"By that time, it wasn't missed," said Lynn Hoffmann, SRU assistant professor of library and research services librarian. "Everyone uses the computer for a quick, initial inquiry. Students first reaction now is to Google a topic, but before (the internet) the first reaction was to go to an encyclopedia."

Although printed encyclopedias, particularly the most scholarly Encyclopedia Britannica, are rarely used, they once served as an essential reference tool at all levels of education, paving the way for the convenient and inexpensive digital sources.

"Encyclopedias were the original worldwide web," said Jason Hilton, associate professor secondary education and foundations of education. "There was a time when you couldn't connect to the rest of the world and encyclopedias gave you that insight and they contained what people knew about everything. Whereas now, with the world at your fingertips by using the internet, you don't need to spend time exploring encyclopedias."

Before the internet was available in homes in the mid to late 20th century, families purchased encyclopedias, often from door-to-door salesmen at exorbitant costs. According to Hoffman, not many families could afford Encyclopedia Britannica, which cost $1,400 for its final set in 2010 and only wealthy people or libraries carried it, but encyclopedias like Compton's or World Book were popular choices for families wishing to enhance their children's education.

Encyclopedia Britannica continues to produce content, describing itself as "a global digital media company with products that promote knowledge and learning," and asserting that the online encyclopedia "is very much alive -- more than ever, in fact, in many digital forms, online and on mobile devices."

"Encyclopedia Britannica was the standard by which all of them were judged," said Hoffman, referencing, somewhat poetically from a Wikipedia entry that Encyclopedia Britannica was written by some of the most advanced scholars, including 100 full-time editors and 4,000 contributors, which included 110 Nobel Prize winners. "If you were to cite the Encyclopedia Britannica, that was good; it wasn't questioned. The authors were some of the best researchers and writers in their fields at the time. There was a sense that it was more accurate and it certainly was authoritative as possible knowing it was put in print. There may not be that same sense as writing online because it could be easily edited or changed."

However, there was a shift from the reliance on encyclopedias, which would publish volumes with corrections or updates each year, to open-source platforms like Wikipedia that could be corrected immediately. As Hilton notes, there's a tradeoff.

"One of the benefits of the encyclopedia was you knew who the experts were," Hilton said. "They could control it. Now, online, everyone's an expert. That opens the door for more people to have a say in what people know and people who pretend to be experts who aren't. That's a loss, but also a gain. It's a two-edged sword."

While college students now have access to a wide array of digital scholarly sources and online journals, the initial inquiry to research topics is done through internet search engines, leaving encyclopedias relics of the past.

According to Hoffman, Bailey Library once maintained four to five sets of encyclopedias, including Encyclopedia Britannica, that were ordered on a rotating basis but not every year to save costs, much like computers are replaced and upgraded every four years. Once a new encyclopedia was purchased for the reference section, the older version was offered through circulation before being completely removed from the shelves after another cycle.

Bailey Library still has the first edition of the 1771 Encyclopaedia Britannica, which included just three volumes and 2,391 pages, although it's a facsimile published in 1971 to celebrate its bicentennial. The last printed edition in 2010 included 32 volumes and 32,640 pages.

A safe claim can be made that almost no college students today grew up in a home that had an encyclopedia on the shelf.

"Not unless they were there as some type of relic of a distant past," Hilton said. "They will be in a museum exhibit someday where young people will look at them and say, 'I can't believe people had to look things up in these rather than just Googling it.'"