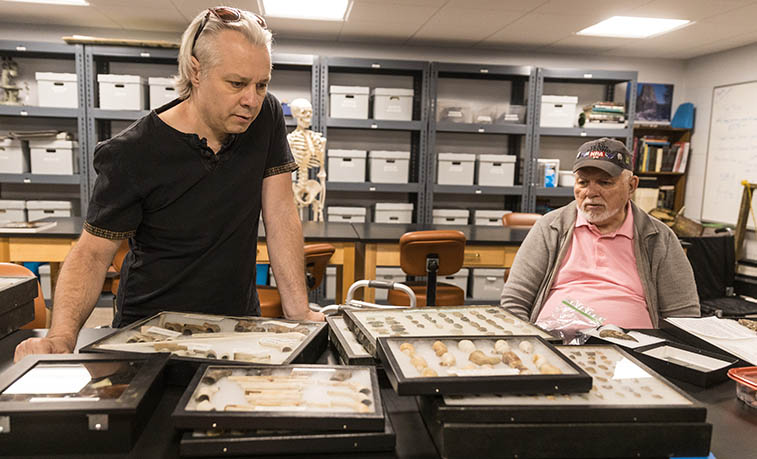 SLIPPERY ROCK, Pa. — Accompanied by family members carrying several boxes of his belongings, Edmund Dlutowski arrived at Slippery Rock University this summer ready to let go of a big part of his life. Far from being a first-year college student transitioning to adulthood, Dlutowski, 82, is a retired archeologist/engineer who visited the archeology lab at SRU that bears his name to donate the remainder of his collection of archaeological artifacts.

"Everything is difficult (to let go of)," said Dlutowski, who, along with his wife, Ginger, recently moved in with his daughter and son-in-law in Butler. "When we moved back, they made me get rid of a lot of things. Maaaade me."

Dlutowski, with his wry sense of humor, emphasized a reasonable request to prevent his collection of thousands of years old arrowheads, 200- to 300-year-old clay pipes and other artifacts from being stowed away in boxes.

"I said, 'I know just the place for all this stuff,'" Dlutowski said. "Whatever the students can learn from them, I'll be happy. Because I like SRU. I've worked with Dr. (Srinivasa) Mani (retired SRU anthropology professor) for many years and I've lectured his students."

This is not the first time Dlutowski donated his belongings to SRU. Following his retirement in 2014, Dlutowski donated his library, excavation tools and much of his artifact collection to the University, the Archaeology Club at SRU and the Old Stone House, a historic site near Slippery Rock that is operated by the University. Dlutowski conducted excavations at the Old Stone House from 2010-14, some alongside SRU students, and he oversaw other archaeological fieldwork in western Pennsylvania.

In 2017, the University named a first-floor room in Spotts World Culture Building the "Edmund Dlutowski Laboratory for Archaeological Science." That lab will now house the remainder of Dlutowski's collection, curated by Aksel Casson, assistant professor of nonprofit management, empowerment and diversity studies, who teaches courses in anthropology and archaeology.

"We appreciate this and we'll get a lot out of it," Casson said. "These artifacts aren't going to just be in a laboratory but they will be enjoyed by all. This will give the students an opportunity to show off their skills through research and telling a story. I'll have them work on projects ranging from artifact illustration to determining the provenience for these pipes and projectiles."

SRU already has hundreds of projectile points such as arrowheads from the Ohio Valley that date back thousands of years. The latest donations from Dlutowski nearly doubles the projectiles collection. But a new addition are the clay pipes, from the 17th to early 19th centuries, which were used to smoke tobacco and are known as "tavern pipes." Some of the bowls have carved patterns or other decorations, and had stems ranging from five to 15 inches long from the mouthpiece to the heel, but almost all bowls recovered have the stems broken off because they are so fragile. One pipe in Dlutowski's collection was dated from 1755 as it was found at the site of the Battle of the Monongahela near Braddock.

"An object like this can change quite a lot for a student who is researching the Battle of the Monongahela," Casson said, who envisions collaborations with the University Archives and the History Department.

"And you wonder who smoked it," Dlutowski added. "What a story you could tell."

Also in Dlutowski's collection are pieces of soapstone pottery bowls from the late Archaic period (between 4,000 and 1,000 B.C.) found in northern Florida, and pieces of pottery found from the Woodland period (1,000 B.C. to 1,000 A.D.) that were stamped with wooden paddles to carve various designs. The designs were rare for the time period but distinct for the indigenous tribes who lived in what is now present-day Georgia.

Dlutowski acquired his collection from his fieldwork, site excavations, and some, such as clay pipes from England, by purchasing from other collectors and through websites such as eBay.

"There was a lot of sweat equity here and field walking," Dlutowski said.

A native of Butler, Dlutowski worked for ARMCO Steel for 27 years before retiring as a senior design engineer, but he continued working as one of the area's top archeological experts until 2014 when he and his wife moved to Monongahela. Dlutowski recently moved back to Butler to live with his son-in-law and daughter, Susan and Jim Dankovich.

"A big part of our community engagement and collaborative work are relationships like the one we have with Edmund," said Casson, who hopes to continue an installation of artifacts at the Slippery Rock Community Library. "I consider Edmund a mentor. He's helped me find a community of archaeologists in the region. The local insider information (of artifacts and excavation sites) is often limited to just a few people."

Casson anticipates students will be talking to Dlutowski in the coming semesters as they analyze his collection.

"Our students can help fill in some of those blanks with their research and get more of that context," Casson said. "There are quantitative things that students can do, but there is also the qualitative and historical, and that's probably richer for analysis."

Dlutowski may have let go of his rich collection of history, but now he can share the wealth.

"You've got it all now," said Dlutowski, turning toward Casson who was unboxing the materials. "And I can't think of a better guy and better place to give it to."

More information about the anthropology program at SRU is available on the program's webpage. 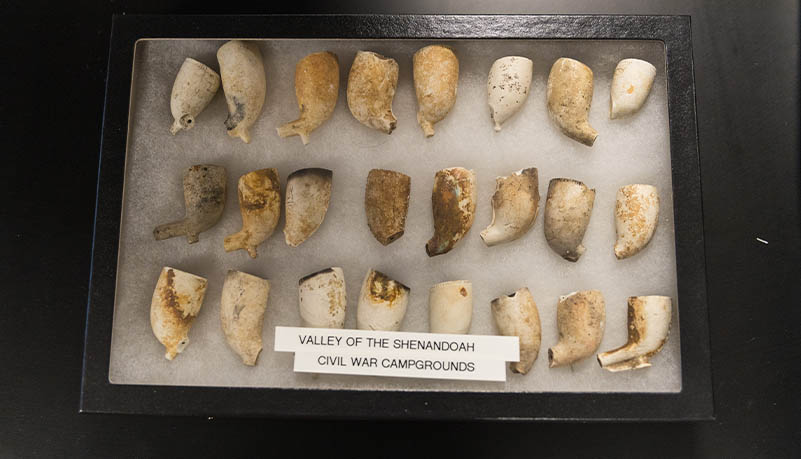 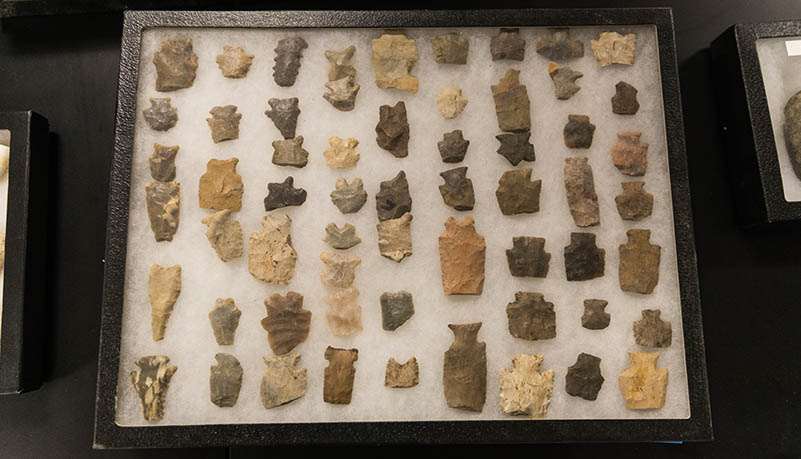 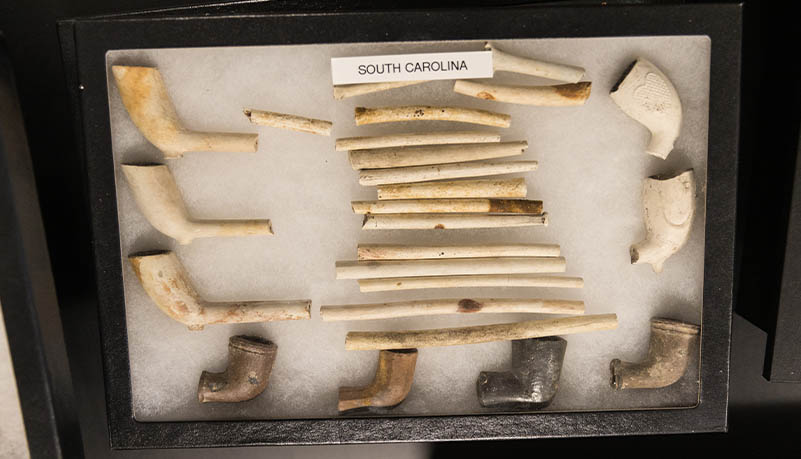 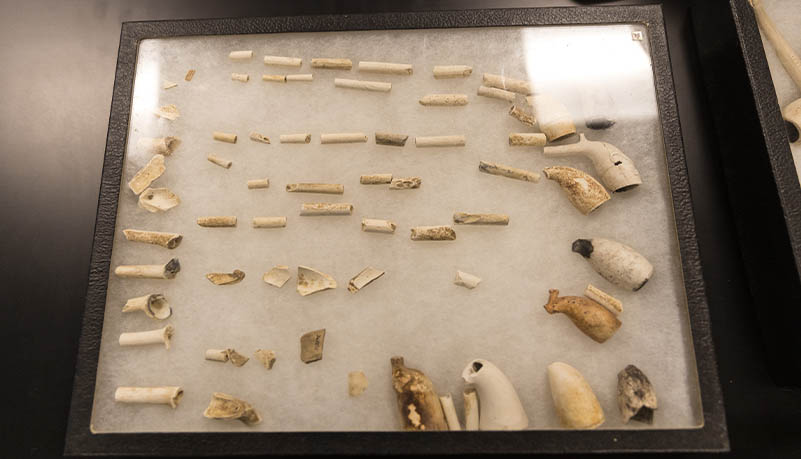 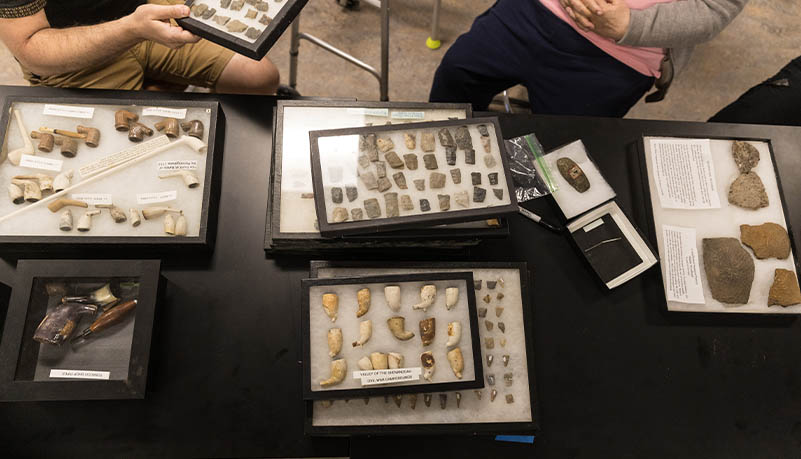