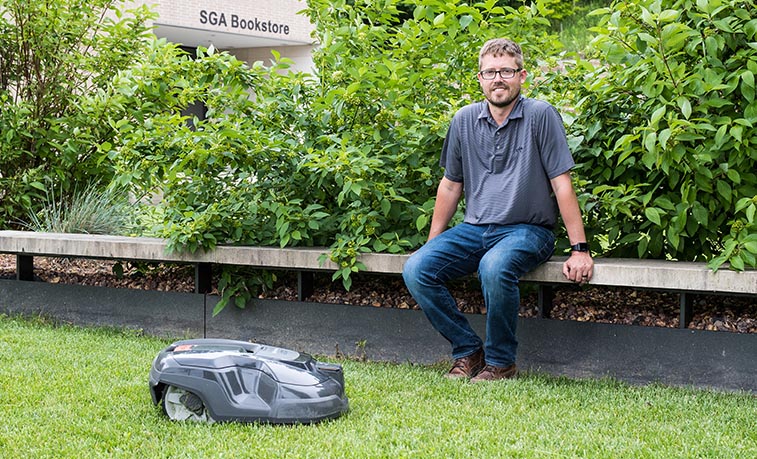 SLIPPERY ROCK, Pa. — As soon as they saw it traversing the courtyard outside the Smith Student Center at Slippery Rock University, passersby started asking Dallas Cott questions: "What is that?," "What's it doing?," "Is that what I think it is?" and "Is that a ... mower?" To answer the latter, yes, it is a mower. A Husqvarna Automower 315X, to be exact.

Cott, assistant director of campus services, and his staff received a $2,000 Green Fund grant from the University to purchase the device. It will be deployed to cuts the grass in the highly visible, quarter-acre courtyard outside the south entrance of the SSC.

"This is a high-profile area that a lot of students and parents see, so it's important to keep it well-groomed at all times," Cott said. "We can't get a riding mower into the courtyard, so we had to bring in a push mower. (Having this Automower) allows us to focus that couple hours of labor per week elsewhere on campus."

The two-square-foot Automower 315X can cut up to 0.4 acres and run up to 70 minutes on one charge of its 18-volt lithium ion battery. It then retreats to its own nearby charging station, where it will charge itself for 60 minutes before resuming its schedule. The Automower is operated by an app on Cott's smartphone, and is capable of mowing whenever Cott sees fit, even in the rain.

"You can set (the schedule) and it will run week after week on that program," Cott said. "I'll get a notification (through the smartphone app) if it gets stuck or if someone picks it up, before it goes into shutdown mode. If it does that, I have to enter a code to get it to work again. The onboard GPS system ensures that it is mowing efficiently as it learns its terrain and makes adjustments accordingly. There's also theft tracking on board so in case someone steals it, we can easily locate it. It's also alarmed."

The Automower is also quieter, emitting only 60 decibels, compared to 90 for a gas-powered push mower. However, according to Cott, the largest benefit is saving time.

"We couldn't keep up with this courtyard as much as we should have because it is all hand work," Cott said. "I wanted to improve that and this is the best way to do it."

Cott's grant proposal was accepted by SRU's Green Fund Advisory Board, which reviews submissions from faculty, students and staff for sustainable-progressive projects, educational programs or activities that promote sustainability on campus and in the community. Each semester, more than $35,000 is available for projects that can cost up to $20,000, such as recycling containers, electricity-monitor systems and the Slippery Rock Student Government Association's bus transit service.

Cott said that despite recent advances in technology the limitations of having Automowers cut grass elsewhere on campus is the cost of additional mowers and land coverage: Husqvarna's most advanced model can cut up to 1.5 acres. He also said any additional Automowers would not replace workers on campus and the labor time would be allocated to other tasks like landscaping and trimming.

"It does need a name if someone wants to come up with it," Cott said with a smile.