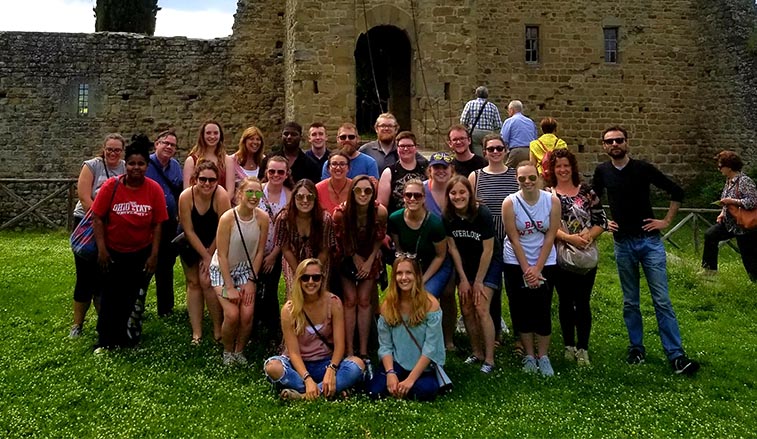 Slippery Rock University students in two summer classes offered by the English Department traveled to Italy, May 16-30, for a study abroad excursion that included sightseeing, pasta cooking lessons from an Italian chef and retracing the footsteps of the poet Dante.

SLIPPERY ROCK, Pa. - A pair of summer courses offered by Slippery Rock University's English Department recently traded in lectures halls and white boards for a small Tuscan village where they stayed in a convent with a view of a medieval castle.

Twenty-three students from the Italian Literature: Dante and Our Journeys class and the Food and Travel Writing course visited Italy, May 16-30, during SRU's summer pre-session.

"There's no teaching experience that can compare to actually visiting the country and experiencing the culture," said Rachela Permenter, professor of English, who began taking SRU students to Italy for a spring break study abroad program in 2005 before switching to a summer session in 2011. "In just two weeks, you see students change radically. That doesn't happen in the regular classroom."

Both Permenter and Mark O'Connor, associate professor of English, marveled at how transformative the experience was for their students, some of whom had never flown on an airplane before, and how much self-confidence they developed during the class.

"Italy overall was a growing experience for me," said Cortney Claypoole, a sophomore exercise science major from Hilliards. "The trip allowed me to learn about myself and about life and I gained confidence in myself throughout the trip from speaking Italian, to reading maps and answering questions in class. I feel as if I could do anything now after conquering Italy."

"They didn't think of themselves as world travelers before this trip but they absolutely did afterward," said O'Connor, who teaches Food and Travel Writing. "Having them see places like the Colosseum in person, even though they've seen it in movies or in books, is extraordinarily different and the students were moved by that. We're showing them some of the most beautiful and extraordinary places on the planet."

"Plus, the food is amazing," O'Connor added, noting that the food incentivized students from Permenter's Italian Literature class to "assist" his students.

"I half-kiddingly told my students, 'Why don't you go do some homework in Florence and eat gelato,'" said O'Connor, who assigned his students an essay comparing tourist gelato to the more authentic, artisan gelato. "(Permenter's) students were certainly willing to help them with their homework."

Although students from both classes had different reading and writing assignments, their experiences were similar and often complemented one another, like when Giorgio Mariani, a professor at the University of Rome, conducted a lecture, "American literature in Italy," before showing the group the best places to get gelato.

After three days in Rome, where they visited popular tourist attractions like the Vatican, the Sistine Chapel and the Pantheon, the students spent a week in Florence. Although they visited tourist attractions in Florence, such as Michelangelo's David sculpture, they lived more like residents, living in apartments where they cooked for themselves with food purchased from local markets. However, they did have the help of an Italian chef, Marcello Dall'Aglio, and his pasta maker, Elena, who taught the group how to make tortellini and tagliatelle from scratch. Many of the students were moved by the experience, journaling how preparing food reminded them of their grandmothers while recovering a lost sense of community and appreciation for preparing food.

"The students got to see how much work is involved in cooking (from scratch), which is why hardly anyone does it anymore," said O'Connor, noting the growth of the slow-food movement which stresses cooking with local ingredients and taking time to prepare natural foods rather than eating food that is loaded with preservatives. "We're trying to show them community and how we all can eat really well and inexpensively."

Whereas O'Connor's students wrote non-fiction about food and travel experiences, including the practice of "Flâneur," where they intentionally got lost, Permenter's students were retracing the steps of Dante, the Late Middle Ages poet who was born in Florence. With daily readings of Dante's "Inferno" from "Divine Comedy," students wrote travel journals and conducted a literary journey of self-discovery.

"It sounds pretty weird because 'Inferno' is a journey through hell," Permenter said. "But Dante's journey is one of self-discovery by finding out who you are and how to live in the world. It's a basic hero's journey of getting your own courage and strength."

The students followed Dante's footsteps to the Tuscan village of Poppi, where they stayed in a convent and monastery near a medieval castle, Castello dei Conti Guidi, where the poet once lived in exile.

"Studying Dante's 'Inferno,' while simultaneously exploring the country in which he wrote, elevated the reading experience exponentially," said Amanda Brash, a senior English literature major from Pittsburgh. "Almost every site we saw in Italy directly related to Dante's life or writing and seeing the cities firsthand helped to make sense of it all. Being in a different country gave me a better understanding of myself and the things I want to pursue."

"This study abroad opportunity truly feels like it is still and will forever be a dream," said Patrick Freed, a junior professional writing major from Wampum, who was grateful for capturing the memories by journaling in his moleskin notebook. "Our itinerary was crammed so chock-full of sights and adventures that it felt like we spent much more time there than just two weeks. Every day was exciting and enriching in some form or another."