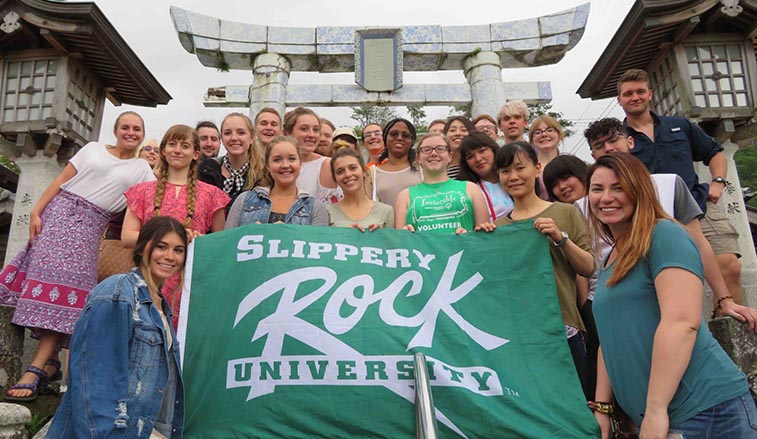 Twenty-four Slippery Rock University traveled to Saga, Japan, for a cultural immersion program in May as part of SRU’s partnership with Saga University. The SRU contingent visited the Saga Shrine and participated in cultural workshops, a peace ceremony and interacted with students at Saga University and nearby secondary schools.

SLIPPERY ROCK, Pa. - While words are often the easiest way of relaying thoughts and expressions to one another, students from Slippery Rock University and Saga University in Japan have experienced the meaningful impact of unspoken communication and the part it can play in better understanding each other's languages and cultures.

Twenty-four SRU students recently traveled to Japan for a cultural immersion experience, where they communicated not only through words but also through unspoken gestures: creating origami cranes as part of a peace ceremony, playing picture games with elementary students and picking tomatoes with agriculture students.

"I learned a lot of about the Japanese culture and language from staying there," said Wayne Bloom, a sophomore psychology major from Everett, who despite having taken two semesters of Japanese language at SRU had never visited Japan previously and sometimes needed to communicate non-verbally. "The ability to communicate without words is something I learned how to do."

Bloom, who lived with the Fujiwara family in Saga as part of a homestay, adapted through language as well as gesture, but he was clearly able to interpret kindness from the people he encountered.

"The politeness and being good people is built into the culture; it was impressive," said Bloom, who fondly recalled students at an elementary school affiliated with Saga University lined up along the windows waving goodbye after a visit from SRU students.

Students from SRU's Honors College, the Topics in Japanese Culture course and sections of Japanese language courses traveled to Saga, Japan, May 16-28. Thirteen of the 24 students stayed with families. Seventeen students extended their visit through June 4 in order to visit additional Japanese cities - including Kyoto, Osaka, Nara and Tokyo.

Yukako Ishimaru, SRU instructor of modern languages and cultures, co-led the trip with George Brown, professor of political science and director of the Honors College. Ishimaru, a 2003 Saga University graduate, helped establish SRU as one of four American institutions to partner with Saga University. The partnership, created in 2011, has grown from one or two exchange students participating for a full semester, to this year's visit by a group of SRU students to take part in a cultural immersion experience. Twenty Saga students, 10 each semester, visit SRU each year for similar, 10-day experience.

Bloom was paired with a Saga student, Nanami, as a conversation partner last fall when Bloom took Japanese 101 and Nanami was visiting SRU. He was again matched with her in May for his visit to Japan.

"Throughout this program our students interacted with Saga students and local people so they had a hands-on experience with Japanese culture," Ishimaru said. "It's more focused on authentic, everyday life as opposed to the tourist experience."

After taking workshops in origami and kumihimo, a Japanese form of braid-making, SRU students participated in a ceremony at the Nagasaki Peace Memorial and Atomic Bomb Museum, where they contributed origami cranes that they made along with Saga students' cranes as part of a Japanese tradition of collecting 1,000 origami cranes for wish-granting, happiness and good luck.

Ishimaru hopes to see the partnership between SRU and Saga continue to grow, especially with arts students learning Arita porcelains, because the students could benefit from having more opportunities to experience different cultures.

"I would like to see more variety of students take an opportunity to broaden their horizons to become effective global citizens," Ishimaru said. "This immersion program at Saga and SRU has been benefiting everyone. Students are hesitant at the beginning as they assume that the others are too different. However, they all realize that there are, of course, differences but also similarities, which is an eye-opening moment for them. They are able to immerse with other cultures and different people without going abroad (for an entire semester), and that experience becomes a stepping stone."