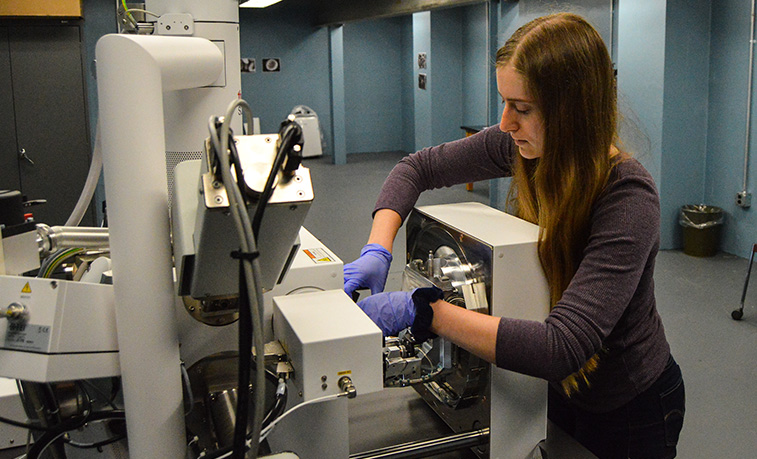 SLIPPERY ROCK, Pa. — To the unknowing observer, the rock wall shouldering the Trans-Canada Highway, where the road sidles the banks of Kama Bay near Nipigon, Ontario, is just that, a rock wall. But for a faculty-student research team at Slippery Rock University, the site demands a much closer look.

Fortunately for Logan McIntyre, a junior dual environmental geoscience and modern languages and cultures major from Volant, she doesn't have to travel to Canada to check the rocks out. Instead, she is looking at dozens of rock samples from the outcrop, each the size of a postage stamp, magnified 200 to 500 times on a computer screen at an SRU laboratory and under a scanning electron microscope at Indiana University of Pennsylvania. The samples came from a 1.4-meter slab of diabase igneous rock taken from the Kama Bay outcrop in 2008 by Michael Zieg, SRU professor of geography, geology and environment.

"This is the coolest thing I've ever worked on," McIntyre said. "I really like geology and it's exciting to learn new things and use sophisticated technology, but also -- and this might sound corny -- it's just really beautiful to look at. It (the rock sample) looks like just a black slab but when you zoom in, there are all these crystals that you would've never seen with the naked eye." 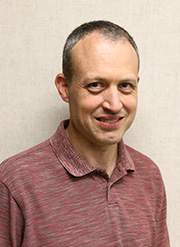 While McIntyre wasn't sure what she'd discover, Zieg knew exactly what she'd find. As a graduate student at Johns Hopkins University, Zieg studied the cooling and crystallization of magma to form igneous rock, which is black, volcanic rock. He read about the Kama Bay outcrop, an example of a sill, which is a sheet of igneous rock that runs parallel to existing rock and is formed when liquid magma fills a deposit and is cooled to form an intrusion of rock.

Zieg said the Kama Bay sill is not coveted by geologists despite exposed sills being relatively uncommon in North America. In previous research with other students at SRU, Zieg studied a sill found near Nipigon that was 200 meters thick. However, what makes the Kama Bay sill valuable to the SRU researchers is its small size, which means it cooled quickly and better data can be gathered to calculate the cooling history which took place about one billion years ago.

"We're taking samples every 10 centimeters to see how the crystal sizes change and how the chemical composition of the entire rock changes," Zieg said. "This, in turn, tells us the cooling history, and indirectly this would tell us how deep this sill was placed. The nice thing about this sill is that it's so thin that the crystals grew and solidified and froze really fast. It's an idealized situation where we can make a tight relationship between the aging process and the observed rocks and apply that relationship to other systems that are not as simple."

McIntyre is capturing 16 images of each sample to measure the crystals and log them into imaging software and compiling the data in spreadsheets. She's getting paid to work 30 hours per week this summer thanks to nearly $5,000 in funding from SRU's Summer Collaborative Research Experience grant program. McIntyre also travels to IUP to use a scanning electron microscope that captures more details, up to a nanometer scale, that reflected light images used in previous sample analysis could not accurately depict. Zieg is a co-principal investigator on a $425,829 National Science Foundation grant that last year awarded the SEM to a research lab at IUP. The principal investigator on the grant is Nick Deardorff, IUP associate professor of geoscience.

"Undergraduates almost never get the opportunity to work with such sophisticated technology," McIntyre said. "I get to learn all these (different tools that) I can put on my resume. These are all things that I wouldn't have learned in the classroom. This is my first experience with real research and actually seeing what geology could look like for me after I graduate. It's really cool."

McIntyre started at SRU as a communication major and followed her interest in volcanoes to switch majors. She hasn't decided what she'd like to do after graduation but, now that she's gaining research experience, graduate school is a favorable option.