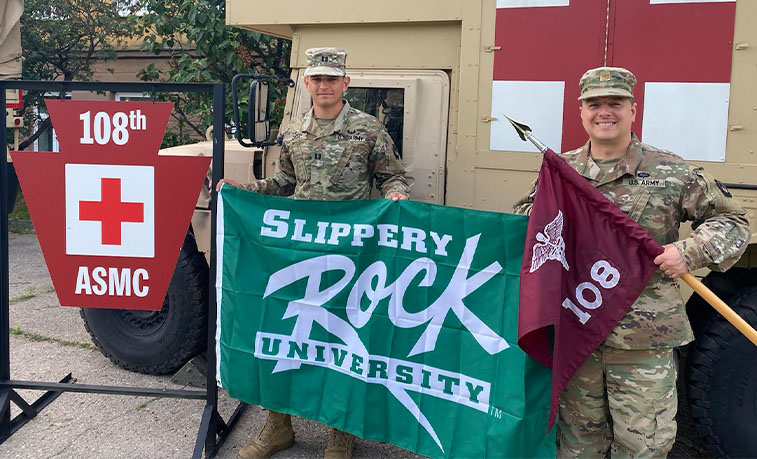 SLIPPERY ROCK, Pa. — Maj. Christopher Brown admits he took "the long way" in his military career. He did his basic training when he was a junior in high school and signed a contract to become a U.S. Army ROTC cadet at Slippery Rock University just weeks before 9/11. But now, more than 20 years after his split entry into the Army, he's completing his first deployment with a rather unique distinction: Brown is the first military physical therapist stationed at his base in Poland.

"It has been an interesting experience for sure and I've had the opportunity to help out a lot of other soldiers," Brown said. "I enjoy it a lot. Having been in the military for a number of years, it's nice to be able to take care of my own (soldiers)."

Brown earned a bachelor's degree in exercise science from SRU in 2004 and, although commissioning as an officer through ROTC, he delayed his military service while completing his doctoral degree at SRU in physical therapy, which he earned in 2008. He then attended his Basic Officer Leader Course, was assigned briefly to the Medical Service Corps and once he became a licensed PT he entered the Medical Specialist Corps.

"Some units have them whenever they are deployed or they will 'borrow' them from the military hospitals," Brown said. "But active-duty military has a lot more than the National Guard."

As a National Guard member, Brown commits his one weekend a month and 2-3 weeks of training military each year while working full-time as a physical therapist at Sharon Regional Hospital near his hometown of West Middlesex. In March 2021, however, Brown was deployed, along with nearly 80 other soldiers, with the 108th Area Support Medical Company, 213th Regional Support Group, to partner with NATO allies in Poland, the Baltic Region and Germany, to support forces of the European Deterrence Initiative.

Among them was Shane Duda, a 2013 SRU graduate with a degree in biology, who is a military physician assistant also on his first deployment from the 128th BSB.

Brown and Duda were assigned to a base in Powdiz, Poland, where they are covering U.S. soldiers from six countries east of Germany either by visits at the clinic, telemedicine visits or traveling between bases. Although there is no combat, NATO member countries are conducting military exercises in Poland and Lithuania aiming to defend the area from potential activity from Russia.

In his civilian work environment, Duda is an emergency room physician assistant, and his role in Poland is similar in that he assesses soldiers' injuries and sicknesses before referring them elsewhere, including for emergency surgeries.

Brown, meanwhile, was tasked with ordering equipment and setting up a physical therapy clinic using an empty room, all while word got out across the U.S. European Command that a PT was arriving. He had 15 soldiers show up for treatment on the first day.

"It has been challenging and the first few weeks were pretty crazy," Brown said. "It took a while to get everything straightened out and filter through the ones who actually needed therapy."

Brown sees a lot more musculoskeletal injuries than he does when treating civilians, who are less likely to be jumping out of military-grade vehicles, but he also treats overuse injuries from excessive training.

"The big difference (between civilian and military PT) is that it's hard to get (civilian) patients to do their exercise program at home on their own, and here I have to say stop lifting weights or running and let everything heal," Brown said. "Military (soldiers are) motivated to get better as quick as they can so they can get back to doing what they need to do."

Brown will complete his six-month deployment in early August, when his replacement is assigned. At that time, he'll return home to his wife and three children. His wife, Christine, '06, '09M, is also an SRU graduate with degrees in elementary education and school counseling.

Brown said he's thankful for his experience at SRU and is proud that he and Duda are representing The Rock abroad.

"(SRU) helped me a lot and had I not gone to ROTC, I would not have ended up in this position," Brown said. "My intention was not necessarily to even become an officer in the military, but opportunities presented themselves at just the right times and I took advantage of them.

To learn more about the Doctor of Physical Therapy program at SRU, visit the program's webpage.