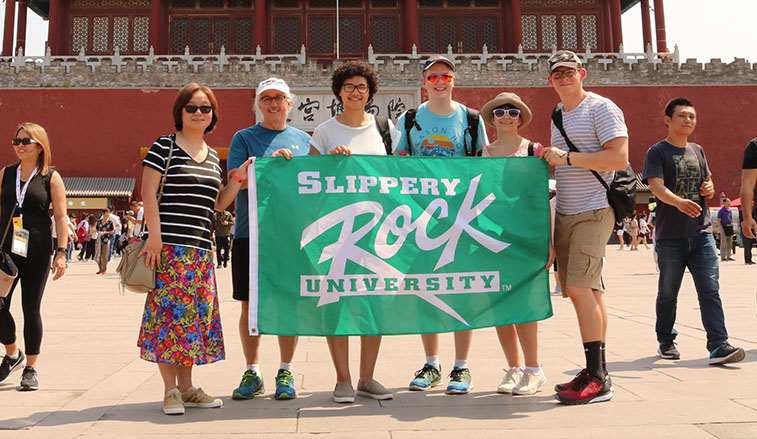 From left, Slippery Rock University professors Li Pu and John Golden; and SRU students Aisha Aldubayan, Thomas Fabian, Marlee Theil and Marshall Tuten stand in front of the Forbidden City palace in Beijing. The research group traveled to China, May 16 to June 6, through the ASIANetwork’s Student-Faculty Fellows Program to conduct a sustainability study about the nation’s rapid modernization initiatives.

SLIPPERY ROCK, Pa. - The effects of modernization on the opposite side of the world may seem like an issue with little consequence to Americans, but it matters to a faculty-student research team at Slippery Rock University.

Two SRU professors and four students took questionnaires and video cameras to Southwest China, May 16 to June 6, to conduct a sustainability study that will benchmark outcomes from rapid modernization initiatives in that country by accounting for economic, environmental and social influences. In particular, the researchers had questions for members of ethnic groups in two small villages affected by the movement of jobs, resources and their people to urban areas.

"As China rapidly modernizes and builds up its infrastructure, what effect does this have on the villagers?" said John Golden, assistant professor of business. "We want to know the effect modernization has on their education, income, health and natural resources. Is it a good thing or a bad thing? We didn't know whether the push for modernization would be perceived as a threat to their culture."

Golden and Li Pu, associate professor of communication, received a $29,000 grant from the ASIANetwork's Student-Faculty Fellows Program to conduct the research. SRU is one of only 10 institutions to receive an SFF grant this year. ASIANetwork is a group of more than 170 North American colleges, which strives to encourage the study of Asian countries and cultures, enable students and faculty to experience those cultures first hand and foster collaboration among institutions.

Pu served as the group's translator as they entered two villages near Pu's native city of Chongqing. With a population of more than 30 million, Chongqing is considered the largest city in the world based on the land area of its municipality, which is nearly 32,000 square miles. By way of comparison, Chongqing has a population greater than the state of Texas living in an area the size of South Carolina.

"The rural villages are going away, not only in China but in developing countries; it's a very common problem," Pu said. "Because they are losing a lot of young people, who are moving to large cities for better education or more job opportunities, the culture in that specific area is endangered."

The SRU research team focused on ethnic groups in two villages, the Gelao community in the Wulong District and the Miao people in Pengshui County. They interviewed and surveyed more than 50 villagers.

"My concern is, who is going to carry out the culture?" said Pu, noting the ethnic groups' clothing, music, dance, holiday celebrations and architecture. "If people (who leave for cities) don't want to come back because of the living conditions, and once the older people die, no one is going to continue their heritage."

In addition to a government-sponsored campaign to end poverty by the year 2020, tourism for the rural areas has been developed as a remedy, particularly for people living in the mountainous areas who cannot rely on agriculture. Although they have yet to complete their research and analyze the data, Golden and Pu said that anecdotally, the villagers are receptive to tourism and the resulting improvements to infrastructure to support it.

"We got some different results but we were a little surprised to find that they actually like the idea of tourism because of the economy," Golden said. "As they continue to raise their children, the hope is that they would not have to leave, that maybe they have a better chance for health care and better education. It's an interesting dynamic. Sometimes these changes take place over 100 years or so, but this is rapidly changing."

Golden hopes the research could help serve as a model for programs responsible for getting families above the poverty line.

"Some people benefit but (these improvements) aren't always better for everybody," said Aldubayan, who along with Fabian, are creating a 15-minute video documentary about the program. "Our goal was to film everything and fully embrace ourselves in the culture. We just want to raise awareness of the differences between the village and city life and the modernization of China and how it affects people."

The research findings, as well as the documentary, will be presented at the next ASIANetwork Conference, April 12-14, 2019, in San Diego. Aldubayan and Fabian will also attend the Clinton Foundation's 2018 Clinton Global Initiative University meeting, Oct. 19-21 in Chicago, which is regularly attended by more than 1,000 student leaders each year to address societal and global challenges.

In addition to conducting research in China, the SRU team visited with representatives from Chinese universities and companies, including Chongqing Technology and Business University; Southwest University of Political Science and Law; and Baiya Corporation, where each party learned more about the other nation's management styles and marketing practices and discussed opportunities for future partnership.

"(China) is a very important country to the United States, politically and economically," Pu said. "I really hope (SRU students and faculty) can come to my country and learn about the people and the culture, and more students can be more exposed to a diverse culture and appreciate the difference of the culture."

Even with some obvious differences, Aldubayan was able to appreciate the similarities as well.

"You come in with this assumption that China is so different," said Aldubayan, who said by spending time in the villages she took for granted things like clean air, clean water and ethnic diversity. "But it's actually very similar to America in terms of the city life that's blooming and you have people constantly moving. It's very much like city life in America and we have places like the villages too that aren't talked about and not shown in the media. That's what was amazing to me - how similar we actually are."