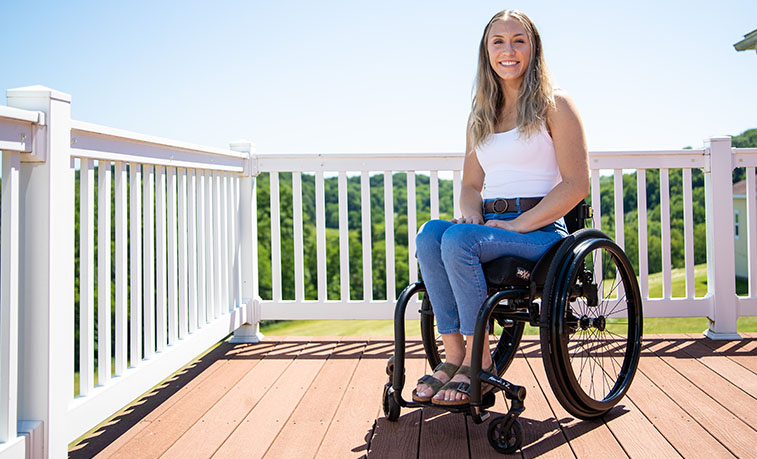 Roxanne Dunn, a 2020 Slippery Rock University graduate and former pole vaulter, is regaining her ability to walk with assistance of Lofstrand crutches at home in Dover, Ohio, following a 2021 car accident.

SLIPPERY ROCK, Pa. — Pole vaulting requires instinct. Sure, athletes must concentrate on their steps and body placement to run with a 15-foot pole and clear a horizontal bar suspended 12 feet in the air. But to compete at the collegiate level, it's all about trusting yourself, both physically and psychologically.

Roxanne Dunn had the instincts, the training and the technique. When she first came to Slippery Rock University as a transfer student in 2017, she already had years of pole-vaulting experience coupled with a background in gymnastics. That all changed on March 21, 2021.

Now, nearly two years after she graduated from SRU, she's regaining trust in a body that can no longer pole vault, run, jump, or even walk like it did before.

"I'm learning something you learn as a baby and I'm learning it at the age of 25," said Dunn, a 2020 SRU graduate with a degree early childhood and special education. "Everything I do now is a step-by-step process and how I move from point A to point B. It is a ton of body awareness and self-trust so I can catch myself if I start to fall. It's like learning how to pole vault. I have to think about every muscle. I need to know where to place my feet, how to hold the walker, how to pick this leg up and what do with my left leg while I'm moving my right leg."

The Day Everything Changed
Dunn will never resume walking as she could before, and her progress toward greater mobility requires months of physical therapy. But Dunn is now walking during her therapy sessions with the assistance of Lofstrand crutches that attach to her forearms, near where she has a tattoo of the date March 21, 2021. That's when she was the passenger in a Honda CRV that veered off a road in Butler County, hitting a tree stump and down an embankment. 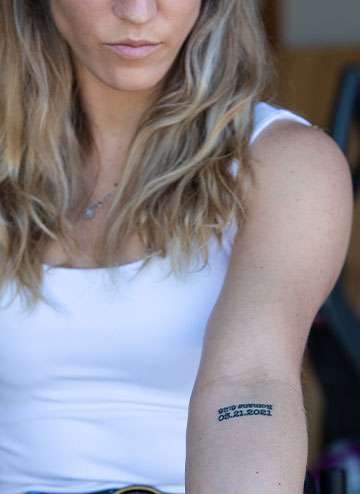 Dunn was flown to UPMC Presbyterian Hospital in Pittsburgh after the crash. In addition to a spinal cord injury, Dunn had severed intestines and a smashed orbital socket. She had four surgeries, three within 48 hours following the accident, along with a 53-day hospital stay in the intensive care, neurological and inpatient rehabilitation units. She spent three days on a ventilator and complications with the feeding tube that she used while hospitalized resulted in her relying on IVs and losing more than 30 pounds from already her lithe, athletic build.

She had to come to terms that she was paralyzed from the waist down and would possibly never walk again.

"In my brain, I heard 'paralyzed' and I knew the ramifications (of that)," Dunn said. "But it wasn't until someone sat me down weeks later and said that I'm going home in a wheelchair that I understood the severity of what I was dealing with. My therapist said, 'I'm not saying you'll never walk again, but you won't walk out of here. It might happen, but it's not going to happen here.'"

Walking, according to Dunn, is up for interpretation.

"Functionally, I can't walk, but to say that I'm not walking would be a slap in the face to people who will never walk again," Dunn said. "I can use a walker, I can use crutches, and I'm capable of walking in some capacity. I was told I'd never walk again, so in comparison to that, I can walk, but I can't go to the grocery store on my own or function in the community yet."

Recovery from a spinal cord injury isn't a linear process. Simply walking, in any form, is a huge accomplishment yet many challenges still lie ahead. But to really understand where she's been and what's still to come, you have to know Dunn before the accident.

A History of Perseverance
Bill Jordan recruited Dunn when she was in high school and coached her two years at SRU. During the pandemic when Jordan and his wife needed childcare for their two daughters, Dunn was his family's babysitter.

"She always wanted to do whatever she was doing really well," said Jordan, a former SRU assistant track and field coach who is now The Rock's head coach. "She has a lot of perseverance and dedication and when she decides to do something, she puts her mind to it and she's not going to give up. Those are the things that made her a really good athlete, educator and a babysitter for us, and right now with her learning to walk again, a lot of people out there might have thrown in the towel and said, 'Hey, it's just too hard; I'll just be in a wheelchair the rest of my life.' She's not the type who will give up."

"Yes, I have motivation and I want to do everything I can, but I'm able to do it because of the type of injury that I have," said Dunn, who was first diagnosed with an incomplete tear of her T12-L1 spinal cord. "For someone with a complete injury, they could have more motivation than I do, but they're not going to walk. When you have a spinal cord injury, the time of recovery is different for everybody, but typically it falls in this two-year window where you see the most recovery."

Since she returned home from the hospital, Dunn's parents, Ryan and Marlene Dunn, drive her more than two hours both ways to Columbus, 2-3 days a week for physical therapy, occupational therapy, and for other specialized care not available near her home in Dover, Ohio.

Becoming an Advocate
She's used her Instagram ( @nicole.roxanne_) and TikTok ( @nicole.rox), to talk about her journey and educate people about different types of spinal cord injuries. She candidly shares stories of what people must endure and what it takes to function in her daily life. Dunn said being open about her recovery has been therapeutic for her to track her progress.

"The toughest part, undoubtably, is what I go through that people don't get to see," Dunn said. "They'll see me making progress walking and say, 'You're doing great,' or they'll see me out with my friends. But I'm not always positive. I have bad days. It's insane for anyone to expect to be a certain way all the time. I go through a lot of things that people don't understand, and I want to be someone who people can feel comfortable asking questions. My biggest goal is to create a place to learn from the actual person."

New Goals, New Challenges
It's no surprise Dunn aspires to become a teacher. Prior to her accident, Dunn worked with children at the Akron Rotary Camp, where many campers have developmental or physical disabilities. She's since resumed working with children at the camp this summer, but she has also interviewed for teaching positions in school districts near her home.

At the time of her accident, Dunn had just received her license to teach general education and special education in Pennsylvania, and during her recovery she earned one of two certifications in Ohio. Supporting students with special needs is already a challenging job. Doing it with special needs yourself presents another set of challenges.

"There are a lot more considerations for my safety and the safety of the students, but I haven't given up on that dream," Dunn said. "My goal is to do what's best for my students and I don't know if that would be me teaching. If I don't get a job working in special education, that doesn't end my drive working with children with special needs. I think I'll find a different way to do that." 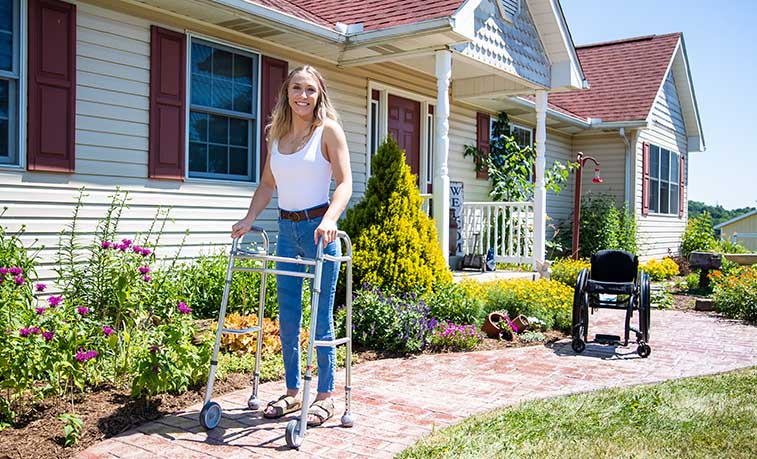 It Takes a Community
"There's been a lot of time and energy put in by many people who have helped me, but it's been worth it," said Dunn. She acknowledged her family, including her parents, her brother, Kyle, her best friend, Nnemelie Uzo-Diribe, and her therapists for helping her during her recovery.

"Some of the most supportive people after the accident were from Slippery Rock," said Dunn, mentioning how many SRU community members contributed to a GoFundMe account that was started on her behalf. "It wasn't the things that I did at Slippery Rock but the relationships that I cultivated while I was there that I still have to this day."

To Dunn, recovery is not like pole-vaulting, where the fight is won by clearing a bar at a fixed distance. It's more of a state of being and action.

"Recovery is more about reintegrating myself back into the community and having a normal life," Dunn said. "But this isn't something that anyone can do for me. This is a fight that I have to do for myself.

"Recovery is about moving forward and not focusing on whether I can walk without a walker. I'm still doing that, and I still hope for that, but the biggest move would be to become a just another 25-year-old, with a career and a life beyond the accident."