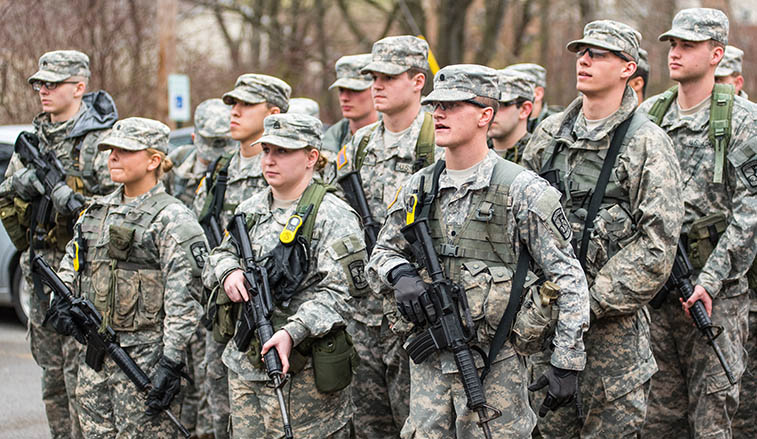 According to Lt. Col. Joseph Richey, Slippery Rock University professor of military science, two different training events are conducted at Fort Knox each summer: basic training and advanced training camps. Basic camp is designed for lateral entry cadets or cadets who were late to join an ROTC program. Richey said this level of training teaches cadets basic military initial entry skills and prepares them for entry into the level 300 military science courses without having to complete the 100 and 200 level courses.

Advanced camp is a legally-mandated commissioning requirement, and passing the advanced camp is a requirement for graduation from an ROTC program. Cadets traditionally attend the advanced training camp between their junior and senior years, during which they are evaluated on the Army Leadership Requirements Model which assesses army attributes and competencies. While at Fort Knox, they are placed into leadership positions and evaluated by an experienced ROTC cadre from across Cadet Command, Richey said.

"The cadets also have to navigate through the additional challenge of peer leadership as they rotate leadership positions and working as leads," said Richey. He and SRU's other professors of military science make up the cadre at Fort Knox.

"Being part of this group really gives us an appreciation for the cadets and what they accomplish as they make their way through training because we see it firsthand," he said. "It can be grueling and rigorous, and the students often struggle with that, but they are unyielding in their commitment and effort to learn and develop.

"From a cadre perspective, it's truly inspiring to teach and serve with them."

Richey said that each cadet leaves Fort Knox with a different and personal story. "One cadet said she was happy to have learned about relationship skills, forming a hardworking team out of strangers and providing the leadership necessary to accomplish a task. Another cadet remarked that she learned more effective teaching methodologies that she will take back to campus and implement within her academic program."

Aside from the camp at Fort Knox, cadets from SRU and Clarion University were assigned to attend various training and educational experiences around the globe this summer including internships in Florida, Illinois and Maryland; and foreign travel to Morocco, Lithuania and Peru for the Army's Cultural Understanding Leadership Program..