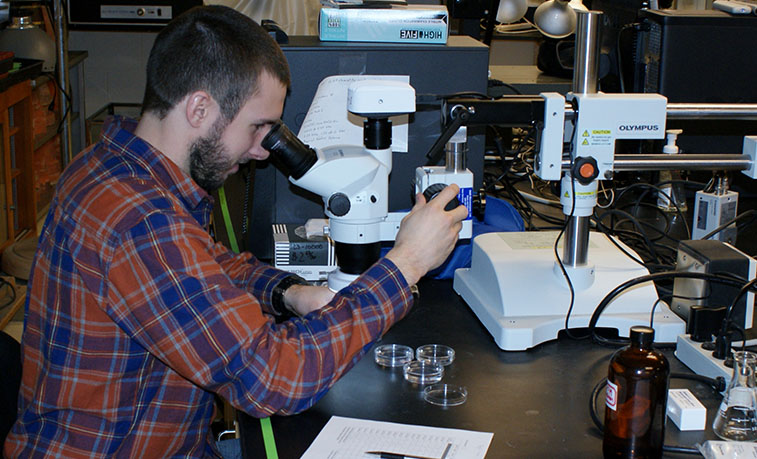 Brian Merritt, a 2016 Slippery Rock University graduate, researched flatworm regeneration with Simon Beeching, professor of biology, when he was a student at SRU. Merritt and Beeching co-authored a recently published article documenting their findings.

SLIPPERY ROCK, Pa. — The early bird may catch the worm, but when Brian Merritt was a student researcher at Slippery Rock University he woke up early to do more than just catch worms: he cut their heads off and over time watched their heads grow bodies and their bodies grow heads.

"It sounds morbid but, yeah, that's what we were doing, so we were really creating two worms," said Merritt, a 2016 SRU graduate with a degree in biology. "Flatworms regenerate and we were watching how different variables affect their regeneration."

Merritt, who is currently a third-year medical school student at Lake Erie College of Osteopathic Medicine, recently had his research published in the international journal, Marine and Freshwater Behaviour and Physiology. Simon Beeching, SRU professor of biology, co-authored the paper. Their article, titled "Dose-dependent disruptive effects of melatonin, light and temperature on regeneration in the planarian Phagocata gracilis," included findings from research that Merritt conducted as an SRU student using planaria, or flatworms.

During trials involving as many 54 flatworms, Merritt would enter the laboratory at 7 a.m. each day and analyze the stages of the worms' regeneration for two hours. He followed protocols developed by Beeching to treat the decapitated flatworms with large dosages of melatonin, a hormone found in plants and animals, including flatworms, that is most commonly associated with sleep. Merritt also tested flatworms in water, as a control, and against other variables such as 24 hours of light, 24 hours of darkness or a 50-50 split of light and darkness.

"Flatworms are amazing when it comes to regeneration; this has been known for a long time," Beeching said. "We also know melatonin is powerful stuff. Our hypothesis was that larger, pharmacological doses of melatonin would act as a disruptor of regeneration."

So it came as no surprise when after an entire week of work, half the time for a flatworm to completely regenerate, Merritt reported to Beeching that all worms treated in melatonin were dead.

"I said, 'OK, good; now do it again with half the melatonin,' and he turns around and walks out of my office and does it," Beeching said. "Some students might not want to work that hard but it didn't faze him."

"I learned a lot about the research process and I've grown to appreciate the time and effort that goes into these projects and the faculty who are involved in research day in and day out," said Merritt, whose experience helped him conduct further research during a medical-school internship that was also published. "SRU is very research-oriented, which is great, and it provides a great opportunity for students in all kinds of academic fields. This experience welcomed me into the whole realm of biology as a career."

After three trials, Beeching and Merritt found that high levels of external melatonin generally inhibited the regeneration process, with nonlethal dosages resulting in delayed regeneration and other irregularities. Their research also showed a presence of light did not have an effect on the regenerative process.

"The students are unhappy with our conclusions because they know everything makes melatonin, (and they wonder) how can it be bad," Beeching said. "But it's like caffeine or sugar; it can be good depending on the dosage and when are you taking it. I suspect it is really good, but really high doses disrupt regeneration and we can learn a lot about regeneration and melatonin but studying this."

Regeneration is being closely studied by scientists because of its potential benefits to the medical community for use in stem-cell therapy. Stem cells are cells that can become almost any type of cell in the human body and serve as a repair system. For example, a surgeon might use a patient's own stem cells to grow a new liver instead of waiting to perform a transplant.

"Flatworms are one-third stem cells, so people are studying them really seriously now because of the potential medical applications," Beeching said. "Regenerative medicine is the future and (doctors) are already doing it. (The research of flatworms) is tangentially related to (stem-cell therapy) and the reason why these worms are being studied more is that they can teach us about regeneration and that is likely a big part of the future of medicine."

There are many species of flatworms. Beeching said the species he gathered from the streams at SRU, Phagocata gracilis, are found throughout the Great Lakes region but no one has published research related to their regenerative properties for decades. Beeching also said melatonin research has intensified in recent years, with researchers connecting it to treating brain injuries and damaged muscles.

"But some studies say melatonin helps and some show that it hurts," Beeching said. "It's a great time to study melatonin because a lot of people are interested in it and there's still a lot that's unknown. It gets more interesting in humans because circulating levels of melatonin doesn't tell the whole story because there are places in your body that have higher levels than others.

"This is just the beginning of what we can learn about melatonin, right here in this department, let alone the rest of the world."