SRU researchers study effects of inclusive and exclusive pronoun use 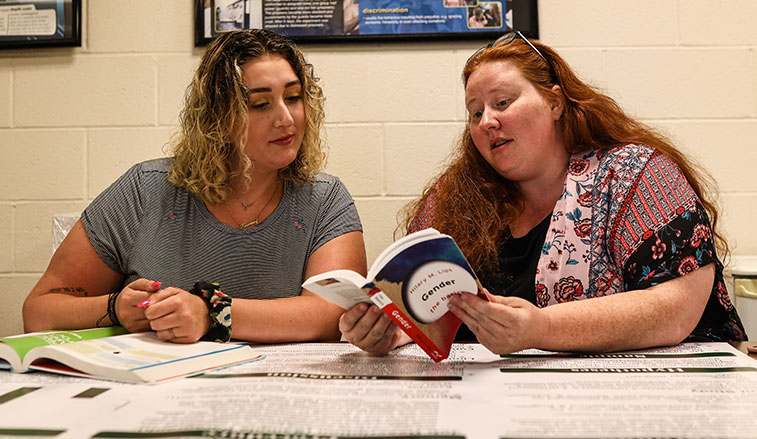 From left, Kourtney Kotvas, a senior dual psychology and interdisciplinary programs major, and Emily Keener, Slippery Rock University assistant professor of psychology, are part of a research team at SRU that is studying the effects of inclusive and exclusive pronoun usage.

SLIPPERY ROCK, Pa. — Pronoun usage can be tricky, especially when a person's gender is unknown or a hypothetical person is referenced, like in a job description. Should "he" be used as a generic pronoun or should the author use "he/she"? Can "they" be used as a singular pronoun even though the word is most often used as a plural pronoun? Researchers at Slippery Rock University are studying the effects of gender inclusive and exclusive pronoun use to help answer those questions.

"Words matter," said Emily Keener, SRU assistant professor of psychology. "People once used 'he' generically but that's gone away because of a body of research (that took place) years ago that showed 'he' doesn't function generically as intended. The language changed and the norms changed."

Keener said that the generic "he" should not be used because of what is called a self-reference effect, where information is processed more effectively if it applies to someone.

"The theory is that when women see or hear 'he,' they aren't saying to themselves, 'Well, that applies to me,'" Keener said. "Then they won't pay special attention to (the message) and think about how it connects to what they already know or remember it for future use."

Keener is leading an ongoing research project with SRU psychology majors, who, this summer, include Kourtney Kotvas, a senior dual psychology and interdisciplinary programs major from Pittsburgh. Keener and Kotvas received $5,000 in funding from SRU's Summer Collaborative Research Experience grant program to conduct the research.

Last year they collected more than 400 survey responses from SRU students who read one of four on-campus job descriptions. The students then had the access to the job description removed before taking a 20-minute survey asking questions based on their memory and interpretation of the content. There were four conditions for the job descriptions using:

"We frame it as a focus group," Keener said. "Whenever we pass out the advertisement, the participants don't know that they are getting different versions and that they are randomly assigned. They are also not told their memory is going to be tested."

The preliminary results indicated that memory scores for men were higher than women when the exclusive "he" pronouns were used, and women had higher scores than men for the "he/she" condition.

"You'd think the scores would be equal (for the "he/she" condition), but it's more information to process than just one pronoun overall," Keener said. "And the women have a better memory because they are included and you see a little bit of the self-reference effect."

To address a self-reference effect for the inclusive pronouns, the next part of the research is to survey participants who are non-binary, that is, they don't identify exclusively with either gender. To reach that population, Keener and Kotvas are using part of the SCORE grant to use Amazon Mechanical Turk, a service where survey participants are paid to complete online surveys. The goal is to get at least 120 responses from non-binary participants.

Keener hopes that the research will better inform the public, especially editors of style guides, which direct writers on proper word usage.

"People are left out in a systematic way when gender exclusive pronouns are used," Keener said. "We need to get beyond the grammar, which can evolve and (begin to) use 'they'/'them' as singular pronouns."

Keener and Kotvas presented their preliminary findings at the Association for Women in Psychology's national conference in Newport, Rhode Island, last March, along with Shawna Skoczynski, a 2019 graduate with a degree in psychology, and Celeste Tevis, a volunteer research assistant from Grove City College.

Through the SCORE grant, Kotvas also is getting paid to work this summer in the lab to expand the research and analyze data using Qualtrics software.

"This has been a really good opportunity," said Kotvas, who has volunteered for the project the last two years. "I've presented at conferences, had extensive lab experience, been able to ask more questions, met a lot of people and learned the different online survey platforms."

Kotvas came to SRU wanting to be a counselor but having delved into research, she is interested in going to graduate school and becoming a psychology professor.

"She was already a leader in the lab but having this experience over the summer she'll be even more of a leader when other students start working on this project in the fall," Keener said. "That will influence her application to graduate school and further develop her as being part of a team."