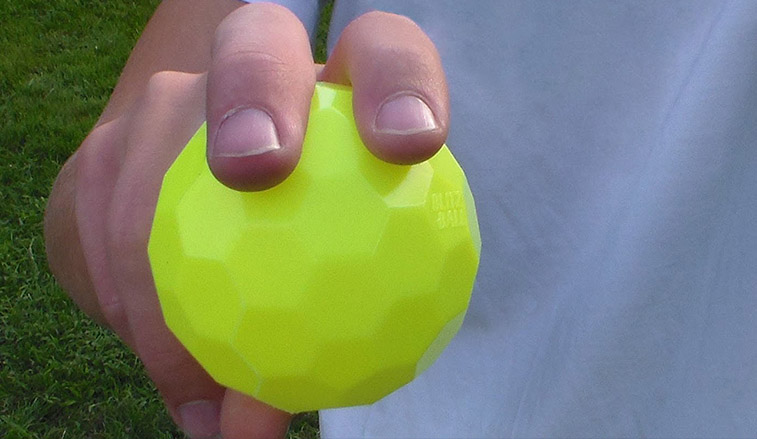 Blitzball will be introduced as an intramural sport at Slippery Rock University next spring in place of whiffle ball, which was invented 65 years ago.

SLIPPERY ROCK, Pa. - Whiffle ball, a perennial backyard favorite, was born Aug. 14, 1953, and like many 65-year olds, is heading into retirement - at least at Slippery Rock University. A new game, Blitzball, which puts a spin on the old game will be introduced next spring as one of the 24 intramural sports offered at SRU's Aebersold Student Recreation Center.

The game of whiffle ball, which includes a bat and ball made of light-weight plastic, was invented to take the place of baseball or softball because it could be played in more confined places like backyards or indoors. The whiffle ball has perforated holes so it will curve easily when thrown and not travel as far when solidly batted.

The plastic Blitzball is similar to a whiffle ball but does not have holes. Instead, the Blitzball features flat hexagon-shaped panels for grip. Compared to the whiffle ball, the Blitzball provides greater speed and curving action when thrown and travels farther distances when struck.

"When I was young we played a ton of whiffle ball in our backyard," said Matt Lobaugh, SRU assistant director for recreational sports. "We were thinking about sports to add and people talked about whiffle ball a few times, but Blitzball is trending right now. Also, softball seems to be growing, so we're hoping people say, 'Hey, we played softball; let's bring our team to Blitzball."

Softball is an outdoor intramural sport played in the early fall, while Blitzball will be played indoors at the ARC beginning Feb. 3.

Max Meyer, a senior sport management major from Suwanee, Georgia, played on one of the 28 intramural softball teams last fall and thinks people will be interested in trying Blitzball. As a former baseball player who grew up playing whiffle ball in his backyard, Meyer appreciates the simplicity of plastic bat-and-ball games.

"We'd get a bunch of our friends together and have a whiffle ball home run derby or play a game for an hour or two in a cul-de-sac; it was a lot of fun," Meyer said. "It's cheap, too; all you need is a plastic ball and a plastic bat and maybe a couple trees for bases."

Whiffle ball was invented by David Mullany in Fairfield, Connecticut, for his 12-year-old son to play. In his neighborhood the kids referred to strikeouts as "whiffs," thus naming the ball. Mullany later had his invention trademarked as "Whiffle Ball," and went on to see it not only gain tremendous popularity but eventually earn a place in the National Toy Hall of Fame.

Whiffle ball has not been an intramural sport at SRU for at least five years. The types of sports fluctuate each year based on student demand, but according to Lobaugh, sports like basketball are the most consistent.

"It's interesting to see the dynamic within the culture and how interests change," said Lobaugh, who is entering his sixth year at SRU. "It's really just the students coming in and telling us their needs and wants."

In addition to Blitzball, disc golf will be a new intramural sport for 2018-19. Disc golf has gained popularity in recent years, especially with SRU having an on-campus course that hosted the world championships in 2015. Pickleball, which resembles tennis, is another recently added sport with a perforated plastic ball that has gained interest.

Last year more than 2,800 SRU students participated in at least one intramural sport, ranging from outdoor sports like soccer and flag football to indoor sports like floor hockey, volleyball and wheelchair basketball.

For more information on intramural sports at SRU, visit www.imleagues.com/sru or call 724.738.4800.