Elise Michaux, a Slippery Rock University graduate, is in her second year serving on SRU’s council of trustees.

SLIPPERY ROCK, Pa. — For someone who once thought enrolling at Slippery Rock University seemed out of reach, Elise Michaux sure has a firm grasp of the college experience. She's not only a distinguished graduate who works in higher education, she's a member of SRU's council of trustees. According to Michaux, she's simply reciprocating the trust that SRU put in her when she was a student by faithfully serving the University as a member of the council.

"I did not think I was going to go to college," said Michaux, '11, '13M, who earned a bachelor's degree at SRU in English literature and master's in student affairs in higher education. "And, so, when I was accepted and SRU took a chance on me, I felt forever indebted. To serve in this capacity as a trustee, to continue helping to improve the University and being a part of the great things that we're doing is humbling and an honor."

That's why, to Michaux, her role as a trustee is much more than attending quarterly meetings.

"It's about providing amazing experiences for students," said Michaux, who joined the COT in 2020. "That's what we want them talking about when they go home or they are off campus on semester break, so that even more people will want to experience The Rock."

Michaux is still talking about her amazing experiences as well. She served as the Slippery Rock Student Government Association speaker of the senate, a FYRST seminar peer leader, vice president of the graduate student association, master of ceremonies for Up 'til 2 - a benefit for St. Jude Children's Research Hospital - and she advised the Chosen Generation Gospel Choir, to name a few.

"I learned about leadership and keeping a positive mindset at SRU," Michaux said. "It's important to me to give back to the students that came after me." 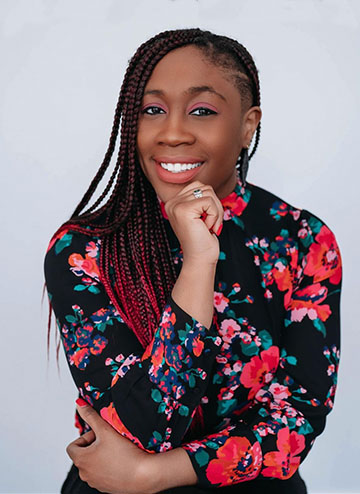 This doesn't mean she's on the trustees to provide alumni testimonials. In addition to being the vice chairperson of the council, Michaux feels called to represent all students, but particularly those with her identities as an African American woman who came from a community, Connellsville, with similar demographics to Butler County.

"For our Black students who are attending a predominantly white institution in an area like Slippery Rock, it can be very jarring," Michaux said. "I grew up in an all-white area, so I'm used to being the minority, but for many of the students who come here, it can be different for them. To have faces that look like mine (in a position of leadership), it speaks volumes, and it gives them something to reach for."

Michaux is the fourth African American to serve on SRU's council of trustees since 1988 and the first since Grace Hawkins and Eric Holmes were on the council in 2013.

"Part of advocacy is how we are thinking about the people who aren't at the table," Michaux said. "I can help do that. That's part of my job. No matter how busy I am, I'll participate on a search committee or participate any way I can in the life of our students, attending or speaking at an event. That's why I'm here."

A young, Black woman who is an SRU alumna is not the only perspective that Michaux provides. She also works in higher education. After graduating from SRU, she started her career as a counselor for special student populations at Robert Morris University, working with student-athletes and assisting them in creating their academic schedules, connecting them to appropriate academic support services and ensuring their overall well-being.

After two years at RMU, she became director of student involvement at Seton Hill University, where she expanded SHU's definition and understanding of involvement. Through a collaborative effort with faculty, staff and students, she helped roll out new leadership programming while supervising more than 60 student organizations.

In 2021, after six years at SHU, Michaux entered her current role as the founding director of enrollment management at Erie County Community College, where she is responsible for defining the strategic direction, long-range planning and implementation of the enrollment management functions, as well as developing and managing all aspects of the recruiting and retention strategies for students.

She's doing this all while working toward her doctoral degree at Gannon University in organizational learning and leadership.

"Working on a college campus myself, I get to bring students in and show them what is possible when they pursue a degree," Michaux said. "I wouldn't be in the career that I am in today if it weren't for having great experiences as an undergrad (at SRU)."

Beyond college campuses, Michaux is involved with community organizations. She is a consultant to the Reimagining Westmoreland's Inclusivity Committee and she manages outreach and promotions for the Fountain of Life Church in Pittsburgh.

Even before Michaux became a trustee, she was involved with SRU the community. In 2019, she was recognized by the SRU Alumni Association at its Annual Awards and Recognition Banquet for personal and professional achievements, and in January 2020 she returned to campus as part of SRU's Alumni Speaker Series.

These engagements eventually led to her being identified as a trustee candidate.

"I first met Elise when she was recognized at an alumni awards event, and I was struck by her personal insights about the value of an SRU education," said SRU President Bill Behre. "Now, having the opportunity to work together, I'm continually impressed by her thoughtful leadership, guidance and overall passion for helping SRU to continually improve. I am grateful for her insight. We are fortunate to have her voice as part of our council."

"I'm very grateful for SRU and to be around a table with people who care just as much as me is pretty amazing," Michaux added.