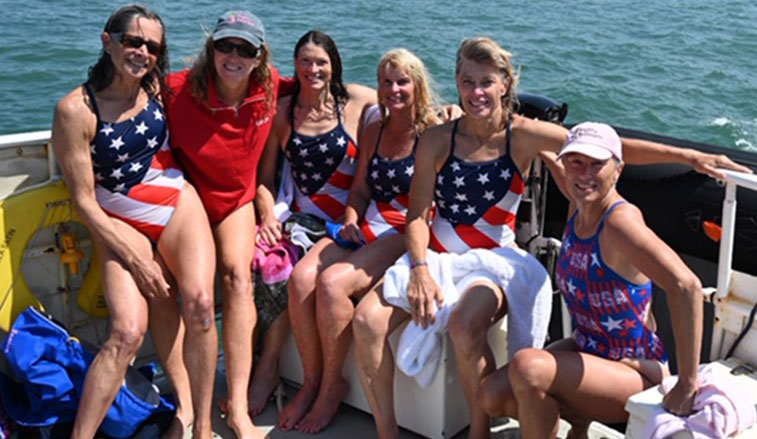 From left, Jenny Cook, Karen Einsidler, Veronica Hibben, Nancy Steadman, Christie Ciraulo and Tracy Grilli became the first relay team consisting of all women over the age of 60 to swim across the English Channel. Grilli is a Slippery Rock University graduate who anchored the last leg of the team’s 10-hour, 36-minute swim.

SLIPPERY ROCK, Pa. — What was Tracy Grilli thinking as she hastily swam toward the northern coast of France last month? Was she thinking about the two years of preparation ... the five other women depending on her ... her tender back that underwent double fusion surgery last year ... the water temperature (60 degrees) ... her age (she's 62)? Oh, and let's not forget the jellyfish. Or, how about accomplishing the ultimate open water swimming challenge: crossing the English Channel?

Luckily, she didn't land on a slippery rock but rather the stony beach at Cap Gris-Nez to complete the final leg for the only known relay team comprised of all women over the age of 60 to swim the English Channel.

"I kept peeking my head up to see how far I was and the beach was just not coming fast enough," Grilli said. "Knowing you are on a team with five other women, you just know you have to do it and you just go. I just kept swimming. When I saw the big rocks I said, 'OK, I'm getting close.' When I saw the beach I headed for it. When I reached the shore I put my hands up and all my teammates were coming toward me and we all high-fived and hugged. We all grabbed rocks for souvenirs and swam back to the boat."

Named the "Mighty Mermaids," the six-woman team consisting of Grilli, Nancy Steadman Martin, Jenny Cook, Karen Einsidler, Christie Ciraulo and Veronica Hibben finished the 30-plus mile swim in 10 hours, 36 minutes. Theirs was the third fastest of any relay attempt so far in 2019, with the fastest time belonging to a group comprised of seven men and women.

Since Matthew Webb became the first person to swim the English Channel in 1875, there have been nearly 4,000 channel swims consisting of 1,832 swimmers completing 2,369 solo swims, including Trent Grimsey's record time of 6 hours, 55 minutes in 2012. More than 7,700 swimmers have taken part in more than 1,000 relay swims. The average age of relay swimmers is 34 years, 299 days, and the average relay time is 12 hours, 45 minutes. 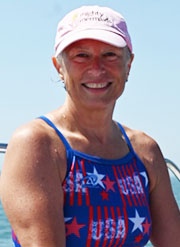 The Channel Swimming Association and the Channel Swimming & Piloting Federation are the two certifying bodies that organize or authenticate swimmers' attempts to swim across the English Channel. The distance from Dover, England, to Cap Gris-Nez, France, across the Dover Strait is about 21 miles but because of tides and currents swimmers typically swim an "S"-shaped path that could be up to 35 miles. There are several strict rules for authentication that swimmers must follow, including the restriction of any assistance, or swimsuits and equipment that aid endurance, buoyancy or heat retention.

Attempts are scheduled years in advance and swimmers must qualify with open water swims in similar conditions. For the Mighty Mermaids, the CSPF gave them an eight-day window, July 22-30, for them to make one attempt, which is relatively early in the channel swimming season because water temperatures are "warm" enough for swimmers, but still as cold as 57 degrees in late summer. Some registered swimmers never get the opportunity to attempt a channel swim because of choppy conditions, but the Mighty Mermaids had their chance at 2:07 a.m., July 23, with calm waters that were "like glass," Grilli said.

Einsidler dove into 58-degree waters from Samphire Hoe Beach near Dover under cover of darkness with a light stick tied to her back. The observer, captain and five other swimmers aboard the boat, "Sea Satin," followed her.

"We were hoping for 12 hours and that would mean each of us would swim twice," said Grilli, who explained that the rules for relay attempts are 60-minute intervals of constant swimming by each team member. "As we were swimming, and we were into our sixth swimmer, the captain said that we were halfway (through the route) and we could probably make it in 11 hours. We were feeling pretty good about ourselves."

That good feeling turned to pressure for Grilli. The first two swimmers on the relay, Einsidler and Steadman, are Californians with more open water training and had previously completed solo English Channel swims. Grilli's turn came up as the boat approached the destination. Because of the tide and that the landing spot was on a peninsula, there was a chance that if Grilli didn't swim fast enough the team would have to swim an additional hour. The sixth swimmer, Cook, who like Grilli had health challenges in the last year, struggled in her first hour.

"You have to hit that peninsula and if you miss it, then you are screwed," the captain, Paul Bowen, told Grilli. "You get in and you swim hard for 30 minutes and hopefully that will get you there. If you don't get there, then you're going to have to swim even harder because the tide will have changed."

"I lucked out and I got to land in France," Grilli said. "You're considered done when you climb out and onto the beach where the observer can see your feet. Fortunately for us, the pilot and the observer allowed all the girls to get in and they swam in behind me."

Grilli, who resides in Londonderry, New Hampshire, was invited to join the Mighty Mermaids 12 years ago when Ciraulo decided to assemble a team of 50-and-older open water swimmers to get together each year for a relays in places like Tampa Bay, Florida; the Catalina Channel, California; Red River, North Dakota; and even around Manhattan, New York.

Before graduating from SRU in 1979 with a degree in health and physical education, Grilli was a member of The Rock swim teams coached by the late Wilma Cavill and late Richard "Doc" Hunkler. Grilli said she was a more accomplished swimmer later in life after taking up open water swimming in 1983 and competing in age groups under U.S. Masters Swimming, the national, nonprofit membership organization for adult swimmers. Grilli worked full-time for Masters Swimming for 20 years before retiring in 2017, the year she posted the world's fastest time in the 1,500 meters for the 60-64 age group.

"Masters Swimming is a lot of fun and you meet so many people," said Grilli, who met her fellow Mighty Mermaids through Masters Swimming competitions. "I like to say every five years you get young again in your age groups. It gets tough at (age) 64 to compete against 60-year-olds but then the next year when you turn 65 you're a youngster. The great thing about swimming is as you get older there's so many things you can do with it including water polo and open water (swimming)."

The question now is what will Grilli and the Mighty Mermaids do for an encore?

"We'd been waiting for (the English Channel) for two years and now it's over," Grilli said. "We'll have to figure that out."