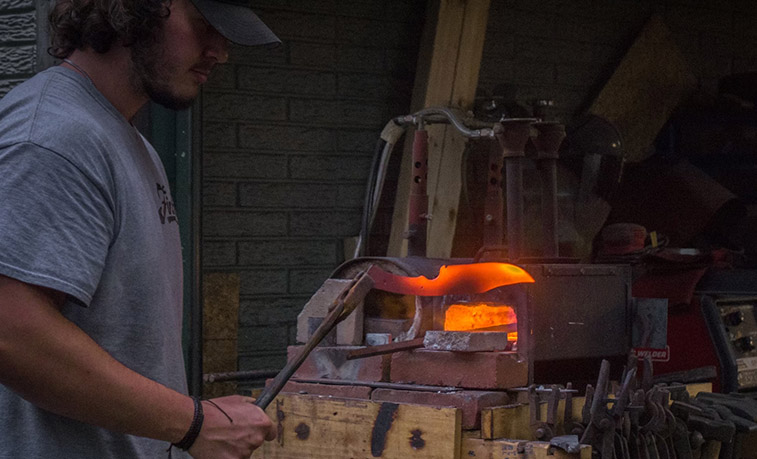 Eric Finch, a junior safety management major, will be one of the bladesmiths competing on an episode that will air at 9 p.m., Aug. 17, on the History Channel.

SLIPPERY ROCK, Pa. — Slippery Rock University students are often doing cutting-edge work in their field of study or disciplines, but one SRU student is getting attention on a national television show for taking the phrase literally. Eric Finch, a junior safety management major from Harmony and amateur bladesmith, will appear on an episode of "Forged in Fire," a reality show where contestants forge bladed weapons for the approval of a panel of judges and a cash prize. The show featuring Finch will air 9 p.m., Aug. 17, on the History Channel.

"Going to the studio, standing there behind my anvil and looking out at the three judges, it was like I was watching an episode through my eyes," said Finch, who traveled to Connecticut last fall to record the episode. "But it was actually me being there and competing. It was a very surreal feeling." 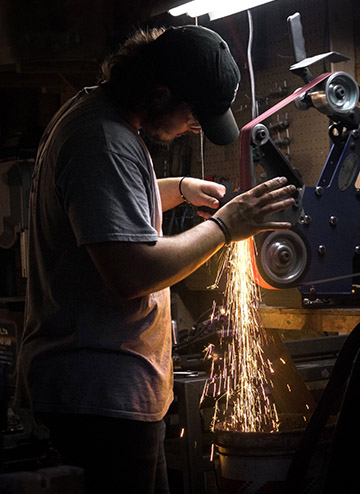 Finch became interested in forging in high school when he took a blacksmithing class at Lutherlyn, a camp in Prospect that provides activities through Lutheran Outdoor Ministries. He then took a welding shop class at Seneca Valley High School and decided to purchase his first coal forge and set it up in his family's garage.

"I got some other tools and I just got into it, making little bottle openers and hooks and then I started making things that were shaped like blades and went from there," Finch said. "I just completely jumped into it, and it's been my life for the last three years."

Finch began sharing video clips of his forging on social media through his TikTok account (@finchforfun). That's when a producer from "Forged in Fire" took notice of his skills. The producer emailed Finch to invite him to apply to be a contestant on the show.

Finch cannot share the outcome until the show airs, but each episode includes four smiths attempting to advance through three rounds to win $10,000. In the first round, the competitors are provided steel that they must use to forge a blade in a style of their choosing in an allotted time. Their blades are evaluated by the judges and one smith is eliminated. In the second round, the remaining smiths make their blades into functional weapons. The judges then cut through various objects to test each one for sharpness and durability. In the third round, the two remaining smiths are tasked with forging a weapon over the course of four days in their home forges before returning to the set for similar tests used in the second round.

"I've been fortunate enough to have parents who tolerate having a garage filled with dust and tools everywhere," said Finch, who displays his blades online and is starting to sell them at local shows. "After starting and learning to make random things, it's pretty cool now to be able to make my own style of blade."

Although forging has taken up a lot of Finch's time the last few years, he's also developing his career as a safety management professional. He recently completed a summer internship for a construction company in the Washington, D.C., area. This experience and his classes at SRU have given him a better appreciation for the proper safety precautions needed in a line of work that might seem unsafe.

"I learned a lot about what not to do," Finch said with a laugh. "But I like being able to connect what I do in the classroom to my shop. Oftentimes, my professors or friends will bring it up and ask me why I did something a certain way."