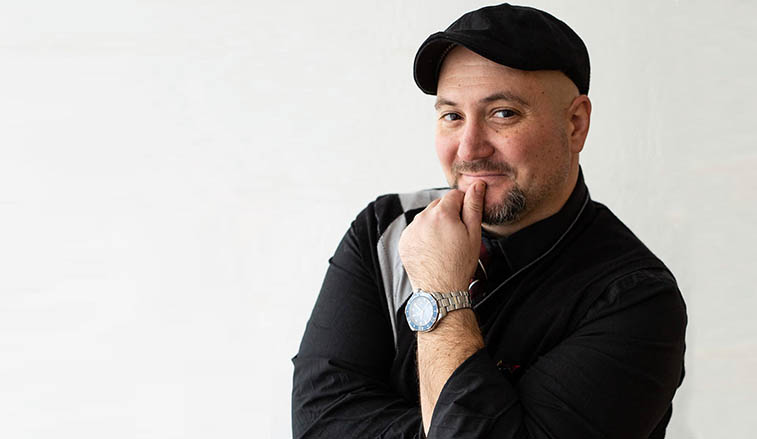 Pancho Timmons, a 2000 Slippery Rock University graduate, has co-authored the book “Quick and Easy World Change: Fixing Our Messed Up World One Small Act at a Time.” Timmons said he had a brief conversation with an SRU professor that proved to be a turning point in his career and life.

SLIPPERY ROCK, Pa. — The co-author of a new book with a bold title, "Quick and Easy World Change," experienced the biggest, most bold change in his world when he was a student at Slippery Rock University. Pancho Timmons, a 2000 SRU graduate with a degree in social work, is a social entrepreneur and business owner who has found success in both the for-profit and nonprofit sectors, but a discovery by one of his professors proved to be a turning point in his career and life.

"A five-minute conversation I had with a professor at SRU was the difference for me between flunking out of college and going on to get a master's degree, starting two companies and being where I am now," Timmons said. "If he didn't care enough to have that quick conversation, my life would have been completely different."

The professor was Robert Crafton, now an English faculty emeritus. The course was College Writing. And the year was 1997.

"It's my freshman year and I'm busting my butt, doing all the things you're supposed to do, going to class, studying hard and doing my best, but I was flunking out and not getting it done," said Timmons, who upon reflecting considered College Writing his most beneficial class despite his struggles. "I was turning in my last paper (for this class) and (Crafton) pulls me aside says, 'Pancho, we need to talk,' and I said, 'No, we don't. I get it. I don't belong here.'"

Crafton said it was quite the opposite and that he was an A- and B-student turning in C- and -D- work. Crafton detected that Timmons was dyslexic and recommended that he get help. Dyslexia, a learning disorder that makes it difficult for people to read, afflicts more than 20% of the population across all levels of intelligence.

Timmons wound up getting the help he needed. SRU provided support through its Writing Center and assistance, such as extended time for tests, from what is now SRU's Office of Disability Services. Timmons graduated from SRU and later earned a Master of Education in vocation rehabilitation counseling from Penn State. But he said he wasn't eager to share his battle to overcome dyslexia until he realized that his story could help inspire others.

"I adopted a lifestyle of kindness and helping people," Timmons said. "I firmly believe that if you do good things, good things will happen to you. That was the idea when I started my nonprofit, to help send kids into college and life a little more prepared than I was so they won't have that 'Oh, no' moment that I had and feeling like a failure when it's just an issue of getting the support they need."

After working for a government agency in vocational rehabilitation, Timmons founded the Pennsylvania Youth Initiative, now called The Inclusion Solution, in 2017. The nonprofit organization provides transition programming, such as career development and personal finance training, for youths with disabilities. Prior to the pandemic, the organization hosted a youth advocacy event in Pittsburgh that attracted more than 500 high school students.

In 2019, Timmons founded Connect in Effect, a for-profit organization that helps companies keep up with and be a part of the social-economic trends that directly impact the growth and development of their industry by using diversity and inclusion as a catalyst to improve and grow.

"(I help) teach companies how to really capitalize on diversity and why it's just more than a feel-good, happy thing," Timmons said. "This is what companies need to compete in business in 2021. When we look at Pittsburgh trying to be this budding tech hub, the biggest problem (the region has) is staffing. Companies are trying to compete with New York, Los Angeles and Boston. One of the reasons those cities are able to grow and be part of this tech industry, nationally and globally, is because they're able to use diversity to recruit and retain employment, and we're just not doing that here in Pittsburgh."

Timmons recently partnered with Sean Elliott Martin, an assistant professor of criminal justice and intelligence studies at Point Park University, to co-author a book, "Quick and Easy World Change: Fixing Our Messed Up World One Small Act at a Time." The book focuses on how acts of kindness and good deeds are not only a reward in themselves, but they also result in reciprocal goodness.

"The premise is that if you're not happy with your neighborhood or your work, there are little things you can do to make the world a better place," Timmons said. "The idea is really a paradigm shift in the way that people think they can improve their lives and the entire world around them. It's really not that hard: little things make a big difference, and in the book we give some examples of things you could do, as well as the 'why?'"

An example is how Timmons approaches networking events. Instead of asking people for help with his nonprofit organization, he approaches people to make connections to help them get what they need, and, in turn, he eventually finds himself on the receiving end with other people going out of their way to help him.

Timmons has often referenced that five-minute conversation with Crafton at SRU in 1997, particularly in recent interviews while promoting his book with media outlets including the Pittsburgh Post-Gazette, KDKA-TV news and Authority Magazine.

Although Crafton doesn't recall the conversation as vividly as Timmons does, Crafton said that during his career he recognized several students with undiagnosed learning difficulties who he encouraged to get tested and get help if needed.

"I was only doing my job," Crafton said. "That said, I was always surprised and disappointed that students with learning difficulties could get through 12 years of schooling without being diagnosed and without getting the help they needed. By seeing Pancho having success now, it is apparent that he is a remarkable person who could manage any such difficulty."

"The smaller campus environment was really beneficial to me, and once I started getting some services (for my dyslexia), I appreciated it even more how everybody was encouraging and helpful," Timmons said. "The sense of community, with my fellow students and with my professors, was just paramount in my success and (SRU) was amazing."

The electronic version of "Quick and Easy World Change" is available on Amazon, and Timmons and Martin plan to publish the book in hard-copy format later this year.