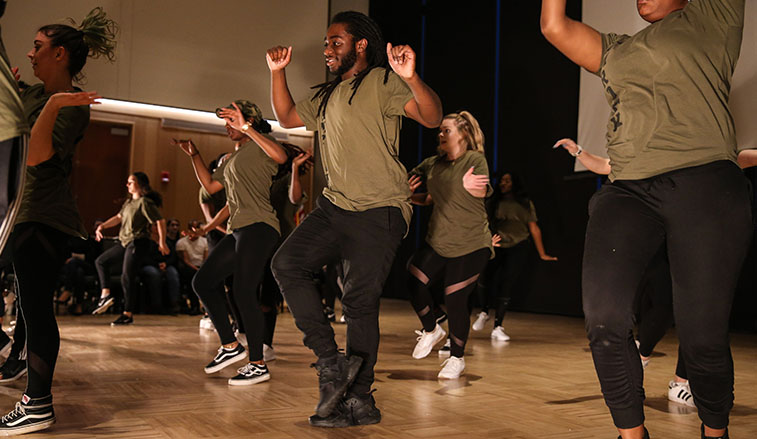 JamRock, the hip-hop dance team at Slippery Rock University, performs at more than 20 campus events each year. The origin of hip-hop music and dance dates back 45 years.

SLIPPERY ROCK, Pa. - When first-year students arrive at Slippery Rock University today they'll bring with them their own individual pop culture preferences, whether it's music, movies or fashion. And while what is interpreted as stylish often changes from year to year, some things have true staying power.

Hip-hop, widely considered the most modern form of music and dance, is now twice the age of traditional college students. Although the term "hip-hop" wasn't used until the late 1970s, the genre of hip-hop music originated in August 1973 and has since evolved to include styles of music, dance and art, while also being referenced as a social-political movement in African-American culture.

Music and dance faculty at SRU recognize how each year their students' interpretations of hip-hop have changed. As a dance instructor at SRU for the last 14 years, Teena Custer taught a jazz dance class that included forms of hip-hop or street dance. Although Custer has noticed incoming students becoming more aware of the social influences in recent years, she would often explain the history of hip-hop and how it became a revolutionary form of expression for the African-American communities from which it originated. 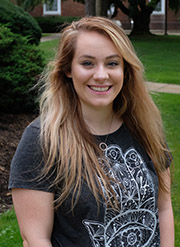 "Hip-hop dances change every year depending on whatever the new dance is," said Custer, referencing recent dances like "flossing" or "The Nae Nae" as well as early forms of hip-hop dance such as breakdancing, or b-boying/b-girling. "There's usually a corresponding song or a style of hip-hop music that goes with it. (Hip-hop) is the most contemporary form of the African diaspora of dance in America and (broadly) it's been the newest and most defining culture of the last 45 years."

Clive Campbell, known as DJ Kool Herc, is considered the founding father of hip-hop. Disc-jockeying his sister's birthday party, Aug. 11, 1973, in the Bronx, New York, DJ Kool Herc noticed how the crowd would wait for parts of songs to begin dancing, so he experimented with extending the drum break in a song by switching back and forth between two records of the same song. The innovation, later known as the break beat, was used by DJs in the 1970s and the term "hip-hop" was later coined by Keith "Cowboy" Wiggins of Grandmaster Flash and the Furious Five and popularized in the opening lyrics of The Sugarhill Gang song, "Rapper's Delight."

David Glover, SRU associate professor of music, specializes in percussion and is a fan of hip-hop music, particularly the derivative old-school rap from the 1980s.

"Hip-hop has come a long, long way in a short period of time," Glover said. "Rap and hip-hop came out of nowhere. While they had elements of James Brown drum beats and the funk from the '70s, it was a wholly new style unlike anything that came before."

However, Glover said that it's impossible to define hip-hop music because it is continually evolving.

"Hip-hop today isn't what it was back in 1984 and it's not what it was back in 1994; you can say the same about rock or country or jazz or other periods of classical music," said Glover, noting that, like dance, it is the most modern genre of music. "It just has to adapt and become something new for the next generation. That's probably why it has lasted so long: it's so adaptable. What was meaningful to me back in the early '80s listening to hip-hop is not going to be the same or have the same effect on someone who is in college now."

The presence of hip-hop at SRU is expressed in many ways, but the most intentional expression of music and dance is through JamRock, a hip-hop dance team that is a student organization at SRU. JamRock had 33 members last year and the group performed at both on- and off-campus events, but mostly at halftime of SRU home basketball games.

Gianna Tegler, a senior dance major from Rochester, New York, is this year's JamRock team captain. She took Custer's Dance Jazz class and agrees that understanding hip-hop's origins and social influences is important, but there's a reason why so many college students embrace hip-hop music and dance.

"The best word to describe it is 'fun,'" said Tegler, who chose music for the group's performances this year from artists such as Kendrick Lamar, Beyonce and Chris Brown. "I try to select songs that would get the crowd hyped and let everyone have a good time. When you are doing the dance moves, you can let loose. That's why I love hip-hop; you can add your own flair to it."

Because hip-hop is an adaptable, strong form of expression, Tegler can't speak on behalf of all SRU students' interpretation on hip-hop, but she acknowledges differences between seniors and freshmen, not just between generations that Custer and Glover have observed.

"Hip-hop is so mainstream now, but because it's so much about individuality it keeps evolving and has space to grow," Custer said.