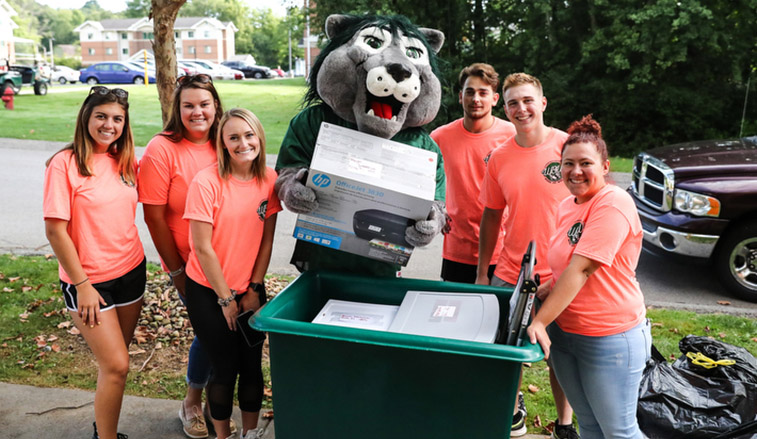 SLIPPERY ROCK, Pa. - First-year students moved into their residence halls at Slippery Rock University beginning at 8 a.m. today. But they weren't alone. Hundreds of volunteers eagerly greeted families, lending a festive air to the day and making short shrift of the work at hand.

"This is what the campus is supposed to be; everything is so vibrant," said SRU President William Behre, who officially started his job July 1 and spent the entire day helping students move in. "For me, the real start of my job is today; everything before has been a prelude. The first-year students come in and they are stressed and nervous, but they are quickly relieved because of our faculty, staff and returning students who do a fantastic job as volunteers." 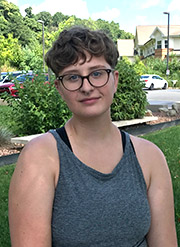 The move-in program, which in recent years was spread across two days, was fit into one day this year to maximize SRU's Week of Welcome. WOW includes 11 days of programming to set students up for success. Classes begin Aug. 27 but WOW programs run through Sept. 4.

Seeing the process for the first time, Behre called the move-in program a "well-oiled machine," as students and their families drove up to their respective residence halls and were greeted by volunteers who helped unload vehicles and take students' suitcases, totes and other belongings to their rooms.

"We pulled in and it seemed like there was this army of a thousand volunteers wearing pink shirts and we got everything moved in all of three minutes; there were a lot of helpful people," said Brett Lejeune, a freshman homeland security major from McMurray, who moved into Building B. "The weather was nice and I'm happy to start the next chapter of my life."

One such pink-shirted volunteer at Building B was Nancy Welch, SRU associate director of academic records, who last spring led the staff that registered incoming freshmen for classes during orientation.

"They visit me to schedule classes and now it's nice to see them in this environment now that they are ready to get started," said Welch, who is in her second year as a volunteer. "Volunteering is a good way to interact with the students and I hear many of the parents tell me that they moved kids into other schools and (moving into SRU) was much easier."

Diane Galbraith, SRU professor of business, had the unique opportunity to participate as a volunteer and as a parent. She helped students move into Watson Hall from 8-11 a.m. before going through the process with her son, Christopher Galbraith, a freshman accounting major from Gibsonia, who moved into Watson Hall and is an Honors College student.

"(The move-in program) is a good first impression and it helps students and families feel welcomed and that we are here to help," said Diane Galbraith, who has two children. Christopher is the first to go to college. "This is an important time for them and we're glad to be here answering whatever questions they have."

"I remember coming in my first day so I know how important it is to set the tone," said Cook, who said he and his fellow cadets feel a sense of responsibility to represent the University and make everyone's day go smoothly.

"This is a good experience for our cadets to practice leadership and planning," said Capt. Joseph Barrow, assistant professor of military science. "It's a great way to start the year and show our commitment to teamwork and the University."

While the move-in process was as orderly as a military regiment, it did not lack the sentimentality of a caring community, especially for families with students going to college for the first time.

"(The process) was fun, exciting and provided a little bit of anxiety, but it was nice having everyone move my stuff in and everyone's been helpful and friendly," said Angelina Saldamarco, a freshman exercise science major from Allison Park, who recognized the significance of the day with her being the first child in her family to go to college. "We're Italian so I have a whole box of home-made cookies and home-cooked food packed with me."

There was also a good omen among the items packed for Emily King, a freshman geography major from Pittsburgh, who brought 10 plants with her, one of which didn't bloom all year until this week.

"I don't know, maybe my start to college means I'm blooming," King said. "I was extremely nervous this morning but once I got here it was all fine. I had to take some deep breaths along the way, but it's been great and everyone's been super cool." 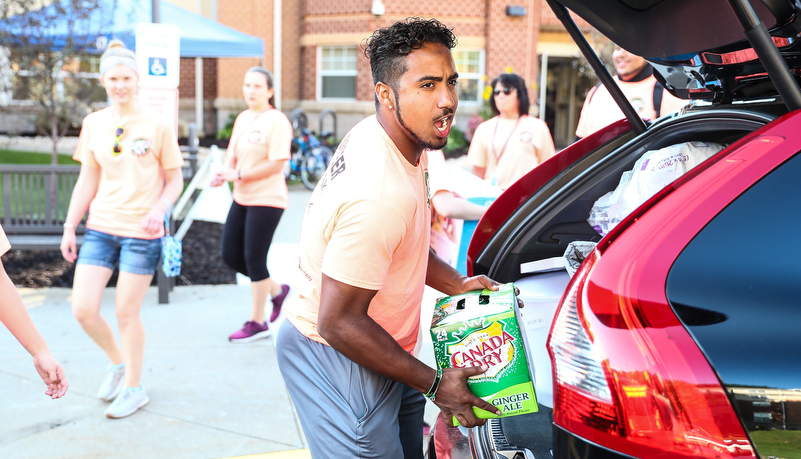 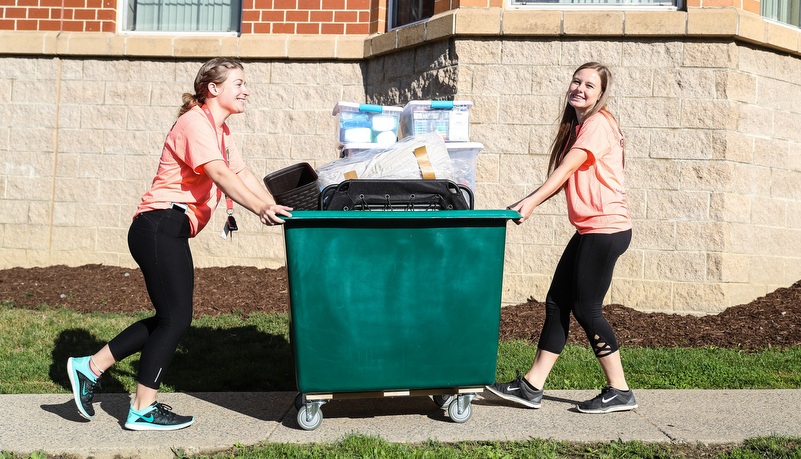 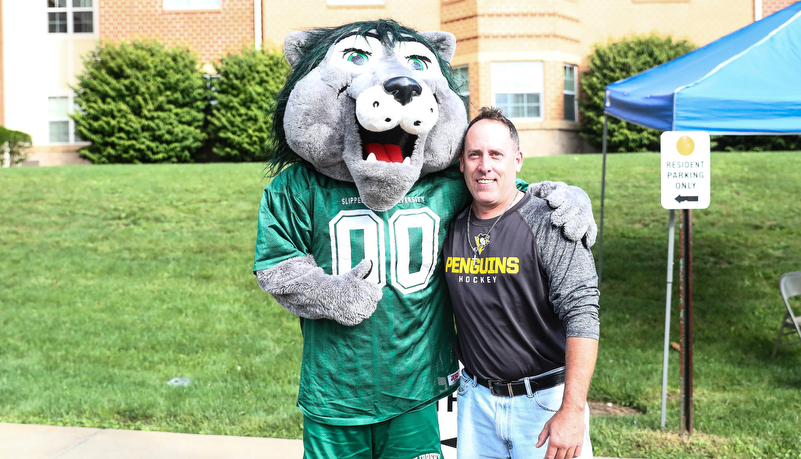 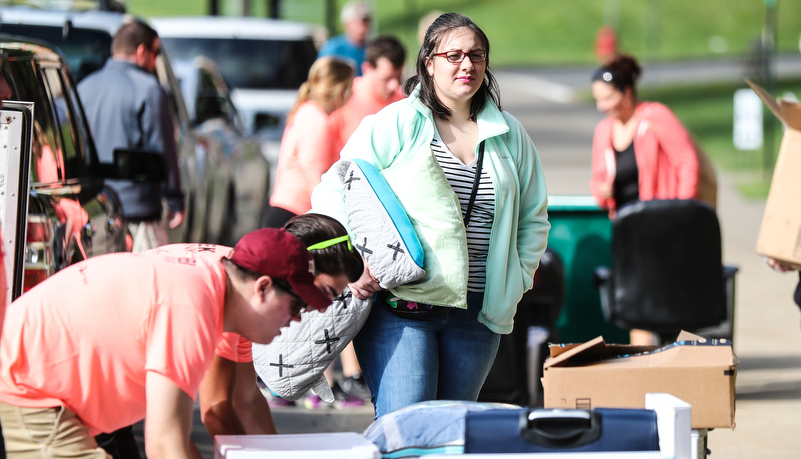 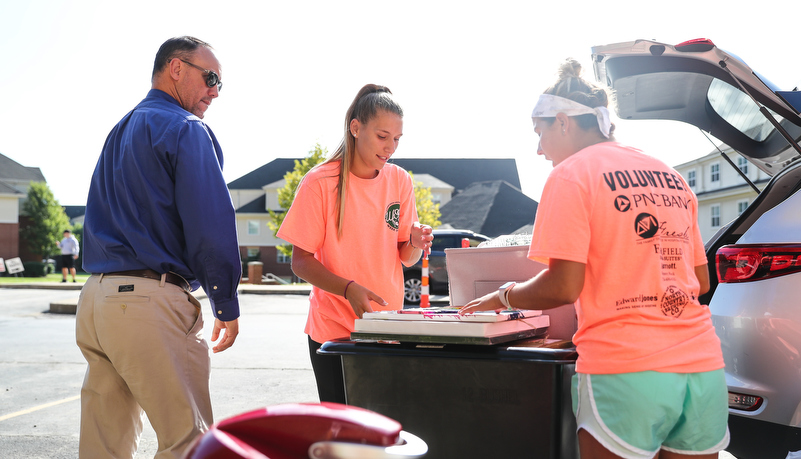 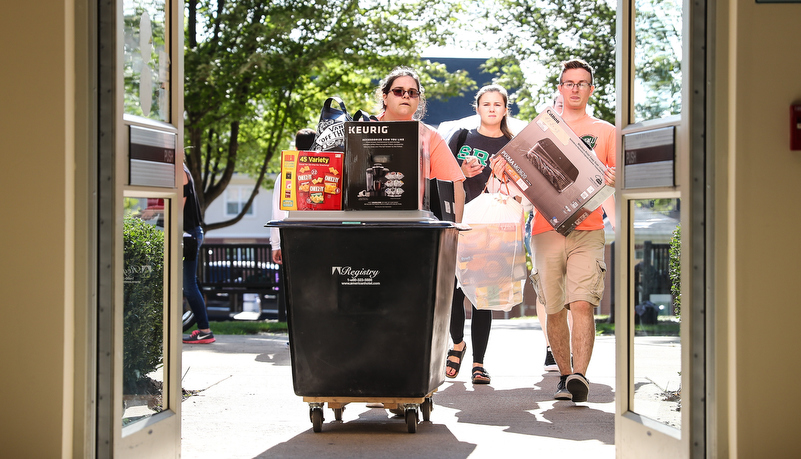 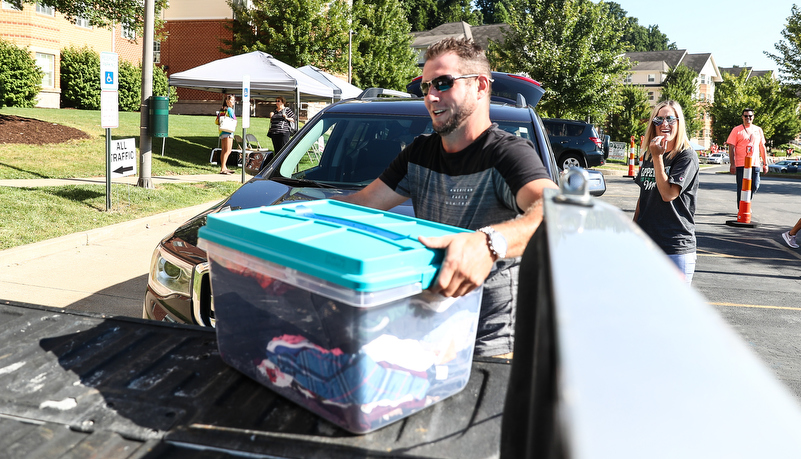 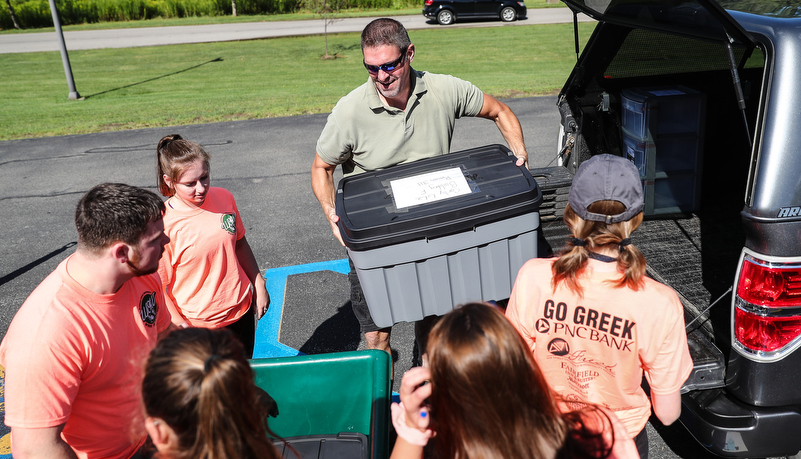 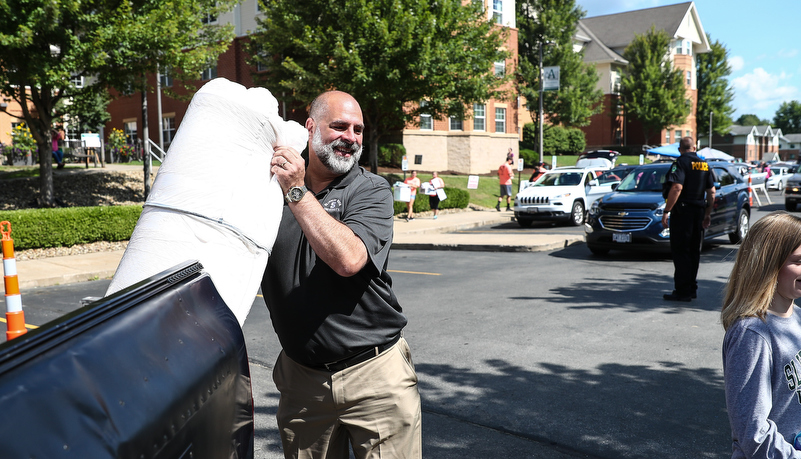 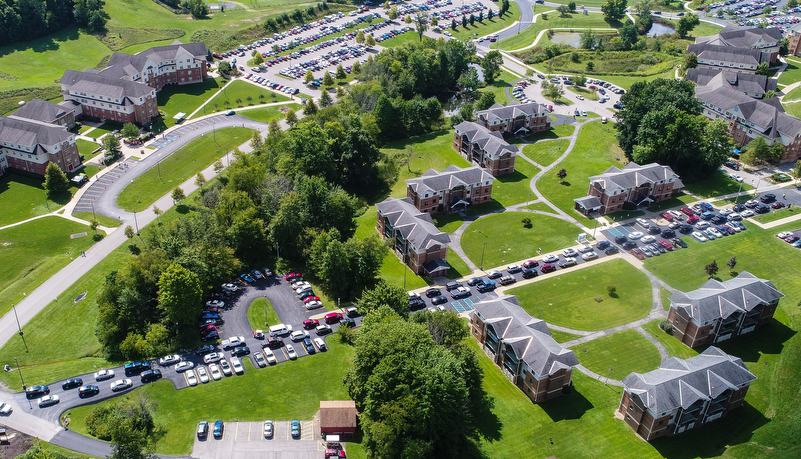 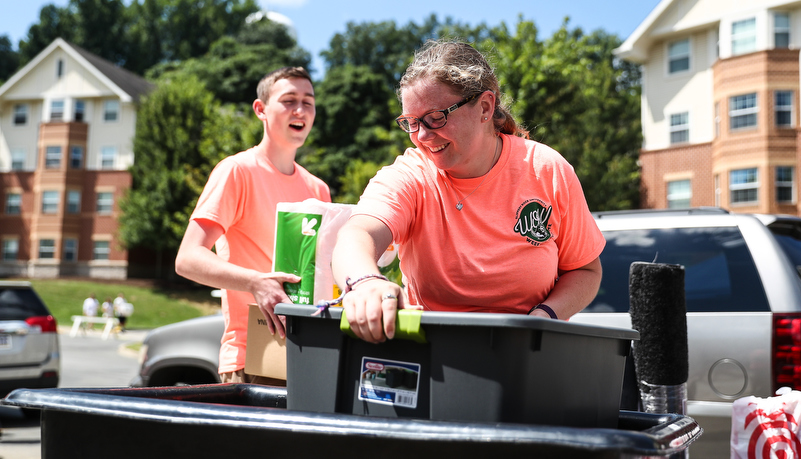 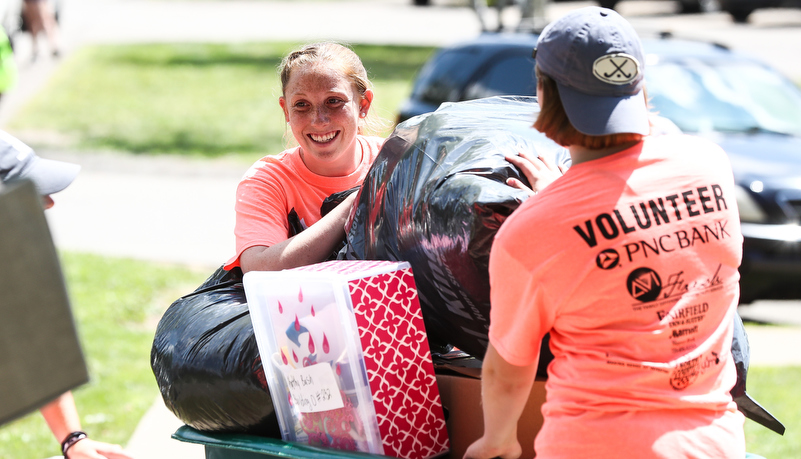 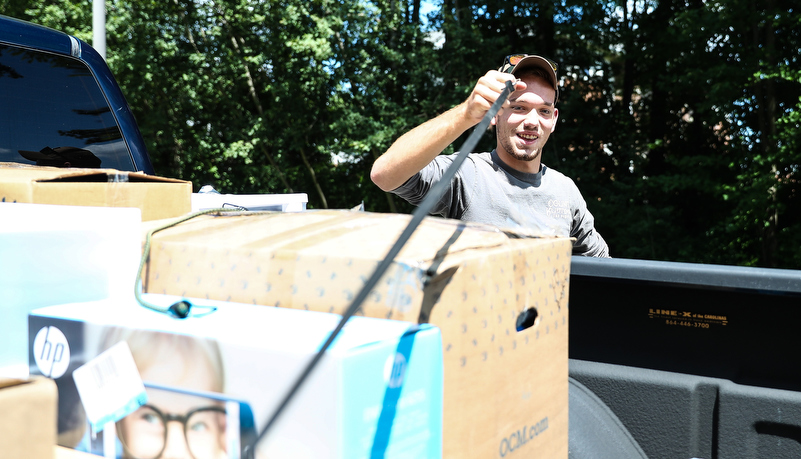 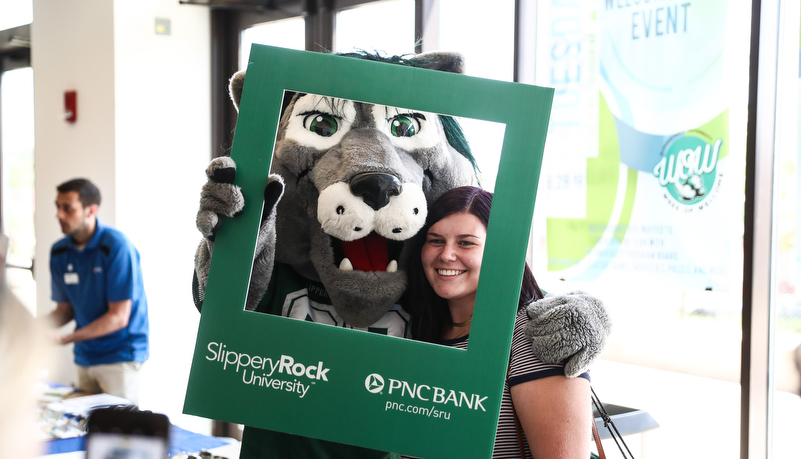 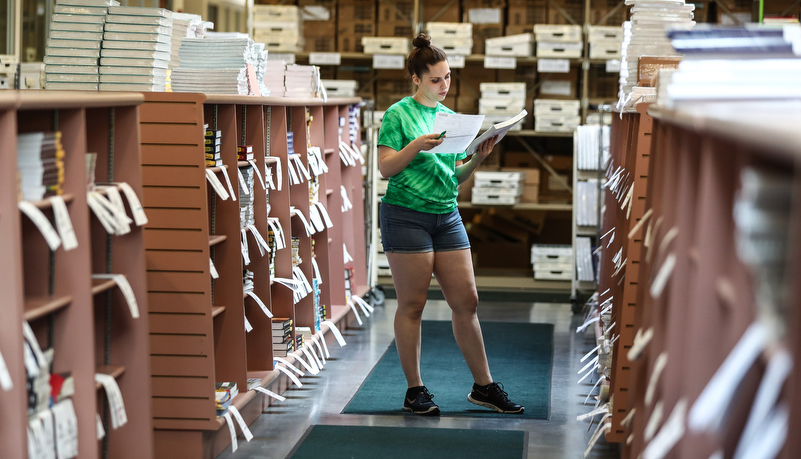 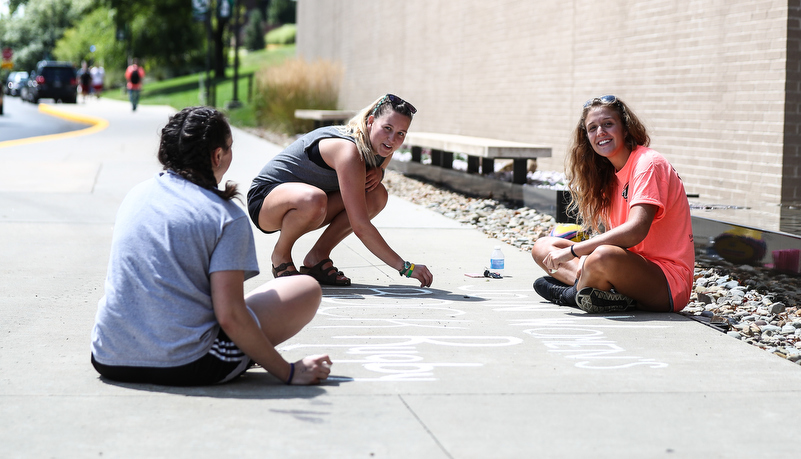 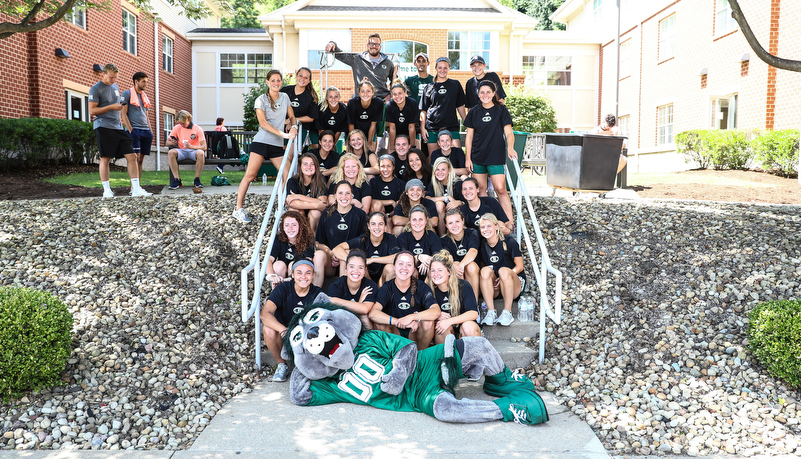 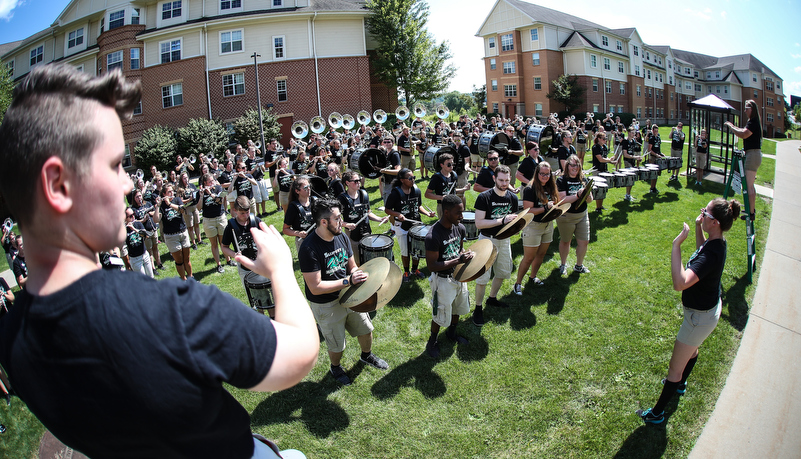