SRU welcomes the Class of 2025 to fully open campus 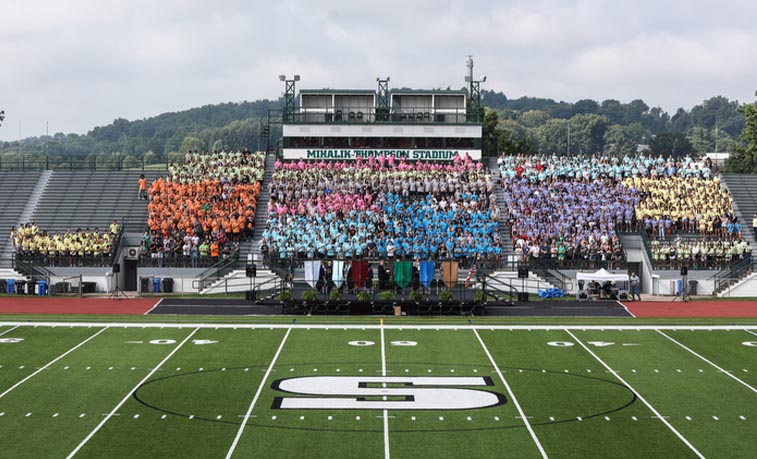 SLIPPERY ROCK, Pa. — There's pent-up excitement for first-year students at Slippery Rock University that is unlike previous cohorts. The SRU Class of 2025 is embarking on a new phase of life after completing the challenging task of choosing a college during a pandemic. But they found their right fit, they are finally here on campus and they are ready to experience all that The Rock has to offer.

Although official census data of students enrolled at SRU this year will not be reported for another two weeks, SRU welcomed about 1,400 first-year students and 450 new transfer students as fall semester classes began Aug. 23.

"We are excited and stronger together as a campus community to welcome new students and the Class of 2025," said Amanda Yale, chief enrollment management officer. "While we will continue to take safety measures with the pandemic, including masking while indoors, there's no denying what a tremendous occasion this is to have students fully back at SRU and having them be a part of an engaging experience and a more traditional campus life." 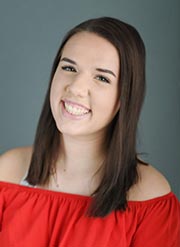 Last year, because of COVID-19 safety measures, fewer than 700 students were living on campus, compared to pre-pandemic levels of more than 2,800, and approximately 80% of SRU's classes were online. That has changed this year with SRU offering regular, in-person classes and no capacity restrictions on residence halls.

First-year students such as Sara Lieb, an acting major from Warminster, and Isaiah Williams, a public health major from Pittsburgh, are eager to be a part of the SRU community after making their college decisions and benefiting from SRU offering both in-person campus visits in small groups and virtual open houses that helped them learn about the University.

"I toured the campus in April and I instantly fell in love with SRU," said Lieb, a graduate of William Tennent High School. "The campus is so beautiful and everyone was so nice and so welcoming. I could see myself living here and I just got a very 'homey' vibe and I didn't feel overwhelmed or stressed."

Feeling at home is important because, although nearly 90% of this year's first-year students are in-state, some, like Lieb, came from the eastern part of Pennsylvania with a five-and-a-half-hour drive. Others such as Williams came from western Pennsylvania and made college decisions after attending multiple virtual sessions.

"It was difficult but I was very blessed because I have family members who are in college, including my cousin who is a sophomore at SRU (and they helped offer some guidance)" Williams said. "I know other students (at my high school) struggled with their college decisions and not being able to visit campuses and a lot of them fell off track, but for me, going through the online virtual sessions really helped out a lot." 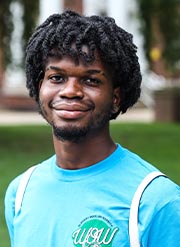 With SRU having more than 150 undergraduate programs to choose from, students like Lieb and Williams were able to find the right fit.

"It excites me to meet people interested in the same major as me," said Williams, who aspires to work in the public health field. "I don't know too many other people interested in public health and here I'll be able to have conversations about what's going on in the world. The pandemic intensified my interest and I've always had a dream to do something to save the world and have a career where I'm in a position to do that."

Williams also has opportunities to play and enjoy college life while working to save the world. Among his interests, Williams said he might get involved with Jazz Band or other music groups on campus.

The same goes for Lieb.

"I'm really excited to take classes for musical theatre and finally be going to school for something that I'm super passionate about," Lieb said. "The campus is so beautiful and I'm so excited to see all of it and go inside the buildings and just explore it."

As part of her acting major and concentration in musical theatre, Lieb will be auditioning for productions hosted by the SRU Theatre Department, but she is also interested in joining clubs such as the Musical Theatre Society.

"I feel like I'm going to be challenged and supported here and this is where I feel like I can grow and become the best version of me," Lieb said.