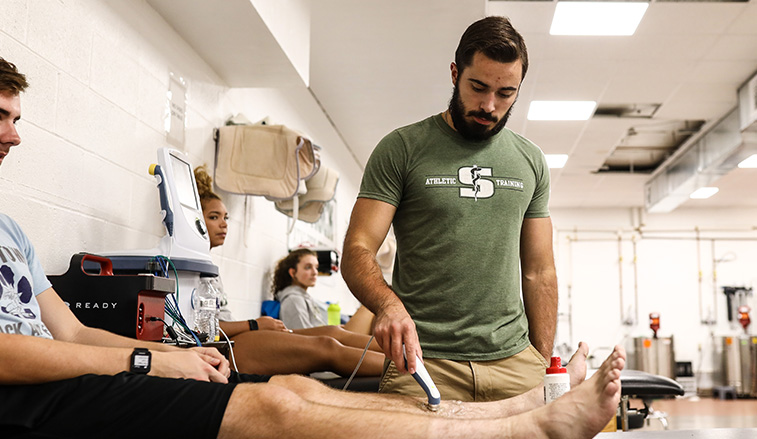 Slippery Rock University is making the route to earning a master’s degree in athletic training easier for not only its undergraduate students but also for students at other institutions by signing articulation agreements with eight partner institutions.

SLIPPERY ROCK, Pa. — At colleges and universities across the United States, athletic training programs are experiencing a transition: undergraduate programs are out, and graduate programs are in. The same goes for Slippery Rock University, where the last class of athletic training undergraduates received their bachelor's degrees in May and the first cohort of graduate students in SRU's Master of Science in Athletic Training program started classes in July.

"The only route to becoming an athletic trainer now is the graduate route," said Bonnie Siple, associate professor of exercise and rehabilitative sciences, who is the clinical coordinator of SRU's athletic training program. "There are several reasons for this change, but the main reason is that as the athletic trainer's scope of practice continues to evolve, so our level of education must do the same."

SRU is not only making the route to earning a graduate degree in athletic training easier for its undergraduate students in the health sciences but also for students at other institutions. More than eight institutions have signed articulation agreements with SRU that guarantee spots in the University's master's degree program for undergraduates from partnering schools who meet the prerequisites. 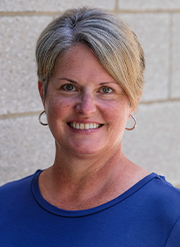 Qualifying students from partner institutions major in disciplines such as exercise science, biology, public health or other health sciences programs. SRU offers a two-year, 57-credit master's degree program, and through some of the agreements, students can earn both their bachelor's and master's degrees in five years instead of six through a 3+2 format.

SRU's first MSAT cohort consists of 12 students as articulation agreements with its partner institutions typically allow for at least two spots per school.

A big reason why SRU has been able to secure articulation agreements with partnering institutions is because of its strong alumni network. For example, SRU recently signed agreements with Central Penn College and North Carolina Wesleyan College where SRU athletic training graduates are currently working.

"We are excited to partner with SRU to enable our health science students to transition seamlessly into the its Master of Science in Athletic Training program," said Krista Wolfe, vice president of academic affairs and provost at Central Penn College. "By having a 3+2 program, this agreement with SRU is perfect for Central Penn's high achievers who are laser-focused on graduating early and entering the workforce as soon as possible."

Wolfe earned a bachelor's degree in athletic training from SRU in 1999 and a doctoral degree in physical therapy in 2002.

"As an alumna of SRU, I am proud to connect students at Central Penn College -- where I currently teach -- to my alma mater, the institution that nurtured and shaped me as a health care professional and educator," said Wolfe, who currently serves on the Pennsylvania State Board of Physical Therapy.

The other schools to sign agreements with SRU are Edinboro University, Grove City College, Thiel College, Millersville University and Seton Hill University, along with Dominican College in New York and the recently signed NCWC.

"We are honored to have this opportunity to work with such a prestigious academic institution as SRU," said Meir Magal, professor of exercise science at NCWC. "This option will allow our students the opportunity to join an outstanding athletic training program that provides rigorous academic curricula and a superior hands-on, patient-centered clinical experience."

The connection between SRU and NCWC was spurred by Tim Donovan, a 2009 SRU graduate with a degree in athletic training, who is the head athletic trainer at NCWC.

"The SRU alumni network stretches across the country," Siple said. "Our former students want to give back and that desire has created a ripple effect through athletic training education at other institutions that's really cool to see."

To learn more about the Master of Science in Athletic Training degree at SRU, visit the program's webpage.