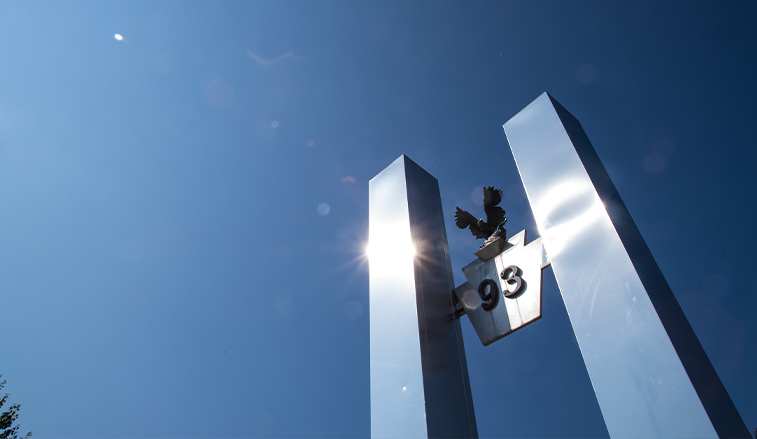 Slippery Rock University will commemorate the 20th anniversary of 9/11 with a series of events, Sept. 7-11.

SLIPPERY ROCK, Pa. — Commemorating the events of Sept. 11, 2001, is becoming more important, and it's not just because of milestones such as the upcoming 20th anniversary of the terrorist attacks. What was once an opportunity to mourn and reflect on the tragic events of 9/11 is now also a chance to educate people, and that's why Slippery Rock University is hosting nearly an entire week of 9/11 programming, Sept. 7-11.

"We want students to learn about it because many college students either weren't alive or they were too young to remember it," said Jordan Titera, instructor of homeland and corporate security studies, who is an organizer of SRU's 9/11 events.

Dalton Brandt, 21, a junior homeland security major from Ambridge, is among the SRU students who were too young to recall 9/11. Now the president of the Security Studies Club at SRU, Brandt is preparing for a career in federal law enforcement or counterterrorism intelligence.

"I chose my major and to go to SRU because of events like 9/11 and the Las Vegas shooting (in 2017). E and all these events like these that have happened throughout my lifetime have compelled me to want to be a part of defending our country," Brandt said. "(9/11) brings about sad emotions, but also a little bit of anger and that's what I feel when I see video of the planes crashing into the (World Trade Center) towers." 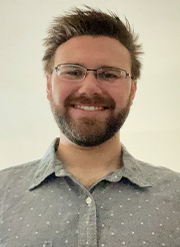 The events of 9/11 have also impacted entire work sectors, adding to the need for counter-terrorism professionals. This is a reason why SRU added homeland security and corporate security as an academic major in 2016.

"9/11 framed how a lot of our society and country wereare run from that point forward, so it's really important that we are continueing to learn and reflect on what happened," Titera said. "It touches many sectors, not just homeland security, but education, government, the entertainment industry ... basically, anything that affects the understanding of different cultures and how people see the world."

SRU faculty, staff and student organizations are leading events on campus where a variety of aspects will be discussed, from the effects on people (post-traumatic stress disorder) and objects (engineering of the World Trade Centers) to societal changes that include government foreign policy, popular culture and volunteerism.

There will also be events that will have less dialogue but no less meaningful, such as a memorial ceremony and a stair challenge to honor the first responders who climbed the 2,071 steps of the World Trade Centers on 9/11.

The highlight of the event will be a presentation by keynote speaker Ret. Lt. Col. Robert Darling, a former active-duty Marine who was an airlift operations liaison officer with the White House Military Office and was in former President George W. Bush's bunker on 9/11. Darling's presentation will detail the 24 hours he spent advising White House officials as part of an event that is open to the public, 12:30 to 2 p.m., Sept. 7, in the Miller Theater at the Performing Arts Center. The event will be opened by a collaborative performance hosted by the SRU Music and Dance departments.

"We're excited to have Lt. Col. Darling coming to campus to share his first-person account of the events of 9/11, as well as aspects of crisis leadership and decision making," Titera said. "He will take the audience through the moment the attacks were realized to courageous decisions made to respond to them, as well as the policies our country now has in place to prevent similar attacks from happening again."

Other events on Sept. 7 will include a presentation by Jennifer Sanftner McGraw and Catherine Massey, professors of psychology, titled "PTSD and the Psychological Impact of Trauma Resulting from the 9/11 Events," from 5-6 p.m. in Vincent Science Center, Room 105. Lia Paradis, professor of history, will present "9/11 in Popular Culture: How Hollywood Processed 9/11" from 7-9 p.m. in the Smith Student Center Theater. 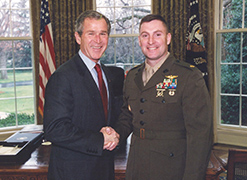 Paradis is the host of a history podcast, "Lies Agreed Upon," that had its first season include episodes that analyzed the impact of 9/11 on film and television and her presentation will address the topic.

"We'll look at how (the film industry) processed (people's) trauma and shock in the aftermath of 9/11 and all the wars and the collateral damage from it in the last 20 years," Paradis said. "There were movies that seemed to look at the Crusades or the Spartans fighting the Persians or Alexander the Great, but what they were really about is how the West, and in particular the United States, thought about Muslims and the East and countries that we vaguely understand to be 'Arab.' It's a disguise that Hollywood was putting on as if to say, 'What do we think about these people.'"

The remainder of the 9/11 events are:

In addition to the events listed above, there will be two weeklong exhibits: a display of books in Bailey Library about topics and events related to 9/11, as well as a campus-wide "Where Were You" project to showcase where faculty and staff were on 9/11, coordinated by the philanthropy and nonprofit management program.