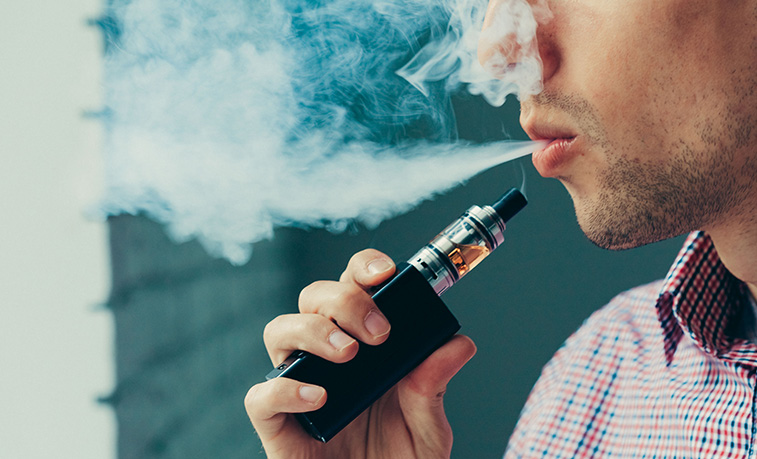 Slippery Rock University’s Student Health Services is warning students about use of e-cigarettes after national and campus trends have shown increased use in recent years.

SLIPPERY ROCK, Pa. — As the number of smoke-free college campuses across the country - 2,375 as of July 1 according to the American Nonsmokers Rights Foundation - continues to rise, so to does the alternative to "lighting up": electronic cigarettes.

The use of vaporizers such as e-cigarettes and other inhaling devices has become increasingly common on college campuses in recent years. And while the aerosol plumes emitted by someone using an electronic vaping pen are not the same as the smoke from tobacco cigarettes, the associated risks are still a concern. Count health officials at Slippery Rock University, as well as students who are studying the effects of e-cigarettes, among those concerned.

"You see (e-cigarettes) everywhere; just by walking around The Quad, you'll see these huge puffs," said Megan Pesci, a junior exercise science major from Indiana. "It follows the national trend of high school and college students not knowing a lot about (adverse effects of use) and getting addicted to it, and our campus absolutely follows that trend."

E-cigarette use has only been measured in recent years in the American College Health Association's National College Health Assessment, but statistics from 2016 to 2018 show increases from 4.3% to 9% in college students nationwide who say they used an e-cigarette in the last 30 days. SRU students taking the survey indicated a larger increase, from 4.5% to 11.9%.

"That's a significant jump that concerns us because they are coming here already addicted," said Vanessa Vought, health promotion coordinator at SRU's Student Health Services. "They are starting to use earlier and earlier and by the time they get to college they are already addicted. That is a big problem because your brain is not fully developed until you're around 25, well past the age of typical college students. That usage can affect your brain development and your success in college."

"E-cigarettes just don't have the stigma compared to cigarette smoking," Vought said. "(E-cigarettes) have cool flavors, they smell good and the companies that are selling them are putting out these messages that they are not as harmful as cigarettes."

Vought is providing more education about e-cigarettes for SRU students through the University's Healthy Outreach Through Peer Education. Known as the HOPE Peer Educators, the group conducts programming in conjunction with the American Cancer Society's Great American Smokeout each November.

While e-cigarettes lack the tobacco and tar, they contain higher concentrations of nicotine than cigarettes. Although nicotine does not cause cancer, it is highly addictive and harms brain development, according to the U.S. Surgeon General's Office.

There are also chemicals such as diacetyl, which has been linked to lung disease, and ultra-fine particles that are inhaled by e-cigarette users. Scientists are studying the effects, but with e-cigarettes being a relatively new product, there is not enough data to prove the long-term effects.

"But it's coming; it's only a matter of time," Vought said. "We want students to take these risks seriously and I don't want a student who is addicted now to find out later that it might develop into something serious because it's the same thing that happened to cigarette users decades ago. It wasn't until much later that we found out how harmful they are."

Braden MacBeth, a 2019 SRU graduate with a degree in computing, decided to conduct his own research. After taking a Medical Ethics class at SRU last year, he began submitting monthly articles to Science-Based Medicine, a website that explores issues and controversies related to science and medicine.

One of his articles titled "Vape Nation: Vaping is Bad, Kids," addressed how the vaping community downplays the risks even after the Surgeon General declared youth e-cigarette use an epidemic.

"A lot of people are doing it but we don't fully understand the risk profile because it's a new thing," said MacBeth, who is currently working as a software engineer with intentions of applying to medical school to become a psychiatrist. "We definitely know it's not good. This was a good topic to study because there was a lot of research that has started to come out and that's why I decided to write the article."

A research group from SRU is also contributing to the investigation of e-cigarettes usage.

Pesci and Julia Tremel, a senior exercise science major from Pittsburgh, with supervision from Steve Verba, associate professor of exercise and rehabilitative sciences, are conducting a study to see if acute bouts of exercise can mitigate cravings for JUUL, a type of e-cigarette.

"There have been similar studies done previously with cigarette cravings, so we're thinking exercise might mirror the effect to reduce cravings," Pesci said. "This is an epidemic and we think this topic is relevant to our students. Research will continue to come out (from others), but we hope studies like this can help make progress and get the word out about the risks and effects. Anything we can do to stop the addiction and the probable health effects down the road (will help)."

Participants in the study must be college students, ages of 18-24; frequent JUUL users with no desire to quit within the next month; and must have a sedentary lifestyle with little or no regular exercise. The protocol involves three visits: a baseline to gather medical information, 15 minutes of aerobic activity and 15 minutes of resistance training. During the exercise visits, participants will be asked to measure their cravings before exercise, immediately after exercise and 10 minutes after exercise.

The SRU research team has already tested 10 subjects and are seeking at least 10 more participants this semester. Individuals interested in participating can contact Pesci at mgp1005@sru.edu or Tremel at jmt1021@sru.edu.