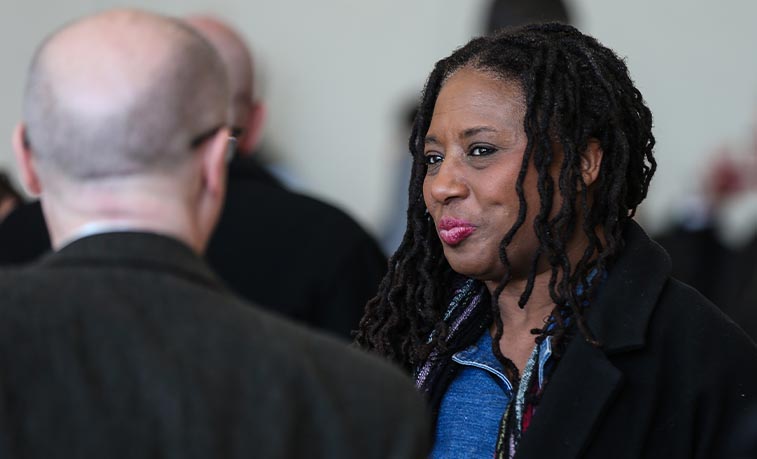 Ursula Payne, a Slippery Rock University professor of dance, worked in St. Elizabeth Hospital in Youngstown, Ohio, during her sabbatical, and now she’s serving as the University’s liaison to the State System for diversity, equity and inclusion.

SLIPPERY ROCK, Pa. — Two of the most prevalent issues the world is facing today are the COVID-19 pandemic and social inequality, neither of which would seemingly rely on the expertise of a performing arts faculty member. But Ursula Payne, a professor of dance at Slippery Rock University, has confronted both in separate roles that go beyond her job title or contributing in a way that people would generally say is "just doing their part."

After serving on the front lines in the fight against COVID-19 by working at a local hospital, Payne is answering a very different call by filling a role as SRU's liaison to a group addressing diversity, equity and inclusion across Pennsylvania's State System of Higher Education.

Appointed by SRU President William Behre, Payne is serving as the University's liaison to the State System and Denise Pearson, vice chancellor and chief diversity, equity and inclusion officer, along with a group of other DEI officers from the State System's 14 institutions. Payne is taking on this role until SRU hires a new chief diversity officer, an opening that was announced earlier this summer, after the University decided to elevate the position to a cabinet-level executive appointment.

Payne was a logical choice to be the liaison because she has worked collaboratively on statewide initiatives as the director of SRU's arm of the Frederick Douglass Institute Collaborative, which helps create inclusive university communities and transformative connections among historically underrepresented students and faculty.

"I see it as a way to interact with SRU administration and the State System, and doing it in a way that gives me a sense of the big picture," Payne said. "As the director of the Frederick Douglass Institute, my focus has really been central to our campus, whereas this particular role is looking at how diversity, equity and inclusion are applied or integrated across the entire State System."

Payne will attend monthly meetings and provide input from the SRU perspective on DEI matters that a chief diversity officer would normally do. Payne is being credited with release time for her liaison and FDI positions in addition to teaching three courses this semester.

Among the initiatives, policies and issues that the statewide DEI group is discussing are restorative justice training, where departments or student organizations will have access to resources related to anti-racism and creating environments that restore marginalized groups, repair relationships when harm has occurred, fostering an overall sense of respect in communities and reintegrated people so they are included. "(The training) is about allowing people to have a voice and to think about people's behavior," Payne said. "When we say the word 'equity,' we need to be really clear about our understanding of it and how it relates to human dignity, so that we are recognizing (dignity) in our interactions and relations with one another. And we also want to do more things where more people feel that they can bring their whole selves to the campus community and to their classrooms."

Other topics include issues related to education attainment and access to higher education, particularly for marginalized groups in the state.

As Payne is gaining a bigger picture on matters of DEI across the State System, she also recently got a closer look at another public concern: the COVID-19 pandemic. While on sabbatical from her faculty role during the 2020-21 academic year, Payne worked on the front lines fighting COVID in early 2021 at Mercy Health-St. Elizabeth Hospital in Youngstown, Ohio.

She was placed as an hourly temp worker through Maxima Health Care Agency and a program called Helping Hands, which she learned about as a member of Delta Sigma Theta sorority.

"I answered one of their calls," Payne said. "They needed people to go into different health care facilities during (the COVID-19 pandemic) and to do certain tasks because at that time they were maxing out on cases and the hospitals were full with patients. They needed the nurses, doctors and the first responders to avoid having to do certain things so they could focus on patient care, because having to do the coordination of calls for (a health care professional) could literally take all day."

Payne worked an eight-hour shift, two days a week for seven weeks, as a virtual communications coordinator, where she helped set up telehealth appointments between patients and doctors, as well as virtual visits between patients and their families because of hospital lockdowns. She worked in most all areas of the hospital, such as ICU, rehabilitation and the stroke unit, but notably with COVID patients, which presented the need for her services.

Payne was able to apply her technology skills, having previously adapted online learning for dance classes, choreography, performances and other activities related to her regular job via Zoom. She also applied her knowledge of body movement.

"Having been an administrator and working in dance, which is a high-touch type of field, I was able to apply those skills, but what else was important were empathy and communicating with families in grieving and high-stress situations," Payne said. "How you communicate with them and being able to read body language and sense emotion (are important). I'm a certified movement analyst, so my training was really helpful."

Payne has research experience in kinesiology, the study of human body movement, and somatic education, which is a field within bodywork and movement studies that emphasizes internal physical perception and experience.

"Seeing the impact of COVID up close really solidified for me the insidiousness of this disease, in terms of how it impacts the body," Payne said. "It really doesn't discriminate; I saw people of all ages, races, statuses of wealth."

That being said, Payne was eager to return to in-person classes at SRU this semester because she was able to understand the disease and confront the fear of the unknown.

"I didn't want to be afraid of it," Payne said. "It's important for students to get back in the studio together. We are such a high-touch field and there are ways that we can do that and still remain relatively protected. Having that experience in the hospital, I can convey that to my students."

Overall, Payne felt a call to serve, and being on sabbatical, she was able to answer that call.

"I just felt like, as a citizen and a member of the community, that I needed to take something off (health care professionals') hands," Payne said.