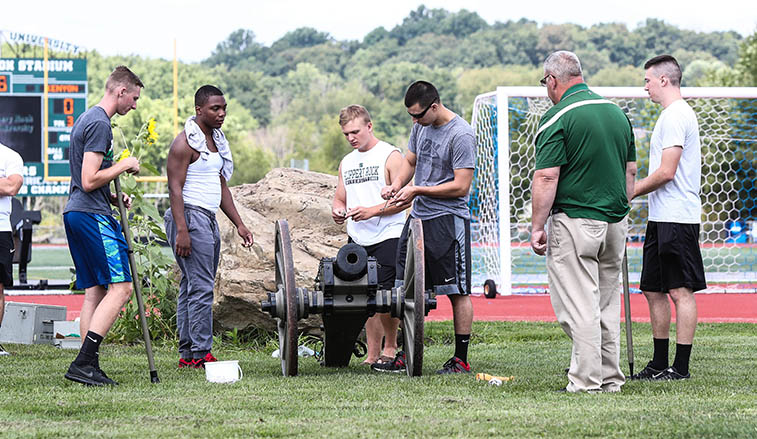 First-year members of Slippery Rock University’s Army ROTC program prepare the cannon that is fired after each time SRU scores during home football games, a tradition that dates more than 25 years.

As part of a tradition at SRU home football games that dates back more than 25 years, cadets shoot a howitzer cannon near the south end zone after each Rock touchdown and field goal. Last week, 19 first-year cadets tested the cannon in advance of the season's first home game, Sept. 1 versus Kentucky State University. The group received instruction from George McDowell, SRU's recruitment and retention strategist/veterans certifying official, who shoots Civil War-era weapons as a hobby and helped SRU obtain one of the cannons used on game days. 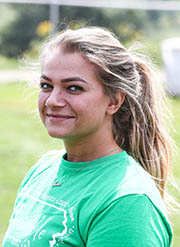 "We score fast," said McDowell, who is also the public address announcer at SRU home football games. "The team scores 50-some point sometimes. We have to plan on that."

Part of the reason why SRU uses two cannons is due to the availability of ammunition, or lack thereof. At least one game per year, they shoot a World War II-era 75-millimeter pack howitzer. However, the number of cartridges provided by the U.S. government is limited. So, the cadets normally use a Civil War-era replica 2-inch pack howitzer, which doesn't produce as loud of a bang but it's still enough to rattle your senses if you're not expecting it.

"The crowd loves it and we hope it provides motivation for the team and maybe intimidates our opponent," said Capt. Joe Barrow, assistant professor of military science. "It's a long-standing tradition that gives our cadets an opportunity to show their teamwork and precision."

The precision begins early in the week when cadets prepare the charges, packing black powder in molded foil with a dowel. They prepare between 12-15 charges for each game, which may seem like enough, but they have run out before. In addition to touchdowns and field goals, they shoot the cannon after the national anthem and at the conclusion of the game. And, of course, there could be duds: charges that fail to fire or shots fired when touchdowns are called back.

"We definitely need to start looking at the stats to see how many we need," said Rosanna Chirumbolo, a senior criminology and criminal justice major from Pittsburgh, who is leading the cannon crew this year as part of her battalion staff duties for public affairs, which includes coordinating the color guard and Veterans Day events.

As many as six of the battalion's 80 cadets serve on the cannon crew each game, which is a sought-after position to not only earn merit points but to watch some football.

"We feel like we are part of the game-day atmosphere and the pageantry of college football," Chirumbolo said. "This is a good way to build camaraderie and morale because (the cadets) are usually with their platoon or their squad, so when they come here they are all mixed together."

"This is something cool to do and we get to watch some football and be closer to the action," said David Dimun, a junior homeland security major from Butler. "I'd probably be watching football on Saturdays anyway."

As a transfer student, Dimun was among the first-year cadets training on the 2-inch pack howitzer, which the University purchased from a Civil War arms dealer in Virginia five years ago for $3,000, on a recommendation from McDowell.

"It's all part of the game-day tradition and something that we wanted to continue, so when George said we could buy one, I said 'Let's do it,'" said Paul Lueken, SRU director of athletics.

"It's a lost art, that's for sure, in terms of how George teaches them to use the cannon."

McDowell teaches the cadets the positions of the cannon crew, which include the rammer, the loader and the gunner's mate. An officer calls out the commands, to ensure a safe, efficient process. The officer's role this year will be performed by Jake Beretta, a junior homeland security major from Harrison City, and Mitchell Nelson, a junior safety management major from Corry. The remaining positions vary based on who is available for each game.

"Everyone wants to fire it, so I tell them every round to just switch it up," Chirumbolo said. "It's one of the more fun things we do."

The cast-iron, Civil War-era pack howitzer can no longer be used for live rounds, but it's still effective for shooting blank charges. According to McDowell, a 12-pound ball shot from that model of cannon can hit targets up to 1,000 yards away. The term "pack" comes from the cannon's ability to be broken down into several pieces so that the artillery piece can be transported by a mule or pack animals.

During the cannon testing last week, McDowell had the cadets shoot several charges with three ounces of powder before one final test with six ounces for a louder bang and more smoke.

"It's a great tradition," said retired head football coach George Mihalik, whose 28 seasons at SRU included the early 1990s when the cannon-firing tradition started after ROTC members at the time asked to do it. "There may be other universities that have some type of similar celebration for a touchdown but I don't think any university has such a loud bang with that magnitude that we have for Rock football."

Mihalik has fond memories of the cannon, like when his wife, Laura, was across town watching their daughter, Beth, cheerleading at a youth football game and she listened for the cannon fires to know if her husband's team was doing well. Always impressed by the cadets' promptness and certainty in signaling touchdowns, Mihalik once even used their confirmation to argue with a referee who nullified a touchdown despite the cannon firing.

At 1 p.m. Saturday, the cannon crew will again be ready to signal scores and the continuing of a tradition, but also to see if they have enough firepower to keep up with this year's Rock football team.