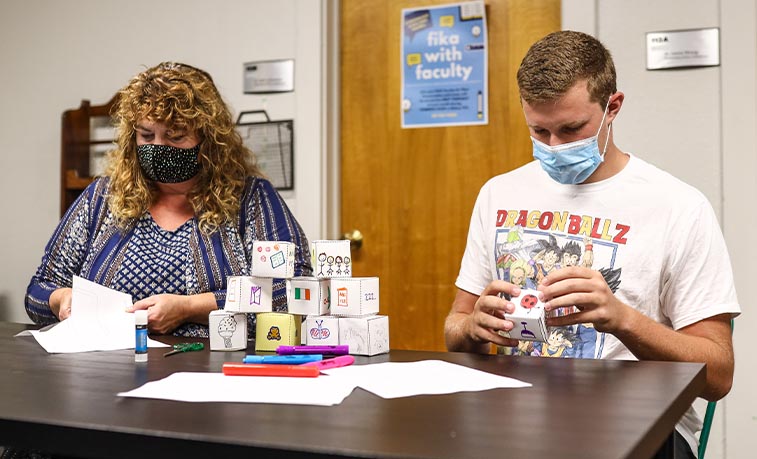 From left, Laura Strong, a Slippery Rock University instructor of elementary education and early childhood, and SRU student Erik Amodei create story cubes that are being used as part of a faculty-student research project to facilitate English language learning.

SLIPPERY ROCK, Pa. — The simplest images can spark conversation. That's the premise of a noncompetitive game called Rory's Story Cubes, invented by Irish game designer Rory O'Connor, which helps prompt discussions based on images on the sides of dice. Researchers at Slippery Rock University are rolling out their own version of story cubes to spark language learning for children in the classroom.

"This is a great way to facilitate oral language expression with English language learners," said Laura Strong, an instructor of elementary education and early childhood. "We're focusing on how to increase language production and to get children to become more expressive in a culturally responsive way, which means treating students as individuals regardless of their background or experiences and having instruction that accommodates their difference."

The story cubes provide prompts that the children can interpret based on illustrations, stickers, images and other symbols. Strong has been working with an SRU student, Erik Amodei, a sophomore early childhood education major from Grove City, as part of SRU's Summer Collaborative Research Experience grant program for a mixed-methods research study to determine the best way to use story cubes in the elementary school classroom.

Amodei, who is paid a stipend through the $5,000 SCORE grant, conducted research with a summer literacy program in a suburban Pittsburgh school district by observing classes where the story cubes were used with children learning English as a second language in kindergarten through third grade. The qualitative portion of the study includes Amodei's field research, while the researchers will also collect survey data from the teachers.

"This has helped me gain a deeper understanding of English language learning," Amodei said. "It's going to help me a ton because there are kids who can speak English fluently and there's kids who don't speak English at all in that classroom. It just depends on how much they're trying to learn English at home. But all the kids start somewhere different, even if they're the same age, and it's the teacher's job to help them improve wherever they are."

Unlike the Rory's Story Cubes, which is played by rolling small, traditional size dice, the SRU researchers' story cubes are made with drawings and stickers on sheets of paper folded into a cube. Also, the teachers and students don't just roll the paper cubes for discussion prompts, although that is an option. Instead, the SRU researchers are testing different approaches.

"We prepared about 10 strategies that we suggested that they use so that it covered of a range of grades and skill levels," Strong said. "There's a plethora of ways that teachers could use these cubes, but other research has supported using any type of manipulative to increase language production, so this is useful in the way that (a learner) gets to hold it in (their) hand and see images to produce words that help tell a story."

For example, a cube with an owl, a lightning bug and a frog can be used to help the language learner tell a sequential story about going camping and the differences between what they would see during the night and during the day.

Amodei first learned about this research before he was even an SRU student. His mother, Michelle Amodei, is an SRU associate professor of elementary education and early childhood who began researching story cubes with Strong a few years ago but for language learners at the preschool level.

"I've been really impressed with Erik, not only for his willingness to conduct the research, but he has that maturity needed to connect with the professionals in the classroom," Strong said. "He conducts himself in a professional manner as a researcher."

Strong and Erik Amodei plan to present their findings at conferences early next year, where Erik Amodei will gain even more experience as a researcher by also networking with professionals in the field to develop his career.

"I've always been interested in trying to get into some type of research, and this was perfect to get right into it," Erik Amodei said.