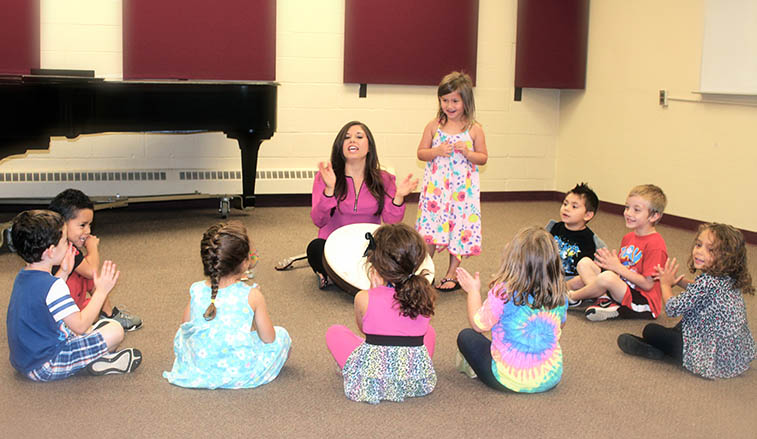 Cassandra Eisenreich, middle, a Slippery Rock University assistant professor of music, will lead a group of music education students in introducing music exploration to children at the Slippery Rock Student Government Association Preschool and Child Care Center courtesy of a “Pre-K Counts” grant from the state of Pennsylvania.

SLIPPERY ROCK, Pa. - For many, music is a fundamental part of life, whether you're blasting Ed Sheeran and Drake through your earbuds between classes or you're ready to step on stage for your senior recital.

One's love of music typically starts at a young age in places such as the back seat of your parents car listening to Disney sing-alongs or your first band class where you're just trying to understand how to correctly grip a flute. But for children attending the Slippery Rock Student Government Association's Preschool and Childcare Center, musical exploration will begin at an even earlier age.

"We have been talking about the importance of music in a child's life and how we would really love to collaborate with the SRSGA preschool, which is how this was all kind of born," said Eisenreich.

"We're really focused on developing the children as people. We'll be working on developing their character, talking about being positive, having respect for others, sharing, cooperating, being honest ... all of the things that happen in any classroom, but adding a musical element," Eisenreich said.

Session activities will include a musical petting zoo where University music majors play for the preschoolers and then allow the children to explore the instruments under the supervision of the instrumentalist. Another session will be a character building activity where students will move about the room as they please with Eisenreich playing music to accompany their movements.

"An activity such as this makes students excited to participate and allow them to become inspired by the music and to take ownership of their creativity while they also refine essential skills such as hand-eye coordination and fine and gross motor skills," said Eisenreich.

Lisa Ringer, director for the SRSGA Preschool and Childcare Center is excited for the preschoolers to begin the program, noting that children of such a young age tend to learn best through play and active exploration such as dancing, singing and playing instruments.

"It is our hope that the program will spark an interest in music and the arts in general for the kids that will become a lifelong love," Ringer said. "Our goal is to expose them to everything we can to help them grow into the people that they are destined to become.

"We teach them the skills they need to be successful in society and a lot of that can be taught through music including through simple performance. We want them to not be shy or afraid to sing with a group or to stand up and play the hand bells or drums. It's important for them to just have confidence and self-control."

"Lots of universities have similar music degree programs," she said. "But what this program provides our students with is a hands-on experience where they are actually going to be able to run a class and instruct young children. This type of opportunity is not typical at most other institutions. It gives our students a leg up."

"The thing I'm most excited about with this opportunity is just getting to have the experience of working with younger children," said Daniels. "I've had a little experience with helping Dr. Eisenreich with the preschool kids before, but nothing as far as running my own class. I'm excited to learn along with my classmates what I'm good at and what I need to improve."

"I am most excited to have the opportunity to give these children more experience with music, as (music) is such an incredibly powerful medium for joy and learning," Upchurch said.