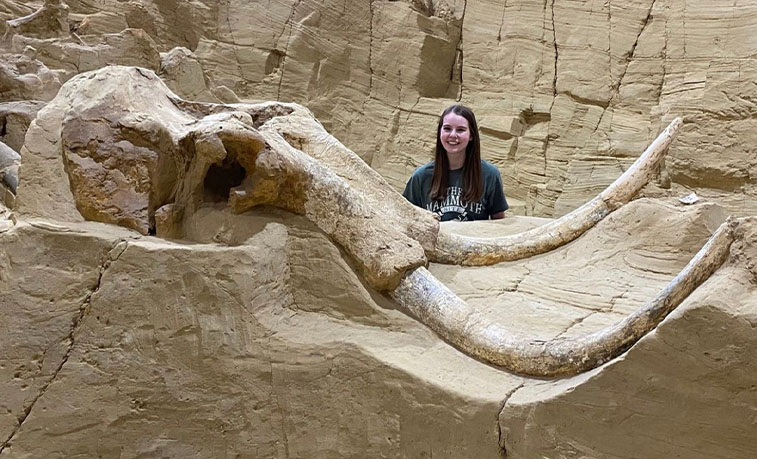 Jenna Kriley, a Slippery Rock University junior biology major, worked as a research intern at the Mammoth Site in South Dakota, home of mammoth remains that include “Beauty,” which got its name because its skull is in near perfect condition with both tusks still in their sockets.

SLIPPERY ROCK, Pa. — Similar to a vacation road trip, the journey through college toward a career is not just about the destination: there are things to experience along the way. Jenna Kriley's summer internship is an example. Kriley, a Slippery Rock University junior biology major from Butler, is pursuing a career in the medical field, but she couldn't resist the opportunity to dig up some wooly mammoth fossils.

Kriley's diversion into dirt literally started on a cross-country road trip. Five years ago, her family discovered the Mammoth Site of Hot Springs, South Dakota, as a place to visit as they were traveling west because Kriley has always been interested in science. At the time of her visit, however, tourists could only dig at a mock site, so Kriley inquired about how she could be among the scientists unearthing the active paleontological site that has more than 1,200 Ice Age fossil bones, including the remains of six mammoths. 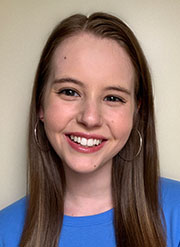 "I never forgot, so I applied and I just thought it would be a really cool internship," Kriley said. "The rest of my life is hopefully going to be very medical based. I plan to go to med school and become a doctor. I've always thought paleontology was really cool and I considered it (as a career), but I also love human biology. I just figured I'd give this a try."

Kriley is glad she did after returning from three months as one of 14 interns at the Mammoth Site. Kriley worked as a research intern where she got to dig in the bone bed, which is covered by a climate-controlled building, and work in all three of the facility's laboratories: the prep lab, where bones are cleaned after they are recovered; the collections lab, where bones are identified, along with offsite submissions; and the geospatial lab, which is equipped with 3D printers and scanners to improve the analysis. Most of the other interns were older, including master's and Ph.D. candidates, and they were studying paleontology, archeology and geology.

"I had a lot of information thrown at me, but I learned a lot and everyone was really good at explaining things to each other because everyone is specialized in different things," Kriley said. "But I was still able to bring a lot of my knowledge from anatomy (classes at SRU). Bones are pretty much the same in all mammals, so I was able to help a lot of people out with the osteology (study of bones) in collections."

Kriley said she benefitted by learning how to use the 3D scanners and printers, technology that was first applied in the medical field before it became common in paleontology. Many of the bones recovered at the site are more brittle than dinosaur fossils and they must be replicated by 3D printing and scanning for better analysis.

The Mammoth Site is a nonprofit organization and an educational and scientific research institution that is funded by tourism, memberships, donations and grants. The interns are paid and they receive housing while working regular eight-hour weekday shifts, but they also had opportunities to explore surrounding tourist attractions and other palynological sites during the weekends. Kriley and the other Mammoth Site interns attended the 2021 Dino Shindig in Ekalaka, Montana, for which visitors travel from all over the world to hear lectures from leading paleontologists and excavate an active fossil site. Kriley got to "jacket" a fossilized turtle shell, which she described as placing it in a plaster cast, to keep it intact from damage during transport. She also found a Tyrannosaurus rex coprolite (fossilized feces) and a long bone which they believed was a femur of a Triceratops.

"It was cool to go around and dig up some dinosaurs for a weekend," Kriley said.

A few of the interns also participated in the Volksmarch, one of the most popular organized hikes in the U.S. where people access the face of the Crazy Horse Memorial.

"For me, these were definitely once-in-a-lifetime opportunities and I'll never forget them," Kriley said.