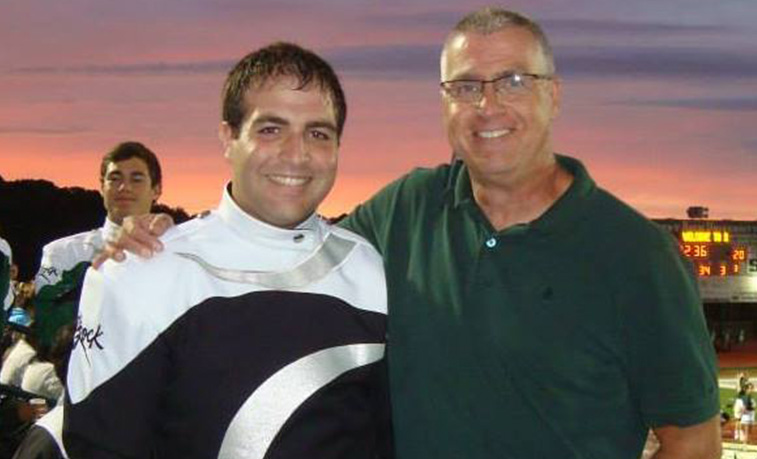 SLIPPERY ROCK, Pa. — Jeff Herwig had to get creative when it came to composing music to support military members afflicted with post-traumatic stress disorder. First was writing the three-movement symphonic piece he had in mind, one that portrays the emotional journey soldiers and veterans experience. Second was raising funds to support those same military personnel.

Typically, composers are commissioned by individual bands or as part of a consortium to write music in exchange for a fee. In Herwig's case, the 2015 Slippery Rock University graduate with a degree in music education did something that is uncommon for music composers like himself. 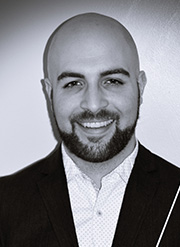 "I had this idea to write this piece, and I figured, well, maybe we can make a fundraiser out of it," said Herwig, a freelance composer and founder of M&M Music Press LLC, in addition to being the director of bands at Mercer Area High School.

Herwig decided to write the patriotic paean and sell it to schools and music groups for the relatively inexpensive fee of $50 and donate all the money to charity. Herwig's sister, Maj. Lauren Nash, who is in the U.S. Army Nursing Corps, suggested that he raise money for the Semper Fi Fund, which has provided more than $200 million in financial assistance and lifetime support to "combat wounded, critically ill and catastrophically injured" members of the armed forces and their families.

The first response Herwig received was from his alma mater via an emphatic "Heck, yes!" from Jonathan Helmick, SRU associate professor of music and director of bands. Although Helmick arrived at SRU after Herwig graduated, the two have developed a friendship and had already discussed Herwig composing a piece for the SRU Wind Ensemble, a group that Herwig performed with when he was an SRU student.

"Dr. Helmick was the first person to sign up when I put it out there," Herwig said. "He's been a wonderful supporter and it's going to be cool to write something for a group that I used to be a part of."

Though Herwig can't fully empathize what soldiers have gone through, he spent time researching interviews with military veterans suffering from PTSD to come up with a 10-minute, three-movement piece titled "Freedom." The first movement, "A Hero's Return," with patriotic melodies, portrays the joy of a soldier coming home from deployment. The second movement, "Trapped in a Memory," is darker and written in a minor key to represent the memories that trigger PTSD. The final movement, "Freedom," ends on a positive note and portrays recovery and overcoming the disorder.

"I want to represent the whole disorder through a piece of music that might be eye-opening for audience members who can't empathize with what veterans are dealing with," said Herwig, who came up with the idea last year but started writing the piece earlier this summer. "This is my way of representing what soldiers and veterans have to deal with on a daily basis. My plan is to bring about awareness and erase the stigma that surrounds this disorder and hopefully inspire people to take action, whether that's making their own fundraiser, volunteering their time or enlisting themselves."

More than 15 schools and music groups have joined the consortium thus far, meaning that Herwig will donate at least $750 to the Semper Fi Fund. The consortium includes local music groups, like the Beaver County Symphonic Wind Ensemble; college symphonies from SRU, Duquesne University, Allegheny College and Indiana University of Pennsylvania; and high school bands including North Catholic and North Hills in Pittsburgh.

The consortium will have a six-month window to premiere "Freedom" beginning in November for Veterans Day events. After May 2020, Herwig will publish the music for purchase by anyone with a portion of the lifetime sales going toward the Semper Fi Fund.

"Jeff is an outstanding teacher and musician and it's exciting to see him jumping into composition with both feet and to see him gain traction as an outlet for his talents," Helmick said. "It's exciting to see how far he's come in a short amount of time, and helping him support a good cause is a marriage of two wonderful things."

Herwig's composition work for both concert band and chamber music are available on his website, www.jeffherwig.com, including "The Bridge," which was selected as the winner of the 2019 Pennsylvania Music Educators Association Composition Contest, Adult Category.

While it is yet to be determined when the SRU Wind Ensemble will premiere "Freedom," Helmick is working with Herwig to have him meet with the ensemble this fall.

"We try to have our students interact with composers, so (the students) are not just reading music, they understand the meaning behind it," said Helmick, who is commissioning Herwig for a separate composition for fall 2020. "Also, to have him talk to our students is important because they see what an alum is doing and what can be done with the art form and their degree."

"I had an absolutely wonderful experience at SRU getting my bachelor's degree," Herwig said. "The entire University is wonderful, but the Music Department especially has world-class faculty that made my classmates and me prepared to enter the workforce right away. The program was awesome then and now it's on a whole new level with some inspired faculty like Dr. Helmick who are putting SRU on the map."