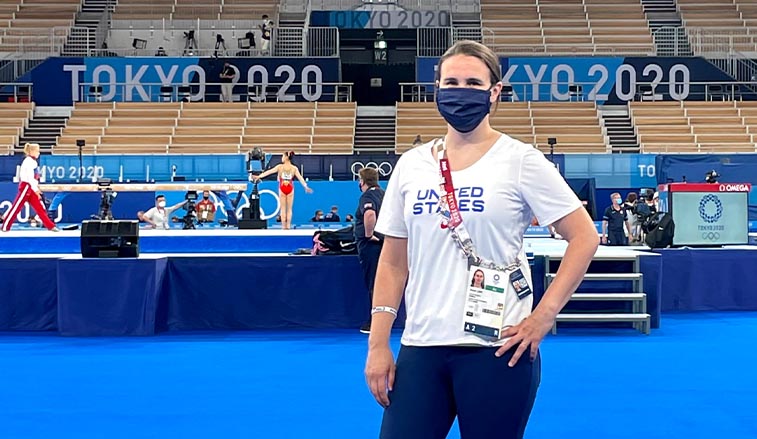 Brandi Long, a 2009 Slippery Rock University graduate with a degree in athletic training, worked her first Olympics last month in Tokyo. There were five SRU alumni working in Tokyo for the Olympic and Paralympic games this year.

SLIPPERY ROCK, Pa. — As millions of Americans watched and read about the top U.S. athletes competing in the Olympic and Paralympic Games in Tokyo this summer, there were a few who actually got to see the athletes compete in person. Among those who traveled to Japan were five Slippery Rock University alumni. But they weren't there as spectators. Instead, they had important jobs as athletic trainers and physical therapists.

Long and Lefever worked together in the USOPC's High Performance Center, providing medical care for a variety of athletes and support for team's medical staff during their stay in Japan. McDowell is the head athletic trainer for the U.S. Paralympic men's goalball team, while Kotsko is the head athletic trainer for the U.S. men's and women's boxing teams. Donaldson manages all of the USOPC sports medicine clinics, onsite at the Games and at year-round clinics across the country, including at the USOPC training center in Colorado Springs, Colorado. Donaldson was featured in the Summer 2018 issue of The Rock magazine. 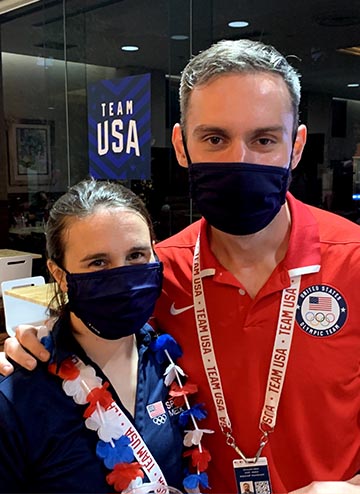 For Long, McDowell, Kotsko and Lefever, this year was their first time working the Games, although the experience for everyone is different because of no spectators and various COVID-19 safety mitigations to allow the Games to take place after they were postponed a year because of the pandemic.

"I don't know how it compares to a normal year, but it was absolutely amazing to be there with the athletes," said Long, who has worked full time as USOPC athletic trainer in Colorado Springs since 2019, working mostly with the men's gymnastics team. "We got to see them outside of their competitive nature and what people see on television, and they're all just really humble and it's so great to be able to support them. Our job is to give them a home away from home where they can be comfortable and do whatever they need to do to succeed."

The HPC is a facility that the USOPC rented in Setagaya, Japan, just south of Tokyo, where all health care services are provided to U.S. athletes, whether that's from a specialist, such a chiropractor or a massage therapist, or from athletic trainers and physical therapists. The athletes eat and train at the HPC and benefit from services that are not provided at their venues.

Although there are hundreds of medical providers who traveled to Tokyo with the U.S. athletes, not all of the sports' national governing bodies sent athletic trainers or complete medical staffs, so some athletes rely on athletic trainers such as Long for care. The HPC staff also provide support for team-specific athletic trainers, such as McDowell and Kotsko while in Japan. The HPC typically operated from 7 a.m. to 6 p.m. for treatments but hours often extended later and 24-hour care was provided.

Although the five SRU alumni working at the Games come from two different SRU programs, they share a bond from having started their careers at The Rock.

"It just goes to the education that we had at SRU," Long said. "The educational offerings and the networking opportunities we had were incredible. For me, Dr. (Bonnie) Siple and Dr. (Jacqueline) Williams (associate professors of exercise and rehabilitative sciences) really honed my skills and I learned very thoroughly the importance of networking and getting to know people in my field."

Students pursuing an MSAT at SRU are required to complete a clinical residency in their second year in the program, and having a strong alumni network helps SRU students gain valuable placements.

"We're proud to have such a strong representation of SRU alumni working in the top of their fields, including at high levels such as at the Olympics and the Paralympics," said Kim Keeley, associate professor of exercise and rehabilitative sciences, who is the athletic training program director. "We congratulate them on their hard work and for setting an example of what can be achieved with an SRU education."

More information about the athletic training (MSAT) and physical therapy (DPT) programs are available on the SRU website.