SRU class challenges students to be strategic with social media 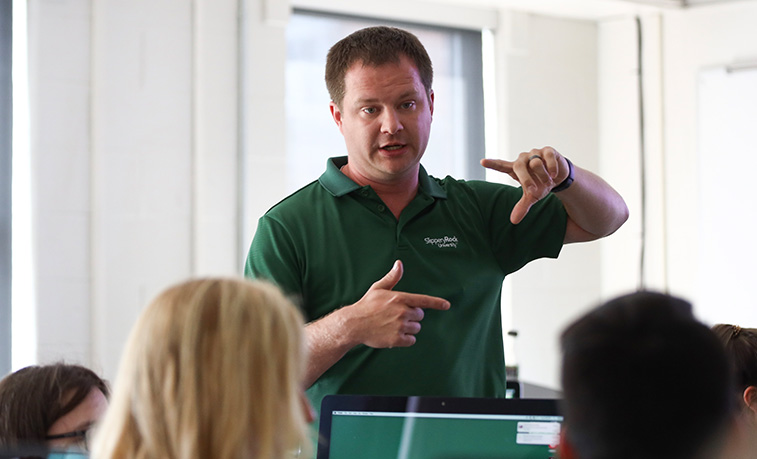 Doug Strahler, a Slippery Rock University assistant professor of communication, is teaching two sections of a 300-level social media course this semester that has replaced the traditional textbook with a curated Twitter list.

SLIPPERY ROCK, Pa. — Without question, social media has revolutionized the way in which people receive, interpret and remark on news and information. With in-the-moment reporting, living in a real-time news cycle is second nature for today's college students.

Imagine the puzzled look on the face of someone from only 20 years ago if you were trying to explain what social media is, what it does and how there are college courses on the topic, like one offered this semester at Slippery Rock University. Textbooks for the class at SRU, called Social Media, are considered obsolete, because, well, it's social media.

"I don't have a textbook for the class; I have a Twitter list that I have for students to follow because by the time you get these books (about social media) they are already outdated," said Douglas Strahler, assistant professor of communication, who is teaching two sections of a 300-level social media course this semester. "I try to show them how you use social media as strategic tools and not just fun, back-and-forth communication."

The Twitter lists Strahler provides are curated groups of Twitter accounts that students can subscribe to and follow. Strahler, who goes by @profstrahler in Twitter parlance, selected accounts for the class' Twitter list from news outlets and experts related to social media, such as @socialmedia2day and @briansolis, to replace a traditional textbook. He also encourages students to use the hashtag #SRUSM for content related to the class.

Strahler recommends students curate their own Twitter lists. For a class exercise, he had students come up with a list as if they were social media managers for an organization; for example, a list of Butler County restaurants for the Butler County Chamber of Commerce's Twitter account. 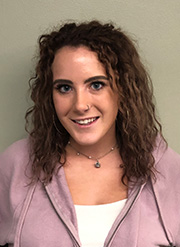 "One of the biggest goals of the class is to teach students how to set up a social media strategy on behalf of an organization," said Strahler, who does just that as the social media director for the Eastern Communication Association, a professional organization of scholars, teachers and students of communication studies.

"Managing social media for an organization can be applicable to the (students' careers) as well," said Strahler, a 2005 SRU graduate with a degree in communication. "And how you present yourself on social media is important because employers are going to be out there finding you."

Strahler is acutely aware of the importance of using social media for more than just social interaction. For his dissertation, while earning his doctoral degree in instructional technology and leadership from Duquesne University, he found that educational professionals he studied used social media more for professional development, such as staying up to date with industry news, than any other reason. Motivations for using social media among the general public are mostly to stay in touch with friends as family, with as many as 42% of responders in a 2017 GlobalWebIndex survey claiming that as a primary reason for using social media. Also, nearly half of the survey's responders ages 16-24 use social media to find entertaining content.

However, college students preparing to start careers can be conflicted about their social media use. Haley Potter, a senior communication major from Leechburg, is taking the social media class this semester and already has a visible social media presence as a reporter for WSRU-TV, SRU's student-run television broadcast and video production company.

"There's a fine line between posting about your social life and being that person who is just so professional all the time," said Potter, an aspiring news anchor who interned this summer with WICU-TV in Erie. "We learn that in a lot of our communication classes that you are a brand and you have to put yourself out there in a way you want to be perceived by potential employers."

Strahler encourages students to be strategic about their online persona and understand their audience, such as wearing professional attire in their profile image if they aspire to work in the banking industry or a more artistic or casual approach to represent targeting a more a creative or artistic avenue.

"Your social media presence doesn't have to be completely professional," said Strahler, who added that he shares his interest in craft beers and fantasy football on social media. "You can make it personal to an extent, but you want to show how you are prepared for your industry."

Another student in the social media class is already working in her industry. Delaney Gagen, a junior communication major from Butler, is head of marketing and social media for SAPIA Source, a small, start-up technology trade company based in London, England. Gagen interned with the company during her study-abroad experience last year at Kingston University and continues to work 30 hours per week remotely from Slippery Rock as she completes her SRU degree.

"Taking this class will help my messaging toward a target audience and better utilizing the medium," Gagen said. "Some of that is trial and error."

However, erring on the side of caution is how Gagen and her friends think when using their personal social media accounts.

"People are very self-conscious," Gagen said. "(Most of my friends) won't even post anything anymore because, before you get a job, the employer will research your social media. (My friends) are hesitant because once it's out there, it's out there."

Strahler and students in the class said that college students will often "cleanse" their accounts at some point during their college career, deleting older posts that could be potentially embarrassing, while some might change the name on their account to a pseudonym, change the privacy settings to limit access to the account or delete the account all together.

Because smartphones have created instantaneous access points to everything about everything, Strahler said it's good for people reflect before they react when it comes to posting on social media. "You should always ask yourself, 'Is this going to hurt my reputation?' or 'Is it that important to share my thoughts at this moment?,'" said Strahler. However, he also encourages students to engage on social media and use it to their advantage for professional development.

"Part of being engaged on social media is about setting yourself up with a positive professional persona," Strahler said. "Twitter can be a great networking tool, so rather than tweeting about how bad the weather is in Slippery Rock, start tweeting about things that interest you, things you noticed in the news, your experiences or examples of your work. That way, when a potential employer sees the work you're doing, they see that you are passionate about that work and well versed in the topic."