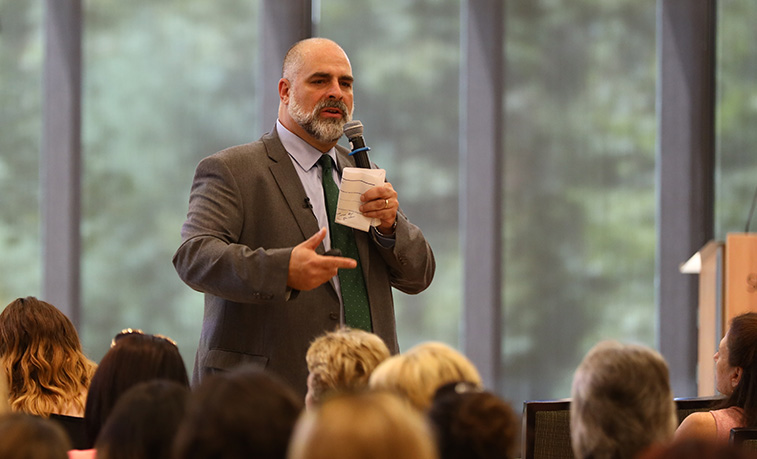 SLIPPERY ROCK, Pa. — Dwindling numbers of high school graduates and declining state appropriations are enough to put a damper on the mood at any college campus, but at Slippery Rock University, President William Behre wants something to be perfectly clear: "SRU is in a strong position and we intend to keep it that way."

And with those words, the second-year president delivered his opening year comments to students, faculty and staff at SRU's Fall Assembly.

"Our goal, in short order, is to deliver excellence in education," Behre continued. "And to do that, we must take it upon ourselves to improve our financial resiliency in order to better fulfill that mission.

"Let me say it again, we're in really good shape - both financially and from an enrollment standpoint - but we can do better and in order to not only maintain our place, but thrive in the face of adversity, we will.

"That means that we must act now to avoid future financial challenges by controlling the things we can and not lamenting about those that we cannot. We can choose to shape what we can control and what our future will look like, so we will."

As part of that choice, Behre dispelled the notion that the University would be faced with having to cut any academic programs, layoff people or initiate a hiring "freeze."

"Rather, I'd say, at the moment we're in a hiring 'slush,'" he said. "Because a freeze doesn't work. If our entire police department retired tomorrow, would I say 'Sorry, we're in a hiring freeze. We no longer have a police department.' Of course not, but what a slush means is that as we move forward, we are going to be more strategic about our hiring - especially the timing.

"Before we hire someone, we're going to ask, 'Is the hire related to the health and safety of our campus? Is it related to business continuity?' There are hires we have to act on immediately and we will. Then there are those that are less so, and if they are less so, and a department can wait a month or two following a departure or retirement before bringing on that new hire, that couple of months of savings on salary and benefits, a few departments at a time, can add up quickly and help us conserve funds."

As for academic programming, Behre said with a smile: "There is no truth to the rumor that I have a secret file in my desk that says we're going to close 'Program 'X.' Truth be told, there are some programs that don't perform as well as many others and that's okay because a university it supposed to offer an array of programs. What we have to ask ourselves is this, if we have an underperforming program, how do we tweak it and build its numbers so it's on more solid ground? Or, ask the question, can or should this program be saved?"

Telling the assembly he wanted to focus attention on how the University could take more control of its financial future, Behre spoke about a variety of initiatives the University is planning. These include a capital campaign, restructuring tuition and financial aid strategies, improving retention and graduation rates, pushing out-of-state recruitment and building new revenue streams.

"We're currently in the silent phase of a capital campaign, but don't tell anyone, because it's silent, so you can't say anything," he said with a laugh. "A silent phase simply means that we are in the process of planning a campaign, we are already accepting donations toward that campaign and we are working with a consultant to figure out what our ultimate goal should be."

As to restructuring the University's pricing and financial aid strategies, Behre said, "One of the best thing to happen since I've been here is the potential for us to set our own tuition structure.

"In running a large organization, you have two major elements: costs and revenues. Our costs are primarily people and those costs are negotiated outside of this University. That's not good or bad, it just is. Most of our revenue also is negotiated for us. The Board of Governors set the tuition rate and the legislature determines our appropriation

"Following this year's decision by the Board of Governors to freeze tuition rates, we're developing our own pricing strategy. We believe that since we have the best brand in the west, we can probably charge a little more in the future. What we will do with that extra is redirect a portion of it into need- and merit-based scholarships. And if we talking about a modest increase, something like $179 per student, which is not a lot, we can direct a portion of the increase to help benefit students who are not persisting because of financial aid issues."

And while SRU boasts a strong 66% graduation rate, Behre cautioned there is room for improvement. "How many of you drove to work today?," he asked. "Would you get in your car if it had a 34% failure rate? We do better than most of our peers and we certainly need to celebrate that. Then we need to stop patting ourselves on the back and ask how can we help that other 34% graduate. We can and will do better."

SRU will also intensify its out-of-state recruiting efforts. "We did really well with in-state enrollment this year, but with high school graduation numbers falling, we have to look beyond our border ... whether that's Ohio, Illinois, New Jersey, wherever. We have quality programming and we have a quality staff and faculty. It's time to let more students outside of our walls know about it."

Behre said the University is exploring several options to build new revenue streams. These include looking to partner with corporations differently and embracing the potential for developing market-driven professional and/or degree and non-degree programs for industry. "We'll look at opportunities to explore customization of master's degree programs that would benefit particular companies and their employees and actively seek out those potential revenue streams."

A key part of Behre's address utilized an interactive glide path to demonstrate the relationship between expenses and revenue. Changing key variables such as tuition revenue, appropriations, faculty and staff costs and improvements in retention and graduation rates, Behre showed how each impacted the intersection of when expenses exceeded revenues and vice versa. "As this glidepath demonstrates, we have to be very strategic about how and where we are investing our resources."

Reactions to Behre's presentation were positive.

"It was good to see how our everything fits into the larger picture, especially from a budget standpoint," said Ashleigh Schuler, a senior dance major from Williamsport. "I feel like President Behre cares about all aspects of the University, from a financial standpoint and from the experience of the students and employees. I feel like our president cares about everyone here."

"We are facing a lot of challenges and I appreciate President Behre being very upfront with us regarding the nature of those challenges," said Stentor Danielson, associate professor of geography, geology and environment and department chair. "He extended the 'Don't panic' message but also the 'Don't relax' message. It's good to get a sense of where the administration wants to take us as a University and understand what they see as the major challenges we face so that as any changes that roll down to our level we understand the purpose of it and how it fits into the larger picture."

"It's important to be educated on what's going on," said Joyce Basham, clerk typist in the Office of Environmental Health and Safety. "(It's encouraging) that they are going to look at people's jobs but not lay anyone off. There's a focus on faculty and students, but the staff are important too to keep this University moving. We're here for the students, yes, but as the staff we keep everything rolling. The educators teach the students but the staff keeps the University running."

"My goal today was to be as transparent as possible; to share the message that we are in a strong position but we need to proactively address the challenges we face to keep us there. Many of the recommendations will require heroic activity. Fortunately, the Rock family is made up of heroes," Behre said.