SRU’s Snyder pens ‘What is a Veteran, Anyway?’ Robert Snyder, SRU professor of elementary education, shows off the University's colors while deployed as an Army officer in Iraq. Snyder served there in 2003-2004.

SLIPPERY ROCK, Pa. - Drawing on his own experience as a soldier in the U.S. Army, as well as an educator, Robert Snyder, Slippery Rock University professor of elementary education, has written a children's book explaining the veteran experience.

"What is a Veteran, Anyway?" will be published Sept. 26 by Blue Marlin Publications. The book's publishing was timed to precede Veterans Day, Nov. 11.

Snyder said he wrote the book, which was illustrated by Ron Himler, for teachers, parents and children in order to provide insight into the "sacrifices and camaraderie of the veteran experience." 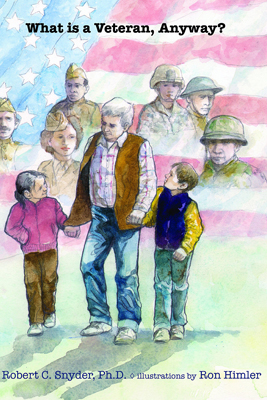 "It emphasizes what veterans go through on a daily bases in a simple-to-read format," Snyder said. "Most importantly, it was written based on my 15 years of service in the U.S. Army, including a one-year tour of Bagdad, Iraq."

Snyder, a 1992 graduate of the ROTC program at SRU, received a commission as an officer in the Army Reserve Military Police Corps. In 2003-04, he served as the operations officer for the 400th Military Police Battalion in Baghdad, Iraq, in support of Operation Enduring Freedom and Operation Iraqi Freedom. His unit provided convoy security between Baghdad and Kuwait and operated seven prisons in the Iraqi capital.

"The life-changing experience portrayed within the book is done in a way that non-military authors cannot describe or explain without living the life of a solider under the extreme conditions faced by combat veterans," Snyder said. "The aim is to allow children to relate their own life experiences to the everyday sacrifices veterans make whether deployed overseas or training in peacetime."

Snyder said the book narrative also promotes the importance of Veterans Day, which SRU traditionally recognizes with a series of events each year.

Snyder, whose military career ended honorably in 2007, has taught at SRU for 16 years. He was a finalist for SRU's "President's Award for Teaching Excellence" in 2008."Veterans Day is a wonderful holiday for citizens to recognize the brave men and women who keep us free," he said. "As an elementary school teacher for 10 years, I found few children's books for teachers and parents to use that really encompass what Veterans Day really means."

Snyder plans to share his book with his students through a series of workshops on how to use children's literature in explaining Veterans Day.