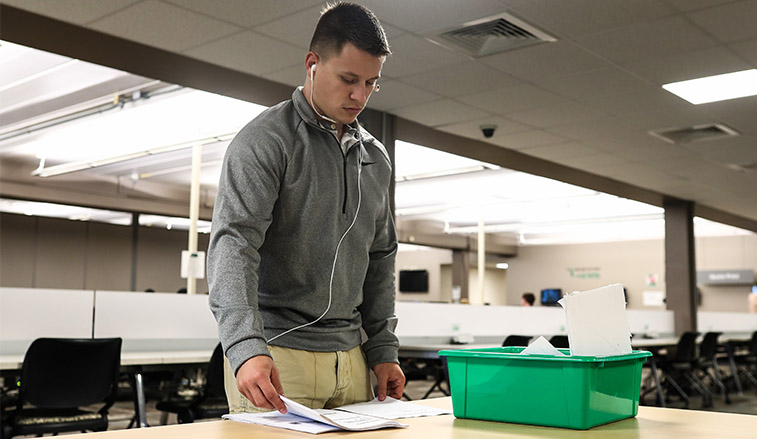 During the 2017-18 academic year, printers on the first floor of the Bailey Library churned out 1.7 million pages of material.

SLIPPERY ROCK, Pa. - Slippery Rock University has long prided itself on being a "green" institution. From being ranked among the world's most environmentally friendly colleges and universities by the University of Indonesia's GreenMetric World University Rankings to being named a "Cool School" by The Sierra Club, reducing the University's carbon footprint is at the forefront of nearly everything the institution does.

As part of that environmental push, SRU's Bailey Library is asking students to "think before they print" in an effort to reduce the amount of paper being consumed by the University.

"Trying to make any sort of seismic shift in people's routines requires baby steps but with students doing the right thing, we can make an impact on our carbon footprint" said Jennifer Bartek, manager of library operations for Bailey Library.

For Bartek and other faculty members at the library, the first step is to educate students on the amount of paper being used. During the 2017-18 academic year printers on the first floor of the library churned out 1.7 million pages.

To reduce consumption, Bartek and John Ziegler, associate provost of the Information and Administrative Technology Services, believe students must be the catalyst in cutting back on paper waste.

"Students can help a great deal just by using their laptops rather than printing hard copies of PowerPoint presentations," Ziegler said. "Reviewing materials such as that on a screen rather than having a hard copy in your hands may seem like a small thing but if everyone were to do that, it would make a huge impact."

Ziegler said that paper waste is another area where students need to be more aware, adding that the library is doing its part by reusing and recycling previously printed on paper.

"We have adopted multiple ways of recycling and reusing paper in the library through the cover pages produced by the printers," said Bartek.

First and foremost is the simple act of recycling the cover pages via recycling bins at each printer station. A second use is repurposing the paper to Slippery Rock Student Government Association Child Care Center for craft projects with its students.

According to Bartek, "The most crucial aspect of this movement is to educate students on what we in the library are trying to do and how they can help us in reducing our carbon footprint."