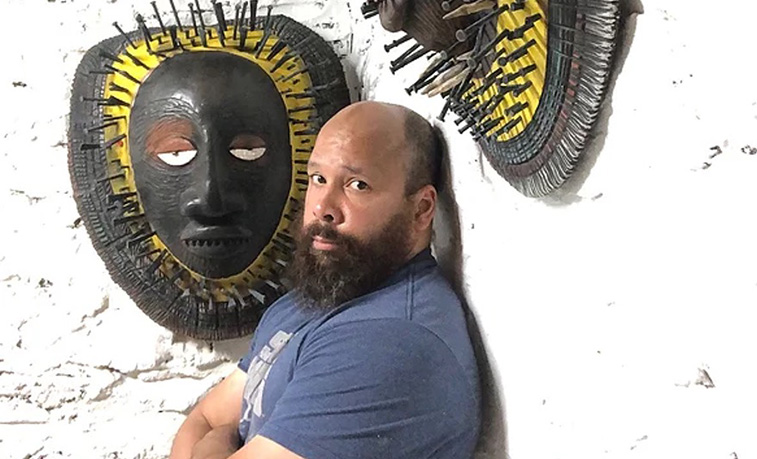 Sharif Bey, a 1998 Slippery Rock University graduate with a bachelor’s degree in fine arts: ceramics, will virtually showcase his work, “Aqua Phoenix,” at the Pittsburgh Glass Center’s Art on Fire auction Sept. 25, via the GiveSmart platform.

SLIPPERY ROCK, Pa. — Sharif Bey, a 1998 Slippery Rock University graduate with a bachelor's degree in fine arts: ceramics, will be featured as the honorary artist at the Pittsburgh Glass Center's Art on Fire auction Sept. 25.

Bey, an associate professor of art and art education at Syracuse University, will have his sculpture "Aqua Phoenix" featured alongside 142 other one-of-a-kind creations by 120 artists at Pittsburgh's only glass art auction. The annual auction aids the center in supporting artists of the Pittsburgh Glass Center.

"Aqua Phoenix" is an example of Bey's work with both clay and glass mediums to create decorative wall hangings that feature iridescent, bird-like centerpieces.

"What distinguishes this piece is its unique compositional elements of clay and glass, and how compared to previous projects, this single strand necklace features central glass rings that connect them," said Bey.

Pieces like "Aqua Phoenix" are just one example of mixed-media sculptures that Bey creates with inspiration provided by contemporary African American culture and the visual heritage of Africa and Oceania.

Originally from the Beltzhoover neighborhood of Pittsburgh, Bey has had his works featured in 32 group and solo exhibitions, including the Renwick Gallery of the Smithsonian American Art Museum.

His path to discovering a love for ceramics began with an exploration into the arts at a young age that eventually led him to Carnegie Mellon University's pre-college art program as well as the Manchester Craftsmen's Guild Apprenticeship program. It was through the MCGA program that Bey would connect with the SRU community, learning about the University's Second Annual Arts Academy in 1990.

Bey would go on to pursue his BFA in ceramics at The Rock, and, after graduating, would earn a master's degree in fine arts at the University of North Carolina at Greensboro (2000) and a doctoral degree in art education at Pennsylvania State University (2007).

Bey said that it was while attending graduate school that he started to shift his work from conservative pottery to more sculpturing.

Inspired by trips abroad, many of Bey's pieces are in the "power figure" or nkisi style, a mode of sculpture originating from central Africa, most notably the Congo Republic. A power figure is said to be a magical charm seemingly carved in the likeness of a human being, meant to highlight its function in human affairs.

A spirit of "trying new things" led Bey to the Pittsburgh Glass Center to participate in their Idea Furnace program where he would be a resident artist from 2017-18. The purpose of the Idea Furnace is to offer non-glass artists an opportunity to learn about glass-making processes to develop "creative alliances and truly inspired works," according to the Pittsburgh Glass Center website.

"While the residency was not supposed to last that long, they had found additional funding to extend my experience and I was amazed and grateful," said Bey. "Though, as I began teaching, I had fewer days per week to pursue glassmaking so I would spend two days working somewhere around 11 hours, and there would be renegade weekends where I would go and work with the technician to get as much done as we could."

Those hours provided Bey with different creative approaches and appreciations given the different mediums he was working with.

"Manipulating glass, as opposed to clay, is a different process with regard to not only time but how things move when conceiving an idea," Bey said. "To get five or so forms in glass takes much more time and a labor-intensive investment to have them realize their potential versus clay."

Given his past involvement - and success - with the Pittsburgh Glass Center, Bey's involvement as the honorary artist for this year's auction is a "bit of a homecoming" for the local artist.

And while the event has traditionally been hosted in person, this year's auction will occur online due to the COVID-19 pandemic. Prospective art enthusiasts can view and bid on pieces now through Sept. 25. An online celebration will be hosted at 7 p.m., Sept. 25, via the GiveSmart platform.

The Pittsburgh Glass Center is a nonprofit, public-access education center offering classes as well as visits to the center's art gallery or state-of-the-art glass studio.