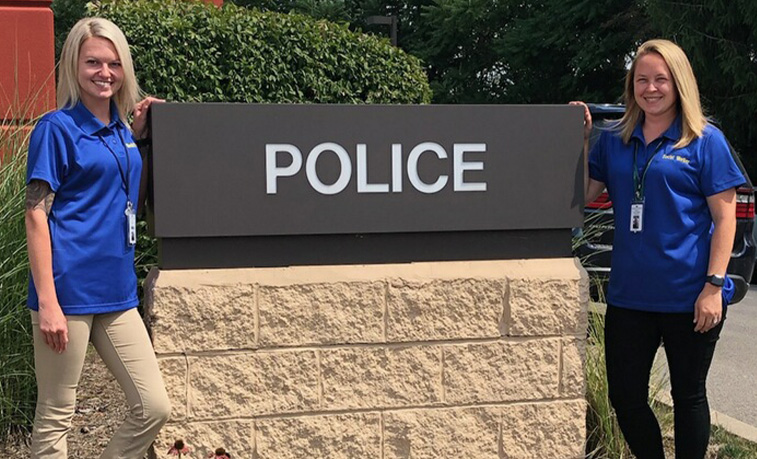 From left, Slippery Rock University students Kaylee Kihn and Angela Kenbok stand outside the Hampton Township Police Department. They are two of three SRU social work graduate students who are interning with police departments this year as police social workers.

SLIPPERY ROCK, Pa. — For three Slippery Rock University students, the stereotypical internship chores of making copies, brewing coffee or emptying the trash are long gone. Instead, the students, each enrolled in SRU's Master of Social Work program, find themselves embedded within local law enforcement operations as police social workers, helping to de-escalate situations and applying their area of expertise.

"What we do goes hand in hand with the police officers," said Angela Kenbok, a graduate student majoring in social work from Pittsburgh. "I've been going on calls with the officers, learning more about their codes, how to read incident reports and how they handle certain situations. But then, on the other side of things, we're the ones providing them with more resources for their residents and teaching them about certain mental health or addiction issues."

"This experience will give me hands-on interaction with individuals and families in crisis moments," Kihn said. "It will expand my competency within different populations, and I will gain knowledge in many aspects of social work."

The work the SRU students are doing is part of an emerging profession in an area called forensic social work, a specialized area of practice where social services are offered within the criminal justice system. They interact and help victims of abuse, people suffering from mental illness and criminals after they are charged with a crime.

"Police social workers can perform a variety of duties," said Yvonne Eaton-Stull, associate professor of public health and social work. "They accompany police and assist in actual crisis intervention once a scene is secure. Once police do their job first, then the social workers can lend their expertise, especially in areas like domestic violence, mental health and substance abuse."

Coincidentally, each of the three SRU students have separate backgrounds treating people in each of those areas: Zinn with domestic violence victims, Kenbok with substance abusers and Kihn with mental health patients. For example, when Kenbok was an undergraduate student at SRU, she worked part time as a counselor at an inpatient drug and alcohol facility.

"I couldn't imagine coming to a police department as my first-ever internship or job in the field because it does require some experience," Kenbok said. "But the neat thing about this opportunity (with HTPD) is they're trusting our experience and our education in the field and allowing us to participate in as many calls as possible."

Still, it can be unnerving because not many college interns have to wear bulletproof vests while on the job.

"Going on a police call can cause (the stirring of) many emotions," Kihn said. "There is excitement because it is a new experience and I can use my knowledge to help those involved. There is curiosity because I don't always know the details of the calls before I leave. But with every call I go on, I feel compassion. I am there to do whatever I can do to help de-escalate individuals, give them resources, or even just be supportive and listen to them."

That's not to say police officers are unable to apply similar approaches than those of social workers; sometimes just having a third-party mediator can make a difference.

"Sometimes when police officers show up to these types of calls, we de-escalate them just by showing up," said Thomas Vulakovich, chief of police, Hampton Township. "But there are times that our uniform, the mere presence of it, has a tendency to escalate somebody, especially someone going through a mental health crisis. The fact that we have somebody who's not a police officer and who has training in de-escalation that's related to mental health, they may be able to better identify things quicker than an officer because they are educated and are able to relay that information to us. They're not seen as so much of a threat."

How common police social workers are varies by departments and the size of precincts, whether it's embedded social workers like the SRU interns or third-party agencies who are on call to respond. But according to Vulakovich, the placement of SRU interns has gotten the attention of nearby police departments.

"All the municipalities around us have found out that we have this program and I've gotten a lot of inquiries about it," Vulakovich said. "They realize there is a need for this type of profession. Within law enforcement, there's a lot of things that we can learn from (social workers), and there are a lot of things that they can learn from us. We're considered first responders, and in a way, the social workers can be part of that first responder list because they're going to be potentially right there during a crisis."

Vulakovich stressed that social workers aren't put in harm's way and they are only brought in once a scene in secure, but social workers are considered a valuable resource at a scene or as a follow-up in the days after an incident.

"Simply making an arrest is not enough try to resolve (issues) in the long run, and that's where the social workers come in," Vulakovich said. "We let the social worker step in and see if they can make a better impact on that family or that individual.

Police departments have always played a role in their communities, but in places like New Castle their support casts are expanding. Chris Frye, the mayor of New Castle, helped create community-based initiatives after he was elected the city's mayor last year.

"For many years, the New Castle Police Department, under the direction of Chief Robert Salem, has made community relations a priority," said Frye, who is also an SRU part-time instructor of public health and social work. "Recently, Chief Salem and I created a Community Affairs Bureau to identify and address problems within the community. The CAB will focus on untapped demographics and solicit interaction to achieve goals and resolve issues. By partnering with SRU's Social Work Master's program, the CAB now has the opportunity to include forensic social work frameworks into it mission and effectively assess people in their environments."

"These partnerships go a long way because it really is going to give students an experience that they're not going to get most places," Eaton-Stull said. "It also can open up doors for other police departments that are seeing the success of New Castle and Hampton Township, and it sets SRU apart because we're one of a very few MSW programs (in the country) that has a specialization in forensic social work."

The SRU interns are working 16 hours per week for the entire academic year. While their work does include going out on police calls, they also perform outreach to connect resources with residents and they are available for counseling appointments at the police station. There are many nuances to police social work, but for students like Kenbok, she gets to apply a trait that's universal to social work.

"It really comes down to compassion and applying that in field of social work," said Kenbok, who said she would consider police social work as a permanent job after graduating, in addition to continuing her work as a drug and alcohol counselor.

"I want to get one step ahead of people who are coming to inpatient (counseling). By looking into the forensic side of things, this experience helps me understand what I can do as a social worker before people get into legal trouble.

"I didn't come into this field expecting to work in all these positive situations. I came into the field wanting to make a change for people and helping them get one step closer to recovery or wherever they need to be."