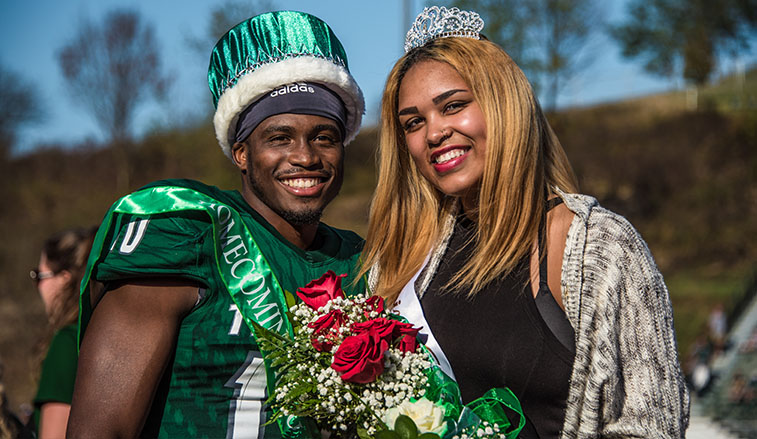 SLIPPERY ROCK, Pa. - When halftime of Slippery Rock University's Oct. 13 game versus Edinboro University arrives, the time-honored tradition of introducing the University community to the homecoming court will take place as usual.

However, that ritual comes with a new twist for 2018. No longer will SRU crown a king and queen, rather, Rock Nation will welcome "homecoming royalty."

Following the 2017 event, SRU students of different gender identities and expressions shared with the student-driven homecoming committee that many "felt uncomfortable" participating in the homecoming court voting process due to the gender specific roles traditionally assigned to males as "kings" and females as "queens."

"We want our students, no matter how they identify, to be a part of the process," said Courtney Mullins, a student affairs in higher education graduate student from State College and homecoming committee graduate supervisor. "We wanted to focus on getting rid of the gender roles between King and Queen and focus on the individual. At the end of the day, it's about the person who's running and how they represent the SRU community, how they represent their major and how they're involved (on campus), regardless of their gender, gender identity or gender expression."

SRU's transition to "homecoming royalty" began in the spring when homecoming committee members reached out to their PSU counterparts to investigate the process of making the transition. "This is something we need to do as a University in order to make us more gender inclusive," said Kelly Lane, a senior early childhood and special education major from Beaver and chairperson of the homecoming committee.

Rather than running for a spot on the court in pairs as in the past, SRU students will now run for and be elected to the court as an individual. Ten candidates will be chosen through the election process to represent SRU as homecoming royalty."

All participants running for the homecoming court will be held to a "campaign budget" of $50 in which to promote their candidacy in an effort to keep campaigning affordable for all.

"We're trying to help everyone out (by establishing a budget ceiling)," said Mullins. "We don't want running for the court to stress anyone out or create a financial strain. We just want students who are passionate about being on the homecoming court showing their Rock Pride and to have an opportunity to run if they so choose."

Students interested in running for homecoming royalty can apply via the CORE homepage no later than 3 p.m., Sept. 27. To be eligible, students must be able to fulfill all of the following requirements:
• Must be a full time undergraduate or graduate student at SRU
o Undergraduates must have completed a minimum of 60 credit hours. Graduate students must have completed a minimum of nine credit hours at SRU.
o Must have a minimum 3.0 GPA.
• Cannot be a past homecoming court member.
• Must be nominated by a registered student organization/residence hall. (Organizations/residence halls are allowed to submit two individuals for homecoming royalty).
• Or, submit a petition with 50 enrolled SRU student signatures.

"The homecoming committee is very excited to announce the evolution of homecoming royalty," said Lauren Moran, director of student engagement and leadership. "The overall goal of homecoming is to create an experience for all students to show their Rock Pride. Removing the gendered titles of king and queen, creates a more inclusive environment, where all students can feel comfortable to participate in one of the longest standing traditions at SRU. Students selected as homecoming royalty should be a true representative of what it means to be an SRU student and now all students have the opportunity to represent the campus community."