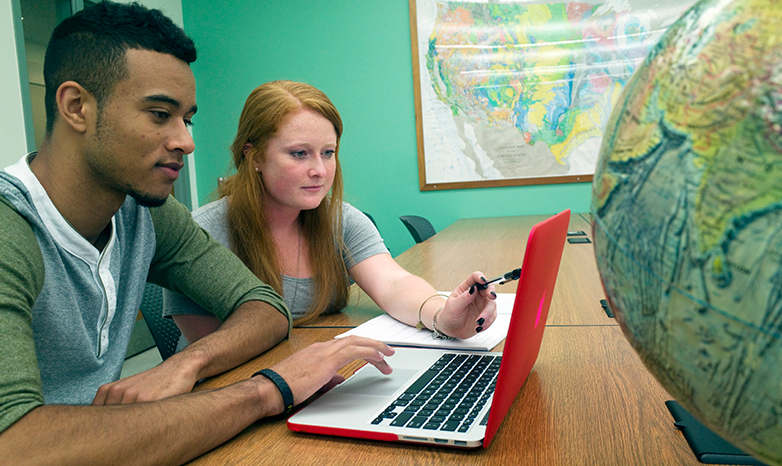 (From left): Jamay Wellington, a Slippery Rock University freshman from Elmira, New York, works with Kara Spade, an environmental studies major from Warren, during a STEM community for exploratory students meteorology class taught by Julie Snow, professor of geography, geology and the environment.

SLIPPERY ROCK, Pa. - Freshman year is a difficult time for many college students. Many are independent for the first time and living with people they don't know under a completely new set of circumstances.

Those factors are multiplied for those students deemed to be from "at risk" backgrounds.

Academic challenges, debt or family problems put many that fall into this category in danger of dropping out. In fact, over the past 20 years, 10 million college students nationwide left school before the start of their sophomore year, according to the National Student Clearinghouse, a provider of educational reporting.

With a mission based in preparing its students for success in life as well as a career, Slippery Rock University offers several connect-for-success programs for first-year students. One of them, an exploratory science program dubbed "STEM community for exploratory students," is marking its fourth year. The one-semester program supports those students who are at risk of leaving the University because they do not have a declared major.

The program places students in 16 credits of classes taught by faculty who give them the extra help they need to successfully connect with peers and professors, pick a major and - most importantly - stay in school. 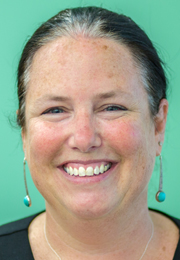 "Many of these students don't have a traditional home that they belong to, so by placing them in this setting, we're giving them a home of sorts," said Julie Snow, professor of geography, geology and environment, who teaches meteorology to students involved in the program. "These students are in the same classes together the whole time."

"Most of these students have an interest in science, which is particularly underrepresented in minorities and women," Snow said. "The idea is to bring them together with professors who are willing to work with the students to get them the help they need to make it into sophomore year."

In addition to Snow's meteorology class, students take computer programming and critical writing along with Fyrst Seminar and liberal studies classes. SRU selects freshmen for the program based on the information students present about their interests in their orientation registration form.

Students who took part in the program's inaugural cluster four years ago said they wouldn't have reached their senior year without the additional assistance.

"I came in freshman year without a declared major, and I was from a small town," said Stephanie Angelina, a health care administration management major from Leechburg. "When I arrived, everything was so new. Looking back on my experience, I think the professors and students in this program really helped build a positive learning environment that enabled each of us to find our way to success here at SRU.

"We were able to build connections inside the classroom and carry them with us. I don't think I would be where I am without that sort of involvement."

Like Angelina, Luke Sherer, a geology major from Pittsburgh, was also undecided about a major when he entered the STEM community. Sherer said that the meteorology and geography classes taught by Snow and Jack Livingston, professor of geography, geology and the environment, provided the direction and influence necessary for him to make geology his major.

"I came to the University not knowing what I wanted to do," said Sherer. "High school wasn't very challenging for me and a lot of kids I went to school with didn't necessarily want to be there and didn't apply themselves.

"I know I wouldn't be where I am today without the STEM program. Not only did I really like the introduction I received to geography, geology and the environment; but also I liked the professors and I liked the lessons.

"(The program) allowed me to make a lot of new friends and introduced me to multiple fields of study. It all just clicked."

Since focusing on geology, Sherer has been involved in a student-faculty research project with Livingston, looking at climate change in China.

Kara Spade, an environmental studies major from Warren said that the program helped her succeed because of the connections it helped her to make. "Some of my best friends and biggest supporters came from the cluster," she said. "I am still good friends with most of them now even as a senior."

Spade added that the cluster helped her make deep connections with the faculty and staff in her major, making a positive impact and leading to her academic success.

Current freshman Taryn Razo of New Castle said she hopes to select a major by the end of the semester. "I am getting to know all the students in my classes and am making friends," she said.

"I was a little bit hesitant to start college because I was afraid that I would be wasting my time since I really didn't know what I wanted to do. I looked at other schools, but I picked SRU because of the variety of majors and opportunities for connecting academically with others."

Joe Spiegel of Erie said he attended a private high school before arriving at SRU and found it pressure-packed with excessive expectations. By comparison, SRU professors "are very nice and willing to talk anyone through the process of connecting. SRU does have high standards, but professors let me know they will not only help me find my direction, but that I will be prepared for the future."