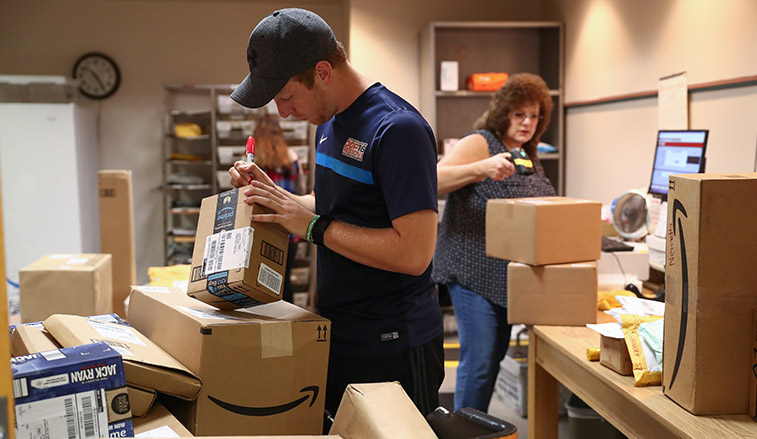 Slippery Rock University’s mailroom is processing more packages than ever. At last count, more than 15,000 parcels per semester arrived or departed to and from the University.

SLIPPERY ROCK, Pa. - Packages arriving for Slippery Rock University students come in all shapes and sizes. The University mailroom handles everything from care packages sent from parents to online orders for textbooks, futons, televisions and flowers, as well as the belongings of the occasional student who has everything shipped to campus on move-in day rather than packing a car.

And then there are those parcels that may seem a bit odd, like a flip-flop with postage and an address label taped to it, or a potato - yes, a potato. Apparently it's all in day's deliveries for the mailroom staff as more and more packages keep rolling into their University Union locale. 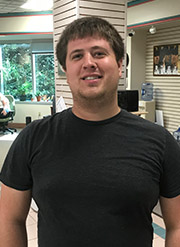 "The volume of packages has increased tremendously," said Jamie Altman, clerical supervisor in Mailing Services. "It's the ease of online ordering, and it's not just from Amazon, but places like Walmart and Target and other online retailers."

The mailroom handled 15,572 packages during the 2017 fall semester, or 5.7 per residential student, compared to 10,111 - or 3.6 per residential student - in 2014. The influx in online ordering is not just an SRU thing; last year e-commerce transactions in the U.S. grew at a pace six times faster than at brick-and-mortar stores and, according to a comScore/UPS survey, for the first time last year U.S. consumers made more than half of their purchases online.

"The package volume has blown up," said Kathy Burton, an SRU mailroom clerk for the last 18 years. "We log packages steadily throughout the day. One day we logged in nearly 800 and logged out more than 600."

According to Altman's records, on subsequent Mondays in late January 2017, they experienced the day with the most packages received at 741 and picked up at 650. The most packages handled for a one-week period was 2,187 from Jan. 22-26, 2018. Altman said on a typical Monday, the busiest day of the week, there are between 300-350 packages, both inbound and outbound.

Mailing Services handles all mail for University offices and students who live on campus, with the exception of letters and flats sent to and from students, which are transferred through the five residence hall mailrooms. Packages, or anything with a tracking number, for residential students are logged by Altman and his staff, which includes full-time clerks Burton and Christine Riding and several student-workers. To accommodate its growth and access for students, Mailing Services moved to Room 101, University Union two years ago from its previous location in the Stores Building 1.

"We're often the face of the University because we see every student at some point during their time here at SRU," said Altman, who has worked at SRU since 2015 after running a mailroom for an investigations company. "Engaging with the students is what I like best; you build relationships with the students who come in a lot and those who work for us."

Six student-workers, three per shift, cover 100 mail stops around campus twice per day, at 9:30 a.m. and again at 1 p.m., with an extra stop at Old Main and a trip to the Slippery Rock Post Office before the day's end.

"It's a lot of fun," said Robert Gorog, a senior environmental geoscience major from Freeport, who is the afternoon shift driver this semester. "You get to know all the department secretaries and they know you by name. They are always happy to see you. Everyone here is great to work with and Kathy, Chris and Jamie keep everything flowing. It's a great work environment."

Packages aren't delivered to residence halls or student's rooms like they are for offices. Not long after the University built its six residence halls in 2006, Mailing Services took over package handling to streamline the process and ensure that no package went missing. Residential students sending and receiving packages must come to the mailroom in the University Union and show their student ID.

Mailing Services logs the packages into a computer system called Neo Track. Incoming packages are sorted and stored in the mailroom before a student picks them up. Despite having a centralized street address for the University, 1 Morrow Way, students are asked to include their residence hall and room number when requesting shipments. This makes the student easily identified in Neo Track and their package won't get lost, especially with some students sharing the same first and last names or students going by different first names than what's in the directory, such as T.J. or Katie.

When a package is ready for pick-up, a student will receive an email from Altman. Sometimes couriers or companies like Amazon will notify the recipient that a package was delivered, but Altman said students still have to wait until they are notified by him. After all, the staff could have 750 other packages to process that day.

"It's like Christmas morning for a lot of students because they forget what they ordered or someone ordered something for them," said Altman, who noted that the Christmas shopping season doesn't affect their workflow because it occurs between semesters. However, other holidays do, like when Halloween costumes arrive or the mailroom has to store chocolates and flowers in a refrigerator around Valentine's Day.

For more information or questions about the University mailroom, call 724.738.2059.