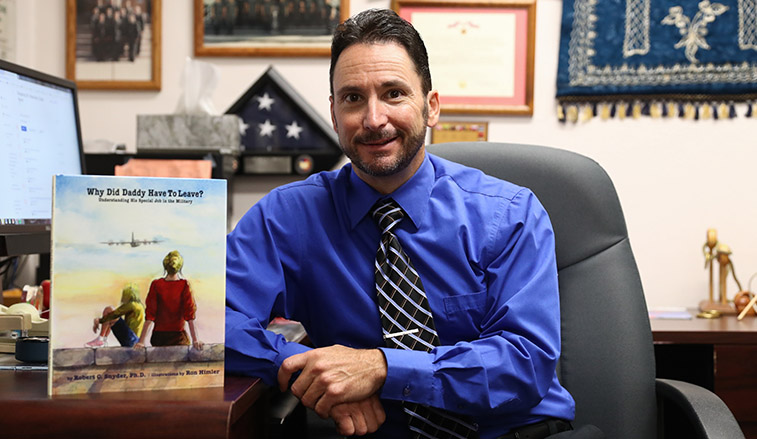 Robert Snyder, a Slippery Rock University professor of elementary education and early childhood, released his second children’s book, “Why Did Daddy Have to Leave?,” in June. Snyder will host a workshop about the children’s book writing process, Oct. 12 at the University’s Leadership Development Center.

SLIPPERY ROCK, Pa. - Robert Snyder first considered writing children's books when he was an elementary school teacher in the mid-1990s. But it would be nearly a decade before he put pen to paper - or perhaps fingers to keys - while on deployment to Iraq in 2003 as an Army reservist. It would then be another 13 years before that first book was published.

Snyder has his author's rhythm down after he released his second book three months ago. Having traveled the long road from idea to tome, Snyder is now sharing with other would-be writers what he learned throughout the process.

Snyder, a Slippery Rock University professor of elementary education and early childhood, will host a workshop called "How to Write a Children's Book and Find a Publisher," at 1 p.m., Oct. 12 at SRU's Leadership Development Center.

"I'll explain the whole process of how a children's book comes together," Snyder said. "I've had other people come to me over the years and say, 'I have this idea for a children's book.' It's something that is popular and other people want to do it because it's so meaningful to educate children through books. But it's not easy to do."

Snyder served 15 years in the U.S. Army Reserves Military Police, including one year of deployment in Iraq supporting Operation Enduring Freedom. Snyder had already transitioned from a public school teacher to an SRU faculty member when he was deployed. While in Iraq, he drafted manuscripts for multiple children's books, often when his battalion's convoy security operations between Baghdad and Kuwait were halted because of sandstorms.

Thinking from the perspective of his students and his own children, Bethany and Patrick, who were in second grade and kindergarten at the time, Snyder wrote about veterans, active military and children in military families.

"Veterans know what they're talking about, but they don't all know how to talk at a level kids can understand," Snyder said. "It takes that combination of someone who is a teacher - or who's been a teacher - who's also a veteran, to bring those messages together in a way that is developmentally appropriate for kids."

Despite being the perfect author to fill a void in a market that did not have many books written by veterans for children, Snyder struggled to gain traction. He signed a book deal in 2006 but the publisher went bankrupt. He retained the copyright but put the books on hold as his personal and professional lives took precedent, but in 2016 he signed with Blue Marlin Publications and released his first book, "What is a Veteran, Anyway?"

"You can't just blast an email out to publishers and say, 'Here's my idea,'" Snyder said. "You have to find one (publisher) and submit the manuscripts and wait a few months while they review it. That's a long, drawn out process. Fortunately for me, I had a publisher who had an interest in the military and it was a topic that hadn't been really touched upon by many people. There were a few others but none written by a veteran. That gave me a lot of creditability that I was able to speak and write about the topic I knew firsthand."

"What is a Veteran, Anyway?" was well-received, making a list of 2017 Notable Social Studies Trade Books for Young People by the National Council for the Social Studies and the Children's Book Council. He followed that up with the June 2018 release of a more targeted book for children of active-duty military titled "Why Did Daddy Have to Leave?"

"Having a deployed parent leads children through a bunch of different emotions," said Snyder, who wrote the second book using a child's voice to narrate the story. "School psychologists are using this book for students with separation issues, so it's nice to see it being used as a resource and reaching kids who need it."

Snyder has visited nearly 50 schools, including stops in Virginia and North Carolina, for assemblies, but because of his classroom commitments at SRU, he tethers himself mostly to the local area, particularly around Veterans Day.

But before he begins presenting to school children again this academic year, Snyder will offer tips at SRU for aspiring children's book authors or anyone who is simply interested in his work and the process. The Oct. 12 workshop is part of the Leadership Development Center's professional development programming to cultivate lifelong learning. While the programs are typically open to only SRU faculty, staff and student workers, Snyder's workshop is open to the general public.

"I didn't have anyone in the business to give me insider tips as to how to go about the process in an efficient manner that can reliably work," said Snyder, who will share everything from finding the right publisher and writing a query letter to developing a manuscript and working with an illustrator. "This is a way for me to share what I had to learn the hard way about the process and let others in on things that I had to research and develop on my own."