SLIPPERY ROCK, Pa. — Each day in the office, Kevin McCarthy wades through a river of data in his role as director of analytics and decision support in Slippery Rock University's Office of Planning, Resource Management and Assessment. So it comes as no surprise that when he's away from his work he also uses spreadsheets to track one of his leisure activities: open-water swimming. But McCarthy has learned to accept and appreciate uncertainties of open-water swimming, and in doing so, he won his first competitive race, the Three Rivers Marathon Swim, a 30-kilometer swimming race in Pittsburgh, Sept. 11.

"There are lot of unknowns in that open water, things that you can't see," McCarthy said. "And that's very different from my everyday life."

McCarthy has always enjoyed swimming, from being part of competitive teams as a youth to keeping in shape through adulthood by swimming laps at the local YMCAs. In January 2020, shortly after turning 38, and with a milestone birthday fewer than two years away, McCarthy decided to train for a long-distance, open-water swimming race. There are longer and more popular races than the Three Rivers Marathon Swim, such as the 28.5-mile race around Manhattan, but McCarthy set his swimming goggles on Pittsburgh, having grown up in Ross Township and having an emotional attachment to the city. 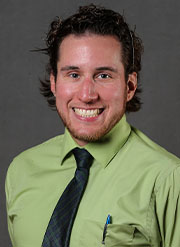 "I had never done any open-water, long-distance swim before, let alone a 30-kilometer race," McCarthy said. "As I was nearing 40, I wanted to mark the decade, so to speak, with some sort of physical challenge to give myself something to strive for, but also to demonstrate to myself that fitness is not age-specific. People can be exceptional and be strong decades after their high school or college years.

"Our best years aren't necessarily behind us; they can be before us. I saw friends and colleagues who are older than me maintaining physical fitness and doing amazing things, but I needed to show myself that I could do that, too."

But rarely is anyone capable of swimming up and down stream for 10 kilometers in each of Pittsburgh's three rivers: the Allegheny, Monongahela and the Ohio. Only six swimmers even entered the grueling race. McCarthy won with a time of nine hours, 21 minutes.

"I was less thrilled about coming in first than I was just finishing under 10 hours, or even finishing at all, that was such an achievement for me because I'm competing against myself," McCarthy said. "I'm constantly comparing myself to my own expectations -- to the time on the clock, to how I feel at the end of each (lap), if I could keep going or how well my technique is --so I'm constantly comparing myself to what I think I should be able to do."

As a data analyst who helps administrators set and reach goals for the University based on facts and projections, McCarthy followed a rigid training regimen that followed gradual increases in weekly yardage. At first, he was swimming three mornings per week to reach anywhere from 7,000 to 10,000 total yards. Then he'd increase no more than 10% each week until he worked his way up to 32,000 yards in a week, and adding additional days on the weekends to reach his weekly goals. Most of his swims were in a controlled environment at the YMCA pools in Grove City and Butler. Although he had a few training swims outdoors at Moraine State Park, the Three Rivers Marathon Swim was the first time he swam in a river.

"There's a frightening aspect to getting into any open body of water and you can't see the bottom or what's underneath you," McCarthy said. "In the rivers that I swam, the farthest that you could really see was probably three feet below - it was all brown. You come to terms and come to peace with that uncertainty and have to be comfortable with that. That's really a valuable lesson for all other aspects of my life where I don't always have uncertainty. I don't know necessarily what's coming."

There's also the challenge of spending all those hours without entertainment, such as listening to music or a podcast.

"It's more mental than it is physical," McCarthy said. "It's an opportunity for really long, sustained introspection because you're left alone with your thoughts."

This is not to say that McCarthy was completely alone. Three Rivers Marathon Swim organizers require at least three kayakers to accompany each participant. One of the kayakers accompanying McCarthy was Lorraine Craven, a friend and former SRU assistant professor in academic services. They provide the swimmers with food and Gatorade, which McCarthy stopped to consume about every 30 minutes and rest for about 1-3 minutes. McCarthy's husband, Patrick Beswick, SRU director of residence life, cheered McCarthy at various points during the race.

McCarthy hasn't thought too much about what's next, but he took a few weeks off and he plans to return to the pool this week. He still has until December before he turns 40.

"There are (open-water races) in December, but you have to go to another continent," McCarthy said with a laugh. "I didn't want to commit myself to something like that."