SRU research project comes to a head thanks to NSF grant 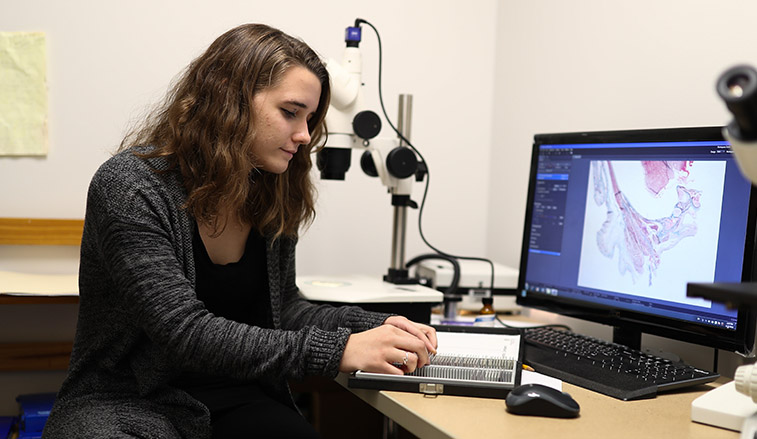 Rebecca Reynolds, a junior biology major at Slippery Rock University, prepares samples that will be used in a research study of cranial structures of primates, analyzed by faculty and students from SRU, Ohio State University and the University of Florida.

SLIPPERY ROCK, Pa. - There's some heady research going on at Slippery Rock University that could help humans wrap their brains around what's holding all their gray matter together.

Last month, a research group consisting of faculty and students from SRU, Ohio State University and the University of Florida embarked on a study to examine how cranial growth determines skull shape. To better understand the human skull, the researchers are analyzing the cranial base structures of other types of primates thanks in part to a $109,470 grant from the National Science Foundation. 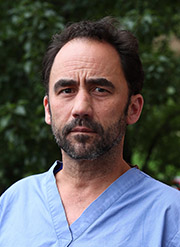 "If you look at every critter around, humans look pretty weird," said Tim Smith, SRU professor of physical therapy, who specializes in anatomy. "Humans have an unusual head shape for a mammal and it's rather distinctive among primates, with a flexed cranial base and pushed-in faces. We want to draw an inference of how much of that is bone growth and how much of that is indirectly due to brain growth."

Humans have relatively large brains and what Smith calls an evolutionary "packaging problem" to hold it all together, but studying cranial development in humans is difficult because several joints called synchondroses are only present in the cranial base at a young age, most of which are only active in newborns before disappearing.

"Luckily there are enough primates that look like us in certain ways that we can use them as comparative models," said Smith, who, along with the other researchers, will analyze nearly 100 specimens from 11 types of primate species, including squirrel monkeys, lemurs and baboons. All of the specimens being analyzed died from natural causes.

What the researchers are most interested in are the synchondroses, which Smith compares to growth plates that cause long bones, like a femur, to lengthen in adolescents. Instead, the synchondroses causes the cranial base to grow, with cartilage cells enlarging and dividing to push the synchondroses apart and expand the skull.

"In humans, (the synchondroses) are interesting because there are hypotheses that they may be responsible for the bending that happens in the cranial base," Smith said. "This amount of bending in humans is extreme."

The descriptive and inferential statistics gathered from the research will inform scientists and the medical community about cranial base structures that are currently believed to be similar in all primates, helping them better understand different growth patterns and adaptations over time. The study may also benefit clinical research and treatments for children with cranial malformations.

The research team at SRU consists of Smith; Gabe Hughes, a graduate student in physical therapy from Lancaster; and Rebecca Reynolds, a junior biology major from Wexford.

Reynolds is an aspiring cytotechnologist, which is a laboratory professional who studies cells and cellular anomalies. She was referred to Smith by Susan Rehorek, professor of biology, after Reynolds took a histology course at SRU last year.

Reynolds is paid through the NSF grant to work in the neurohistology lab at SRU, where she is applying what she learned in histology. Reynolds sections and stains samples, which were stabilized in formic acid for 3-5 weeks; before embedding them in paraffin wax; cutting them to 10 microns, or a hundredth of a millimeter; and placing them on slides. Dozens of slides per specimen are digitized so that researchers can view the cranial structures collectively through computer software, much like a CT scan that shows bones, organs and soft tissues but instead they can see all the tissue structures in greater detail, including the synchondroses.

"It's really satisfying to see it all come together and be part of something bigger like this," said Reynolds, who is working up to five hours per week in the lab. "It's a great experience that I can apply to a job (after graduation). I love research and being able to get a taste of what it all entails. It's a really great opportunity."

Also contributing to the research is coauthor Valerie DeLeon, associate professor of anthropology at UF, who is working under a separate grant worth nearly $130,000, analyzing the shapes of primate skulls early in development. Another coauthor, James Cray, associate professor of anatomy at OSU, is assisting with microscopic methods, using antibodies to target cell characteristics. Both DeLeon and Cray also have students working with them.

Smith collaborated with DeLeon on a previous NSF grant related to facial development of primates, which spurred the research for the current study, which is under the third and largest NSF award that Smith has received since he arrived at SRU in 1996. Smith previously worked with Cray when they were doctoral students at the University of Pittsburgh.

The research team anticipates publishing as many as three manuscripts from the cranial base research over the next three years.